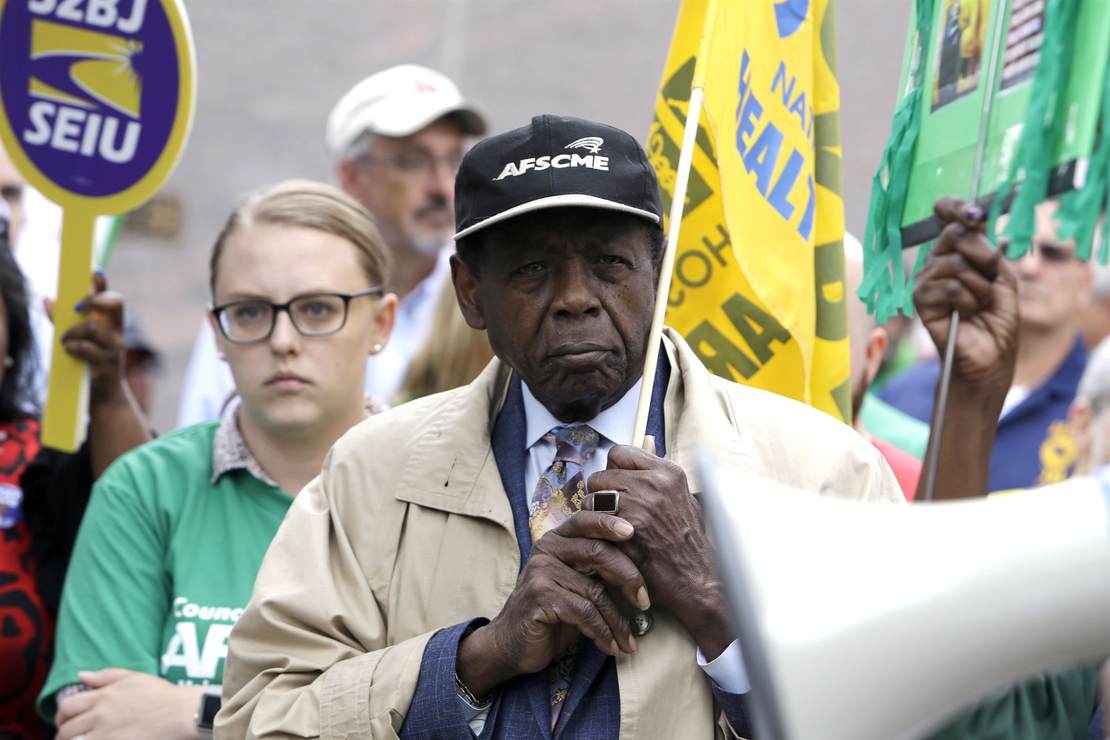 The American Federation of State, County, and Municipal Employees (AFSCME) and the California Statewide Law Enforcement Agency (CSLEA) are two heads on the same hydra of corruption that is endemic within labor unions. These same labor unions that President Joe Biden claims built America and the middle class are being exposed, once again, for their corrupt practices–both in robbing its members of their money, and the First Amendment right to opt-out of membership as secured by the 2018 Supreme Court decision in Janus v. AFSCME.

The City, a local New York journalism site reports on the latest political end-run by AFSCME at the uncovering of corruption in the Local 1549 chapter.

The union local representing New York City’s public sector clerical workers was placed under  administratorship by its international union, the American Federation of State, County and Municipal Employees (AFSCME), over allegations of financial mismanagement, THE CITY has learned.

Local 1549 of District Council 37 announced the local’s day-to-day operations are under the control of the international union “effective immediately” following an audit that revealed “serious deficiencies and numerous violations of AFSCME’s Financial Standards Code,” according to a letter addressed to rank-and-file members dated Sept. 19.

A draft version of the audit obtained by THE CITY revealed questionable payments to a former employee of the local working as a consultant, gift cards given to union staffers not properly tracked, and $45,500 in car service expenses by ousted Local 1549 President Eddie Rodriguez that never should have been covered by the union.

Also flagged: $257,000 in American Express charges, where “in many instances, the union business purpose of the charges was not explained.” Auditors stated: “Local 1549’s practices here are very concerning.”

This is not Local 1549’s first time at the rodeo. Their financial excesses and comeuppance seem to come every 20 years or so. In 1999, it was vote-rigging, embezzlement, and questionable spending to the tune of $2 million:

A top District Council 37 officer who has been under investigation for alleged vote-rigging and embezzlement was suspended yesterday after union officials discovered $2 million in questionable spending.

Al Diop, president of the 120,000-member municipal union’s second-largest local, and three of his top officers were suspended for racking up $910,000 on corporate credit cards and for another $1 million in “unexplained” payments, DC 37 officials said.

“Let our action today send a message,” McEntee said. “We are working aggressively to root out problems and we are acting decisively to remove those engaged in wrongdoing.”

Diop was sentenced to up to four years in prison. Rodriguez’ fate is yet to be seen.

What is clear is that union corruption continues to strip actual, dues-paying members of their money and their power. Union leaders like Liz Shuler, who recently took up the reins of power at the AFL-CIO, blather on about bargaining rights, benefits, and protections, while robbing the coffers that are supposed to be paying for those so-called protections.

This is one of the many reasons why members are exercising their First Amendment right to opt out of union membership. Thanks to the 2018 SCOTUS Janus decision, workers like these clerical employees are no longer beholden to fund the corrupt practices and political ideation of their unions. In a RedState guest op-ed back in May, the writer rightly posited:

Come to think of it, the unions aren’t slugs at all. They’re leeches sucking on the consistent flow of taxpayer subsidies. And as long as the status quo is maintained, and nothing is done to address the corruption, the First Amendment rights of hardworking and honest employees like Mike Craine will be forfeited.

In California, another scheme to divest employees of their money and blunt their First Amendment rights is being challenged. This case could be as landmark as the Janus ruling and deepen its precedent.

From the National Right to Work Foundation:

Orange County, CA, lifeguard Jonathan Savas and 20 of his Southern California colleagues have just submitted a petition for writ of certiorari to the United States Supreme Court, asking the Justices to hear their case challenging California Statewide Law Enforcement Agency (CSLEA) union officials’ so-called “maintenance of membership” restriction. The lifeguards are also suing State of California officials for their role in enforcing the restriction.

Savas and his colleagues argue the union-created scheme violates their rights under the 2018 Janus v. AFSCME U.S. Supreme Court decision. In Janus, the Court declared that public sector workers cannot be forced to bankroll a union without voluntarily waiving their First Amendment right to abstain from union payments. Janus was won by National Right to Work Legal Defense Foundation staff attorneys, who also represent Savas and his fellow lifeguards for free in the present case, along with the Freedom Foundation and Mariah Gondeiro of Tyler Bursh, LLP.

Under the “maintenance of membership” requirement, CSLEA union bosses and the State of California force the lifeguards to both remain formal union members and supply full union dues payments to the CSLEA union against their will. Savas and the other plaintiffs sent messages resigning their union memberships and ending dues authorizations back in September 2019, but union officials denied their requests, alleging they must remain full members until 2023 or be fired. Despite Janus, a three-judge panel of the Ninth Circuit Court of Appeals ruled that this requirement does not violate the First Amendment.

National Right to Work Legal Defense Foundation attorneys have also filed a petition for writ of certiorari on behalf or Dolores Polk and other California in-home caregivers, challenging a similar union scheme using an “escape period” to limit their Janus right to cut off union dues to just a handful of days per year. Service Employees International Union (SEIU), another head on the hydra of corruption, has its filthy fangs all over this one.

“Deep Dive” article? Reporters didn’t even get their toes wet. Gallup reported 58% of workers today are “not interested at all” in joining unions. Unions declined over the past 2-3 generations because they grew obsolete/ irrelevant. Investigate #PROact #AB5 #ABCtest to learn why. https://t.co/qcHElDqDkb

The Biden administration and Democrats in Congress continue their scorched earth campaign to wipe out the ability of Americans to exercise their constitutional rights, including that right to work as they choose, independent of unions. Democrats continue to push the PRO Act, with its restrictive ABC Test, which would force independent professionals into employee status in order to farm them into union membership.

The choice about forming or joining a union should be a worker’s choice, but it’s not a level playing field right now. The PRO Act would give workers a real choice by imposing real penalties on employers who break the law.

It will help restore some balance to our labor laws. pic.twitter.com/Y0IcieF33B

Thanks to the 59 million independent professionals who are determined to not be forced out of their livelihoods, there has been a great deal of pushback on the PRO Act, and it currently is languishing in the Senate. With a 50-50 Senate, the chances of its passage are slim, yet Democrats continue to pour milk on stupid, as the majority of them are funded by Big Labor and dependent upon those forced union dues for their elections and re-elections.

Among those pushing the hardest is Senator Patty Murray (D-WA). Murray is over the Labor Committee, and in that role, has done untold damage to hardworking American professionals and small businesses. Murray may finally be forced to pay for her sins, as she has a credible challenger for her Senate seat named Tiffany Smiley. Along with the other Senate seats in Georgia, Pennsylvania, and Arizona in play, Murray could also be vulnerable. Of course, she is tacitly avoiding taking responsibility for damages linked to the PRO Act’s passage, and is making her message about abortion rights.

Good luck with that.

Because @TheDemocrats including @RepMalinowski have left us no choice but to vote GOP if we want to keep our careers.

Despite our pleas for them to stop, Dems keep pushing ABC Test in #PROAct and other anti-independent contractor policies to wipe out our entire livelihoods.

If Republicans gain the House and the Senate, then the PRO Act can be effectively bludgeoned. If Murray and her ilk remain in power, expect to not only see more of this same Big Labor corruption, but expect cases like the lifeguards and in-home caregivers to be blocked or disappear. Along with the livelihoods of 59 million independent professionals.

Kanye West said Thursday on FNC’s “Tucker Carlson Tonight” that he liked Donald Trump. West said, “It was wild that I didn’t know how close my … END_OF_DOCUMENT_TOKEN_TO_BE_REPLACED

Drag queen "Lil Miss Hot Mess" is accusing Republican Sen. Marco Rubio of "bigotry" after the lawmaker from Florida called out the radical left in a … END_OF_DOCUMENT_TOKEN_TO_BE_REPLACED

Google is celebrating the news that Velma, one of the main characters from the widely-beloved world … END_OF_DOCUMENT_TOKEN_TO_BE_REPLACED

While I didn’t think it possible, the Democrats have found one more way to degrade and demean … END_OF_DOCUMENT_TOKEN_TO_BE_REPLACED

Ah, Joe Biden. He’s a continuing font of gaffes. A lot of the time, he seems to have no idea what he … END_OF_DOCUMENT_TOKEN_TO_BE_REPLACED