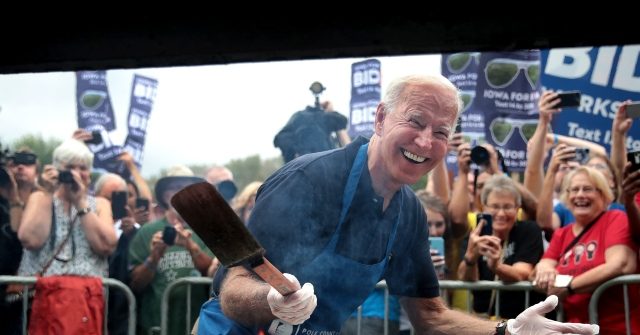 A key measure of inflation showed groceries in May costing American households 11 percent more this year than last year, the biggest annual price gain since December of 1980.

The Personal Consumption Expenditure price index for food showed on Wednesday that inflation has accelerated for at 11-consecutive months, picking up pace every month since June of 2021. Food prices were up 6.6 percent when the year started, eight percent in February, 9.2 percent in March, and 10 percent in April.

Compared with April, food prices were up 1.2 percent, up from one percent on a month-over-month basis in the prior month.

The recent month-over-month highs occurred in February and March, when prices rose 1.2 percent for two consecutive months. Food prices jumped 2.3 percent in April of 2020, when the lockdowns sent many families scrambling to hill cupboards. Those were the worst rates of month-over-month food inflation since a 1.8 percent gain in August 1980 and comparable to April 2008, when food prices rose 1.3 percent.

The PCE price index is closely watched by the Fed and used for its inflation targeting. Unlike the better-known Consumer Price Index, the PCE price index allows for consumer substitution, reflecting consumers switching between purchases when relative prices change. When households shift to purchase relatively less expensive foods due to inflation, for instance, that puts downward pressure on the PCE price index.

Advocates of watching the PCE price index say it better reflects changes in the cost of living for U.S. households. Critics say it overlooks the deterioration in quality of life when households are priced out of, say, top-quality goods and forced to buy lower-grade items.

The PCE price indexes has been lagging the CPI s and the gap between the two has expanded in recent months. The CPI barometer of food consumed at home showed prices are up 11.9 percent. Compared with April, the CPI gauge was up 1.4 percent.

The PCE price index for food includes only food purchased for off-premises consumption. This means it excludes purchases at restaurants or other dine-in outlets.

The overall PCE price index rose 0.6 percent compared with April, a faster pace than the 0.2 percent recorded in the prior month. Compared with a year ago, prices are up 6.3 percent, matching the prior month and February. In March, prices were up 6.6 percent on an annual basis.

The American Farm Bureau Federation recently reported that this year’s average cost for an Independence Day cookout is up by the most ever recorded and will be the most expensive on record. Prices of America’s favorite July 4th foods are up 17 percent compared with last year.

‘Zackly. What could possibly go wrong? Moreover, it’s not like some of us haven’t predicted it from the very beginning. TikTok, the popular … END_OF_DOCUMENT_TOKEN_TO_BE_REPLACED

The New York Times reports that police are seeking a 22-year-old white man in connection with the July 4 Highland Park attack. The individual is … END_OF_DOCUMENT_TOKEN_TO_BE_REPLACED

We’ve seen a lot of the left losing their minds over the Supreme Court’s decision to overturn Roe v. Wade while Democratic lawmakers have done all … END_OF_DOCUMENT_TOKEN_TO_BE_REPLACED

It’s difficult to be impressed by anything the Biden-Harris Administration is up to these days, but … END_OF_DOCUMENT_TOKEN_TO_BE_REPLACED

There are 91 U.S. military veterans in the 117th Congress: 17 serve in the Senate, 74 serve in the … END_OF_DOCUMENT_TOKEN_TO_BE_REPLACED

Happy Independence Day, Americans! On today’s podcast, I talk about one of the greatest recent … END_OF_DOCUMENT_TOKEN_TO_BE_REPLACED

Progressives accuse conservatives of single-handedly killing American democracy. And unless you are … END_OF_DOCUMENT_TOKEN_TO_BE_REPLACED