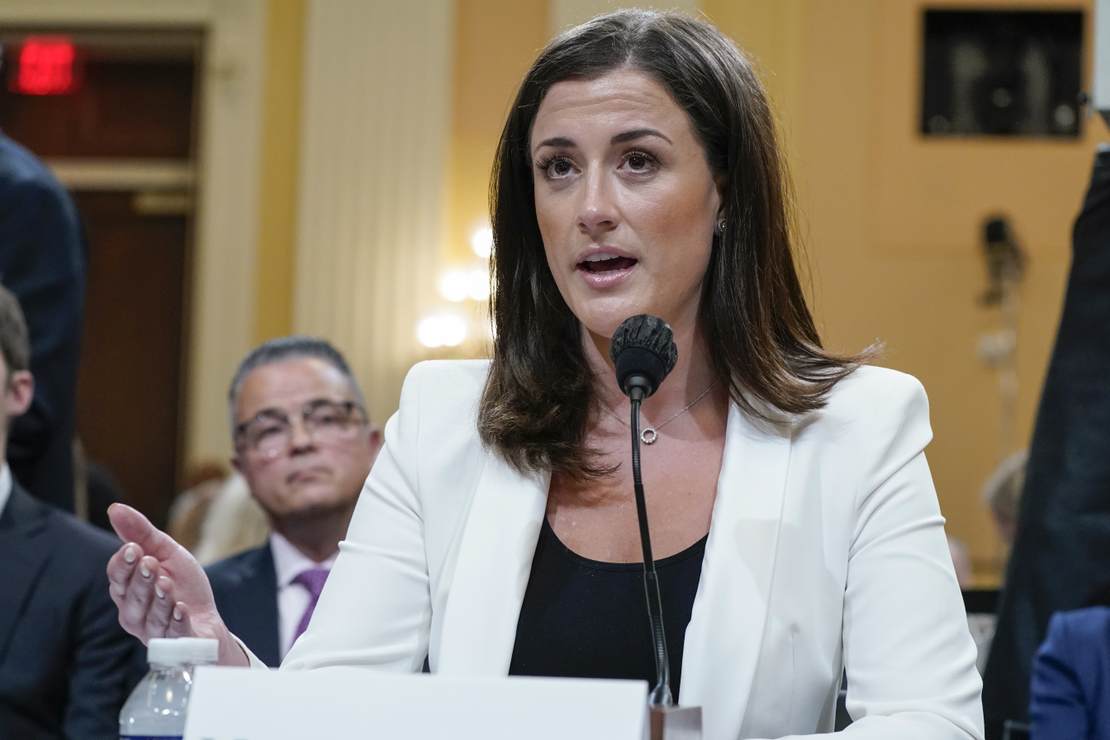 We’ve seen that the Jan. 6 Committee doesn’t have much.

They haven’t produced anything publicly to support Cassidy Hutchinson’s fantastical story that she says she was told about a superhuman President Donald Trump lunging at a Secret Service agent and grabbing the wheel of his limo “The Beast.” Even the witnesses they did produce only told hearsay tales about a “heated discussion.” The Secret Service agents she had referenced in her story reportedly said that the actions she described didn’t happen. Trump didn’t leave from the Jan. 6 rally in “The Beast,” which contradicted her story. She also claimed that she wrote a note for White House Chief of Staff Mark Meadows that Eric Herschmann had already testified he wrote. So her testimony already had holes a mile wide in it.

But as we previously reported, there were also text messages showing Hutchinson had called the Jan. 6 Committee “B.S.,” that she went to the Trump people for help with financial assistance and a lawyer, and that she was also supposed to work for the Trump team after Jan. 20 — all of which didn’t fit with her story about what she said happened. It indicated a very different person than one who testified before the Committee.

According to The Federalist, they now have more texts from Hutchinson that further blow up her credibility.

Hutchinson commiserated with other targets of the probe about how little information she had about any wrongdoing that day, and lamented how corrupt the politicized committee was. Far from being upset with Trump, Hutchinson repeatedly spoke in favor of him and his presidency.

“I would rather shoot myself dead into the Potomac than see marine one flying around this city without 45 again,” Hutchinson wrote in one message nearly three months after the Capitol riot.

In November 2021, Hutchinson was among the first former White House staffers to be subpoenaed by the Select Committee. In the weeks and months following, Hutchinson continued to disparage the politicized committee in private, and repeatedly joked about the same riot she now says leaves her with emotional scars today. Six days after she was issued a subpoena, Hutchinson called the Jan. 6 panel a “phony committee.” Around the same time, she told a former colleague her testimony would have nothing to offer.

“Other than a handful of irrelevant texts, I have literally no documents or anything they’re asking about,” one ex-White House staffer texted her.

About being subpoenaed in November, she joked that they were “f**ked by Bennie Thompson,” who is the Chair of the Jan. 6 Committee.

Hutchinson also was using “STOP THE STEAL” in messages, and had been at the U.S. Capitol on January 5, 2021 to “see our PEOPLE.” What’s more, she joked with a friend about having “an insurrection at parc Chelsea,” a D.C. apartment building, on “jan 6, 2023.” There was also a message in which she said she’d use a picture of President Trump’s rally outside the White House on January 6 as her Zoom background when she was deposed by the committee.

Hutchinson also detailed a conversation that she said she had with someone in D.C. while she was wearing a “45” t-shirt after Jan. 6.

And then I put my headphones in. The end.

Hardly the same person that we saw, seemingly so upset with Donald Trump during her public testimony before the Jan. 6 Committee. Indeed, according to The Federalist, messages showed that she called Rep. Liz Cheney (R-WY) and Rep. Adam Kinzinger (R-IL) a “crop of losers,” and said, “Their egos are too f*****g big.”

What might have caused this flip? We wrote about how she needed money and how CNN contributor and former Trump staffer Alyssa Farah Griffin (who just got named to be a co-host on “The View”) hooked Hutchinson up with Liz Cheney. Then suddenly we see a different person than the texts reveal.

The White House announced that, finally, Joe has beaten back COVID. Again. I think this was his 12th rebound from being COVID negative. For the media … END_OF_DOCUMENT_TOKEN_TO_BE_REPLACED

The Partisan Playbook AP Photo/J. Scott Applewhite The Senate is working overtime this weekend to pass the $433 billion spending bill known as the … END_OF_DOCUMENT_TOKEN_TO_BE_REPLACED

Shower rooms have changed a bit. So have Christian associations. In Port Townsend, Washington … END_OF_DOCUMENT_TOKEN_TO_BE_REPLACED

Unbelievable? Nope. Not in the least. A Jewish group at the liberal City University of New York … END_OF_DOCUMENT_TOKEN_TO_BE_REPLACED

Former Hawaii Democrat congresswoman Tulsi Gabbard, who, in one of the greatest presidential debate … END_OF_DOCUMENT_TOKEN_TO_BE_REPLACED

John Harwood, the Democratic representative from CNN, is attacking Marco Rubio for calling the … END_OF_DOCUMENT_TOKEN_TO_BE_REPLACED