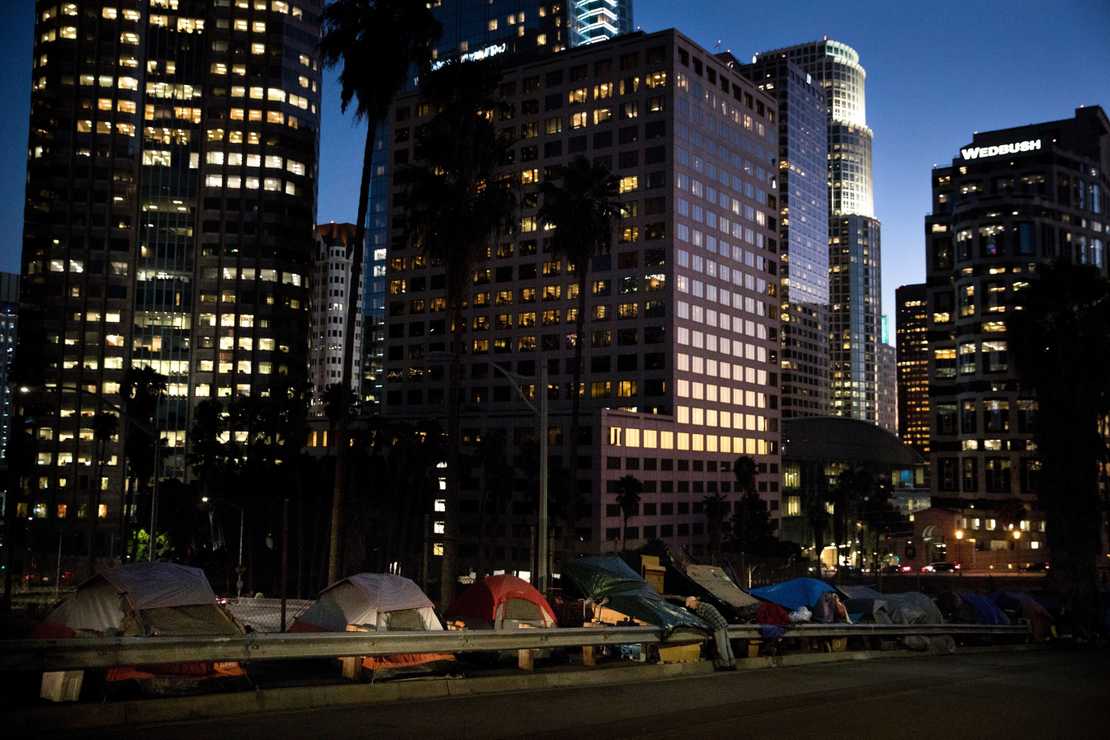 Los Angeles City Council will look to pass legislation that would open vacant hotel rooms for homeless people. If the legislation passes, every Los Angeles hotel must report vacancies. The measure states:

“Each hotel shall communicate to the Department or its designee, in a form that the Department prescribes, by 2 p.m. each day the number of available rooms at the hotel for that night.”

This is the wrong approach by the Los Angeles City Council. Of course, some families lost their jobs, couldn’t afford rent, and were forced to become homeless. Those families or individuals who are not addicted or mentally ill and/or who have children should be sheltered.

However, those with an addiction problem, whether it’s a drug or alcohol problem, and those with mental illness, should be approached differently. Under governors Jerry Brown, Gavin Newsom, and mayor Eric Garcetti, Los Angeles and the state of California have failed on the homelessness issue for years. Addiction, mental illness, and the fentanyl crisis lead the drive to homelessness. The leaders must put an end to the fentanyl crisis, as it is pouring into the United States; they must hire mental health care workers, and open up more rehabilitation centers, while funding missions to shelter the homeless while they go through rehab.

Los Angeles should take the same approach as Helping Up Mission in Baltimore, Maryland. During their grand opening of the women’s center, the mission showcased former homeless women, who went through the mission’s rehabilitation program and now work for the mission and have returned to their regular lives.

Drugs and substance abuse issues are ravaging LA’s unhoused population. I have a plan to crack down on illicit drug manufacturing and provide support to those who need it most. Learn more about my plan to help Angelenos get back on their feet at https://t.co/ukOEBhVdZh. pic.twitter.com/mAOQFX1KwW

Thomas Franklin, who is a night auditor at the Beverly Hills Marriot in West Los Angeles, was homeless 10 years ago, and he described a “chaotic” experience while living in a transitional housing program. The program had 24-hour staff and security on hand. He told the city council members:

“With all the drugs, all the fighting … we did not have the support in order to make it a successful program there … Without having a clearly defined support from policing and mental services, there’s no way that I think that this is something that we should be able to do.”

Mina Dahya owns a hotel in Hollywood; she is against this proposal.

“I am compassionate of the homeless people. I want to take care of them. But I don’t think my staff and I are ready to do the combination where I have a paid guest staying with a homeless voucher guest next door.”

“What the measure does is hurts our tourism industry, which we heavily rely on, in a time when we are getting ready for the Olympics.”

He called this proposition:

“The dumbest measure I’ve seen in my 10-year tenure as a City Council member … It’s the worst of all options as it relates to solving homelessness in the city of LA.”

The Los Angeles City Council should reconsider this proposition because it is not the right approach to solving the homelessness crisis.

Even though the Supreme Court was crystal clear in last Thursday’s opinion in NYSPRA v. Bruen that “may issue” laws requiring applicants to demonstrate “good cause” or a “justifiable need” are unconstitutional, the Maryland State Police and the state Attorney General’s office have yet to update their standards for applying for a carry license, saying only that the Court’s decision is “under review.” Now, the head of one of the leading Second Amendment groups in the state is encouraging gun owners to apply for their licenses and promising to sue the state if they don’t accept and adopt the Court’s decision immediately.

Maryland Shall Issue’s Mark Pennak says the “good and substantial reason” language in the state’s current concealed carry permit application is clearly a violation of the Second Amendment, and that any more delays will lead to the state getting hauled into court for depriving residents of their constitutional rights.

The Maryland State Police and the Maryland Attorney General’s office say the state handgun permit process remains in effect but is being reviewed, according to spokespersons for the agencies.

“The Maryland State Police Licensing Division is aware of the US Supreme Court’s decision and it is under legal review by the Attorney General’s Office,” said the agency in a written statement.

Any changes to permitting rules and procedures will be announced on the Maryland State Police Licensing Division webpage.

As new applications for permits continue to pile up, Pennak says anymore delay will be a recipe for “an avalanche” of lawsuits directed at Maryland Attorney General Brian Frosh.

“So the more he delays the longer that queue will be, and the more likelihood the state will pay some more lawsuits,” Pennak warned.

Key Maryland legislators plan to meet Wednesday to discuss strategies on how the state can comply with the Supreme Court ruling without putting more guns on the street.

Here’s a hint for those “key” lawmakers: you cannot comply with the Supreme Court’s decision if you’re preventing the average citizen from obtaining a license that allows them to carry in most publicly accessible places. And given that there are likely hundreds of thousands of Marylanders who would like to carry a firearm in self-defense, it’s inevitable that a true “shall issue” system will in fact lead to “more guns on the street.” In fact, in vocally stating that they want to continue to deprive the average citizen of their right to bear arms in self-defense, these lawmakers have demonstrated that they have no real intention of complying with the Court’s decision. Sure, they may drop the “good and substantial reason” language, but as long as their goal is to limit the number of law-abiding Marylanders legally carrying firearms it’s nonsensical for them to claim that they’re following the directions by the Supreme Court.

We’re going to get into a deeper discussion about this on today’s Cam & Co this afternoon, but I’d remind Maryland AG Brian Frosh and all the other anti-gun politicians what the Bruen decision actually said about what the right to bear arms protects.

Throughout modern Anglo-American history, the right to keep and bear arms in public has traditionally been subject to well-defined restrictions governing the intent for which one could carry arms, the manner of carry, or the exceptional circumstances under which one could not carry arms. But apart from a handful of late19th-century jurisdictions, the historical record compiled by respondents does not demonstrate a tradition of broadly prohibiting the public carry of commonly used firearms for self-defense. Nor is there any such historical tradition limiting public carry only to those law-abiding citizens who demonstrate a special need for self-defense.

According to Thomas, there must be “exceptional circumstances” in order for a law-abiding gun owner to be deprived of their right to carry, and the broader the prohibition, the more likely it is to be unconstitutional. This is not a recipe for “anyone to carry any gun anywhere at all times,” as gun control activists have falsely claimed, but it is a declaration that most Americans possess the right to carry a firearm that’s in common use for self-defense in most publicly accessible places. It’s a real right, in other words, and it has to be treated as such.

While Maryland Democrats are vowing to do everything they can to prevent more residents from carrying a gun to protect themselves, the city of Baltimore is on pace for its eighth straight year with more than 300 homicides. None of the state’s gun control laws have curtailed violent crime in its most populous city, and yet the same Democrats who are working to make it as hard as possible to protect yourself from violent criminals are also making life easier for criminals, including rejecting a proposal by Republicans in the state legislature to make theft of a firearm a felony offense as well as a plan by Gov. Larry Hogan to increase the penalties for repeat violent offenders. Their “public safety plan” looks to empower criminals far more than it protects public safety, especially when they’re intent on making it impossible for the general public to protect themselves.

Joe Biden’s Chief of Staff, Ron Klain, is pretty confident that the Biden administration and the Democratic Party as a whole will have enough … END_OF_DOCUMENT_TOKEN_TO_BE_REPLACED

EAGLE PASS, Texas — For one Texas ranch manager, dealing with the daily trespasses of migrants through the property is becoming almost unbearable. Ben … END_OF_DOCUMENT_TOKEN_TO_BE_REPLACED

Thursday on MSNBC’s “The ReidOut,” network host Tiffany Cross warned that “a civil war is here” amid violent rhetoric regarding the FBI. Cross … END_OF_DOCUMENT_TOKEN_TO_BE_REPLACED

There is no shortage of “anti-racism” grifters. The author of “White Fragility,” Robin DiAngelo tops … END_OF_DOCUMENT_TOKEN_TO_BE_REPLACED

A federal judge has already granted an injunction blocking the town of Superior, Colorado’s … END_OF_DOCUMENT_TOKEN_TO_BE_REPLACED

According to a Rasmussen poll published on Thursday, 53% of voters now agree with the statement that … END_OF_DOCUMENT_TOKEN_TO_BE_REPLACED

Note: This “Moore to the Point” commentary aired on NewsTalkSTL on Friday, August 19th. Audio … END_OF_DOCUMENT_TOKEN_TO_BE_REPLACED

The school shooting in Uvalde, TXs shook the nation to its core. It’s unsurprising, though. We … END_OF_DOCUMENT_TOKEN_TO_BE_REPLACED