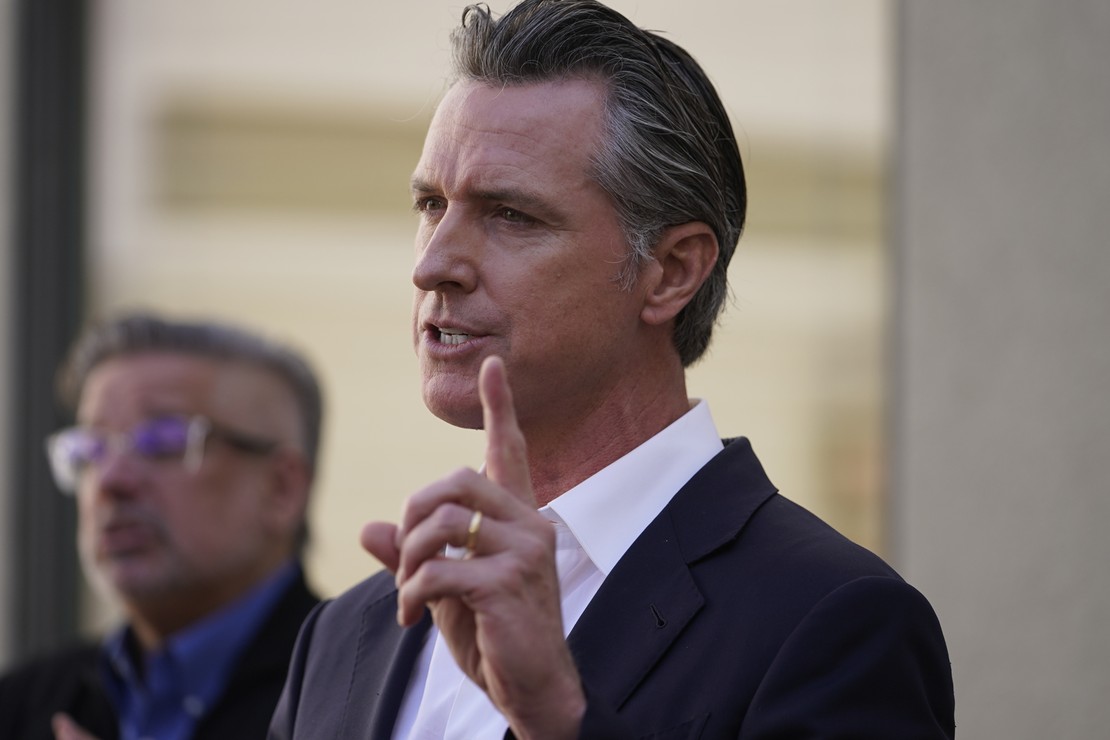 It appears that the “Climate Change Mitigation Strategist” on the California State Water Resources Control Board has stepped down, making a splash with a resignation letter that blames Governor Gavin Newsom and his administration, as well as his own colleagues, for California’s inability to manage its climate crisis.

What that has to do with water is a mystery yet to be solved.

From The Los Angeles Times:

In his time at the California State Water Resources Control Board, Max Gomberg has witnessed the state grapple with two devastating droughts and the accelerating effects of climate change.

Now, after 10 years of recommending strategies for making California more water resilient, the board’s climate and conservation manager is calling it quits. The reason: He no longer believes Gov. Gavin Newsom and his administration are willing to pursue the sorts of transformational changes necessary in an age of growing aridification.

In a resignation note posted online this month, Gomberg accused the governor of siding with defenders of the status quo and also faulted those in his agency who failed to push back.

“Witnessing the agency’s ability to tackle big challenges nearly eviscerated by this Administration has been gut wrenching,” Gomberg wrote. “The way some of you have simply rolled over and accepted this has also been difficult to watch.”

Here are some excerpts from Gomberg’s letter. It’s quite the read:

I am sharing my parting thoughts because I believe in facing hard truths and difficult decisions. These are dark and uncertain times, both because fascists are regaining power and because climate change is rapidly decreasing the habitability of many places.

If “Climate Change” is a euphemism for Progressive leadership, then, Yeah. The growing inhabitability of the state has everything to do with 20 years of progressives running the state into the ground and ignoring what matters to the citizens of the state. Ensuring that water continues to flow for urban, rural, and farm dwellers, and that we find ways to store and replenish it, is of extreme concern. But decade after decade, it has gotten short shrift in the name of climate change.

If that makes us fascists, so be it.

Sadly, this state is not on a path towards steep cuts in greenhouse gas emissions reductions, massive construction to alleviate the housing crisis, quickly and permanently reducing agriculture to manage the loss of water to aridification, and reducing law enforcement and carceral budgets and reallocating resources to programs that actually increase public health and safety. All of these (and more) are necessary for an equitable and livable future.

What the fudge cakes does this have to do with water? “[P]ermanently reducing agriculture?” Sounds like language straight out of a Klaus Schwab speech.

I think at some level many of you know this, yet you convince yourselves that inhabiting the middle ground between advocates and industry (and other status quo defenders) makes you reasonable. But it does not. It makes you complicit.

He seems nice. Bureaucratic organizations like a “water resource board” are supposed to be the middle ground that brings those two together. What a dumb statement.

After knifing his fellow travelers above, he tries to compliment them.

To my Water Board colleagues:

Witnessing the agency’s ability to tackle big challenges nearly eviscerated by this Administration has been gut wrenching. The way some of you have simply rolled over and accepted this has also been difficult to watch. However, your commitment to racial equity is a reason for optimism.

Again, what does this have to do with water management for what used to be a highly populous state? Along with U.S. Secretary of Transportation Pete “Mr. Mom” Buttigieg’s Racist Roads, are we now trying to correct Racist Waterways?

Is there anyone in Sacramento who does not live in clown world?!

Asking for a friend…

Over a decade of working for this Board I have had the privilege of working with dedicated and caring people on important policies, and for that I am grateful. Together we have advanced safe, accessible, and affordable water for marginalized communities, reduced urban water waste, and forced conversations about equity within the climate resilience discourse.

Yet Californians live with warnings of perpetual drought and are constantly asked to reduce or stop our water use, when this board has done nothing to help store and conserve the water the state does receive. From my understanding, part of this Board’s job is to resolve and mitigate drought and water crisis, yet a reservoir has not been built in over 30 years (and we’ve voted for that to happen a number of times), and their Mini-Mes on local water boards keep voting down desalinization efforts.

Not one mention of that from Mr. Equity Water.

I will continue rooting for those of you willing to fight for people and environment against industry, the right-wing death cult, and status-quo defenders. Raise your voice, express dissent, organize together, and use all of the tools at your disposal. And if you ever need a pep talk, I’ll be there.

This falls into the “Friends like these,” category. Gomberg just insulted his fellow travelers and called them ineffective and complicit. So, why would they want to call him about anything?

In appreciation and solidarity,

Max
“Power concedes nothing without a demand. It never did and it never will.”

The end quote is quite ironic. On the one hand, his resignation and letter prove that he effectively has no power at all. On the other hand, from his perceived position of power, he made demands and got nothing in return. So, essentially, the resignation is the concession.

The delusions of the religion of climate change aside, Gomberg was hired by the same elite, pie-in-the-sky, experimental wish-thinking crowd that Newsom traffics in. Unlike Newsom, Gomberg is a true believer who thought his job was to bring about climate consciousness and equity. The end is saving the planet by whatever means. Water is just a superfluous tool towards that end.

Gomberg’s prior “work” was as senior analyst at the California Public Utilities Commission in the Office of Ratepayer Advocates. Think of it as a community activist group for poor communities who can’t pay their utility bills. With the price of utilities versus the actual service, I would say he didn’t do a very good job in that role.

Before that, Gomberg was a perpetual student. He has a Masters in Public Policy from UCLA and a Bachelor of Arts in Environmental Studies from the University of Chicago.

In other words, he is a theoretician who has no real-world experience outside of the classroom or the boardroom. Has Gomberg even driven through the Central Valley or been on a farm?

Doubtful. As he mentioned in his letter, Gomberg wants to destroy agriculture in the name of climate change. Newsflash: farmers make up half of California and feed the United States and the world.

A tremendous amount of time and effort is going into creating a meaningful action plan and that is worthy of praise. But, following through on those commitments means leaning into conflict. Some of you need to dig deep and find your moral compass. If you cannot do that you should step aside and let others lead.

Well, good thing Gomberg stepped aside, because, in terms of a compass, moral or otherwise, he is seriously lacking.

What Gomberg is really hella pissed about is he wanted more financial giveaways to the poor and marginalized rather than simply working to correct the problems with water storage and distribution. It is clear from his letter that what Gomberg most wanted was the power to put his grand initiatives into place. But Newsom doesn’t share power, especially when he is skating a fine line between pretending to run the state and running for president.

Like Newsom, Gomberg has no desire to actually solve the so-called water crisis either; Gomberg just wants to be able to have the power to restrict Californians and their water use in the name of climate change, rather than allow Newsom to hold all the cards.

Oh. Well. Did he really think Hair Gel and all his blather about saving the planet? I have some solid ground on the San Andreas to sell him.

After his hurricane of a tome, the fish wrap of record, The L.A. Times, felt him worthy of an interview.

In an interview with the Los Angeles Times, Gomberg said he went public with his criticisms after encountering resistance to a “long list” of proposals, including assistance for low-income ratepayers, ways of bolstering water conservation, new water agency permit requirements related to climate preparedness, and the addition of climate requirements to strengthen water regulation and management.

“We’re really, as a society at this point in time with climate change, in need of bigger, bolder action. And we’re not getting it,” Gomberg said. “Being in an agency that could be part of that, taking big and bolder actions, and being told that those options are not on the table, was intolerable.”

It’s all about the prestige of being part of this elite class, bragging rights and virtue signaling, and, oh yeah, saving the planet. The actual people who inhabit the state of California be damned. If Gomberg had his way, we would be denied and starved of water in order for the planet to shake us off like dead fleas.

Good riddance, Max Gomberg. Don’t let the doorknob hit you on the way out.

On Monday, the Michigan Association of Public School Academies and the Thomas B. Fordham Institute of Ohio filed a complaint against the Biden … END_OF_DOCUMENT_TOKEN_TO_BE_REPLACED

Apple has reportedly told suppliers based in the Republic of Taiwan to comply with Chinese customs regulations, citing fears of trade barriers … END_OF_DOCUMENT_TOKEN_TO_BE_REPLACED

While most of the allegations of corruption surrounding the FBI’s raid of Donald Trump’s estate in Florida have been pointed at the bureau itself, … END_OF_DOCUMENT_TOKEN_TO_BE_REPLACED

I’ve often talked about the animosity many in the gun community feel toward the ATF. It’s a real … END_OF_DOCUMENT_TOKEN_TO_BE_REPLACED