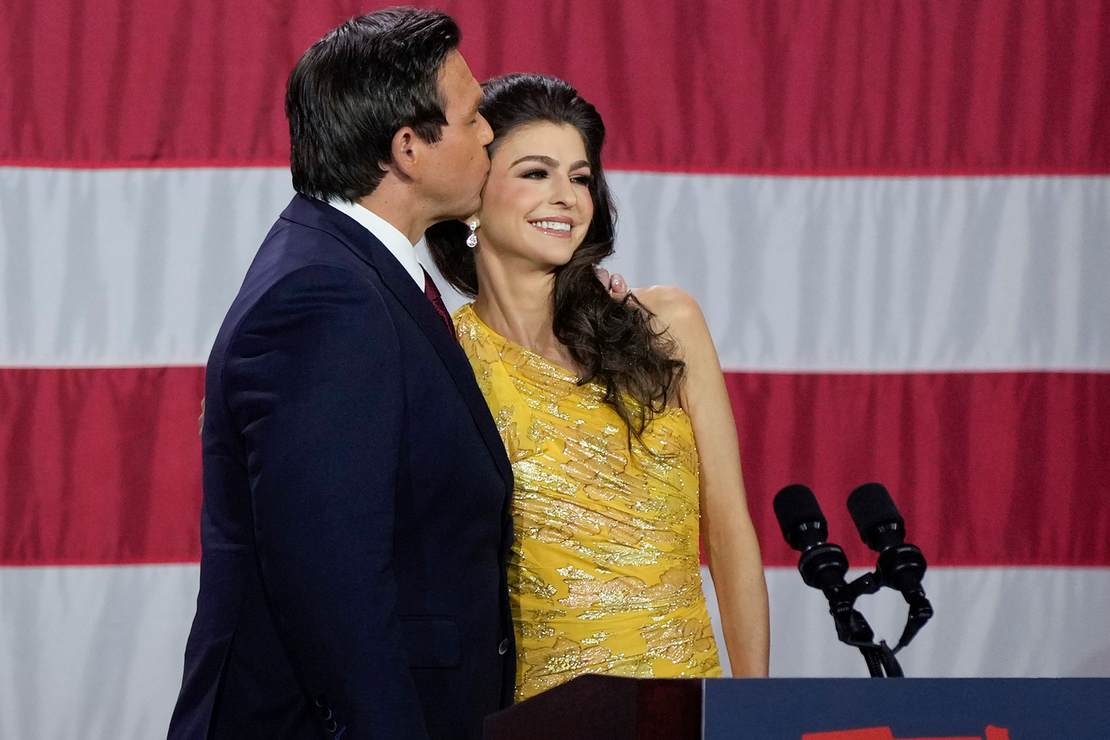 Ron DeSantis is fresh off a nearly 20-point re-election win in Florida, blowing apart expectations, and he’s not slowing down. For America’s governor, it was right back to work the day after the election, dealing with another hurricane while simultaneously leading the right’s cultural battle against the left.

I had previously coined the phrase “extreme competence” to describe DeSantis’ method of governance back in the summer, and that’s what he keeps delivering. Every giant he faces, from Disney to the teachers’ union, he slays despite the insistence of his doubters that he couldn’t possibly prevail this time. And then he does. Again and again.

That success comes with a price, though. Namely, as DeSantis’ star grows on the national stage, his family is becoming more exposed. Sure enough, the liberal media are already attacking his wife, Casey DeSantis.

After Florida Gov. Ron DeSantis’ easy victory for a second term on Tuesday, chatter about a possible 2024 presidential run as the GOP candidate hit new heights. If you’re a right-leaning media outlet like the New York Post, your next step is clear: Time to get to work humanizing this fella. This impulse is likely what brought us a Wednesday article headlined “Florida Gov. Ron DeSantis’ not-so-secret political weapon—his wife, Casey.” The article features some predictable gushing over Casey, a mother of three, former news anchor, and recent cancer survivor, who, it probably doesn’t hurt, is quite pretty, too, bearing a bit of a resemblance to television presenter Maria Menounos…

…Casey apparently stopped working in journalism during Ron’s first gubernatorial run in 2018—can’t be an enemy of the people, right? Her political aspirations for herself and her husband are reportedly grand: Earlier this year, a former colleague of hers remembered an exchange with a shared colleague in Vanity Fair: “I remember I once said, ‘Casey wants to be a senator’s wife.’ And he said, ‘No, she fully intends on being a president’s wife.’ ”

I don’t know who the author of that piece is, but man, should she probably take a Xanax. Imagine being that triggered by the fact that DeSantis has an attractive wife who does well in the spotlight. The snark drips from every word in the article, painting Casey DeSantis as an evil genius, plotting world dominance.

In reality, she’s a supportive wife and mother. Is she objectively pretty, well-spoken, and classy? Absolutely, but the rush to suggest all that adds up to naked ambition is a bit much. In fact, the only “source” in the entire article for that claim is some supposed former colleague who talked to leftwing rag Vanity Fair.

Regardless, let’s say that Casey DeSantis does want to be in the White House one day. So what? I don’t recall the press getting its panties in a bunch over Jill Biden’s obvious ambition. And to be clear, the latter’s was and is far worse given she pushed her husband into a role he’s clearly not mentally capable of filling. Michelle Obama wasn’t exactly a shrinking violet either, constantly appearing on television and taking a lead role in her husband’s administration. Of course, the ultimate example is Hillary Clinton, who basically saw herself as a co-president and then attempted to parlay that into her own presidency.

To the mainstream media, though, none of that was noteworthy. Hillary Clinton riding Bill Clinton to notoriety in order to boost her own political career was just fine, in fact. But when it comes to Casey DeSantis, she is trying to take over the country because she looks good on stage and takes pretty pictures. That makes sense, right?

This stupidity is happening for one reason and one reason only. As Ron DeSantis’ legend grows, the fear the left feels about him running for president grows as well. On Monday, a new slate of primary polls showed DeSantis leading in New Hampshire, Iowa, Georgia, Florida, and Texas. The environment has never been better for the Florida governor, and with every new piece of evidence that he could end up the 2024 nominee, the left panics just a little bit more.

They just watched DeSantis win Florida by a margin that no one thought was possible. They look at his national favorable ratings and wince. Lastly, they look at his picturesque family knowing full well how much of an advantage that will be against an invalid like Joe Biden, whose family is headlined by probable-criminal Hunter Biden.

They are terrified, and they should be.

We reported in October that musician and entrepreneur Kanye West (who now answers to “Ye”) was set to buy social media platform Parler. In the mix, as … END_OF_DOCUMENT_TOKEN_TO_BE_REPLACED

As the American people struggle through the ongoing economic scourge of roaring inflation, the White House is hosting a decadent state dinner on … END_OF_DOCUMENT_TOKEN_TO_BE_REPLACED

(As always, the opinions expressed in my posts are my own and do not necessarily represent the views … END_OF_DOCUMENT_TOKEN_TO_BE_REPLACED

Joe Biden is clueless and a hypocrite on so many different levels. He demonstrated that big time … END_OF_DOCUMENT_TOKEN_TO_BE_REPLACED