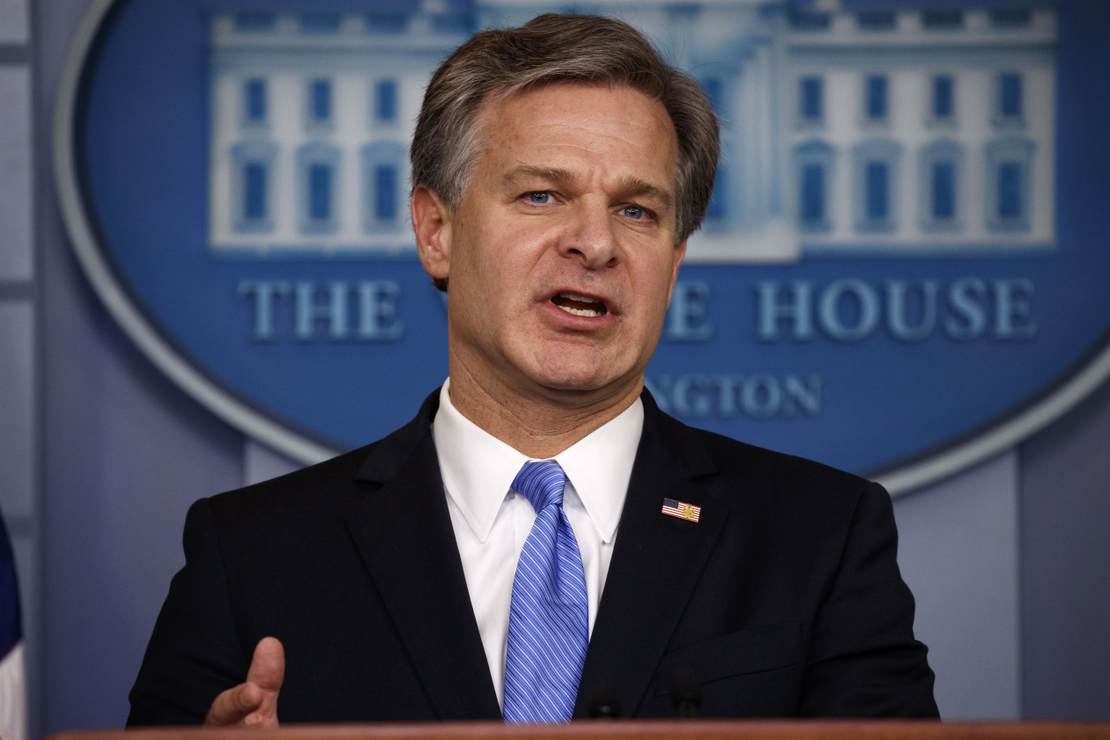 I wrote earlier in August about how FBI Director Christopher Wray said he couldn’t stay 21 more minutes to answer more questions from the Republican members on the Senate Judiciary Committee because he had a plane to catch. As I noted at the time, Sen. Chuck Grassley busted him on that by noting that Wray had his private plane, so it wasn’t like he was rushing to catch a flight anywhere and would miss it. Of course, Wray wanted to beat it out of there because the Republicans were asking great questions about the politicization of the FBI. Wray likely was trying to avoid answering anything more.

But as it turned out, not only was he taking a private plane, he wasn’t going to work, he was leaving to go to his vacation home in the Adirondacks in Saranac Lake, New York. So he truly was just blowing them off and effectively giving them the finger. The plane was intended for use in counterintelligence operations.

Here’s Wray answering “yes” to Grassley when Grassley says he assumes he has other “business” when he was going to his vacation home.

Senator Grassley: “I assume you’ve got other business?”

So, in addition to flipping them the bird, he also seems to have personally misled Grassley. I’m thinking that Grassley can’t be very happy about this and is likely to be having a word or two to say to Wray.

Now the House GOP is going after Wray as well, over his use of the taxpayer-funded plane to go to his vacation home. House GOP Conference Chair Elise Stefanik (R-NY), House Committee on Oversight and Reform ranking member James Comer (R-KY), and House Permanent Select Committee on Intelligence ranking member Mike Turner (R-OH) are demanding answers from Wray in a letter sent on Monday.

In light of a recent report by the New York Post that you left a Senate hearing early to fly on an FBI aircraft for a personal vacation, we have questions about whether you are properly reimbursing federal taxpayers for your personal travel aboard government aircraft.

According to the Post, on August 4, 2022, you abruptly departed a Senate Judiciary Committee oversight hearing to engage in personal travel to your vacation home in Saranac Lake, New York. Despite requests from Ranking Member Grassley, you refused to remain at the hearing for an additional 21 minutes for remaining members to finish asking their questions and conduct oversight of the FBI. You reportedly departed on the FBI’s Gulfstream 550 jet, an agency aircraft initially intended for counterterrorism use, to make the one hour and 12-minute journey to Saranac Lake. Further, it has been reported that you made a similar personal trip on a government aircraft on June 2 and June 5, 2022.

While the lawmakers noted that some FBI officials have used government aircraft for personal use in the past, the officials reimbursed the taxpayers at the commercial rate.

Office of Management and Budget (OMB) guidance states that a government plane is only authorized for “official purposes” and may only be authorized outside official travel when no commercial air is available or would cost more.

The lawmakers are asking to receive documents related to Wray’s government aircraft travel and an accounting of the cost to taxpayers no later than Aug. 29.

According to the GAO, Wray would be required to make reimbursement payments for personal travel to the FBI’s Finance Division, and then transfer funds to the Treasury Department.

Wray needs to answer up, not just on this but over the politicization of the FBI in general and cleaning house has to be number one on the hit parade when the GOP takes back Congress. 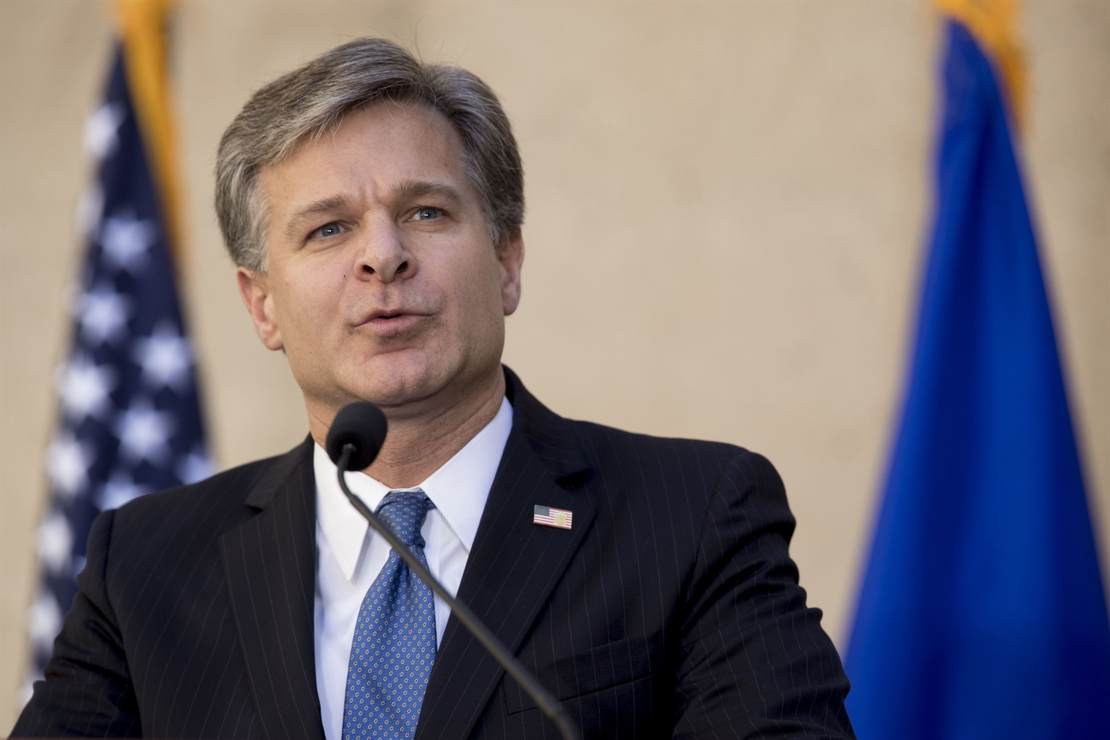 FBI Director Christopher Wray is on the hot seat Thursday before the Senate Judiciary Committee on a variety of issues. As I reported earlier, Sen. Ted Cruz (R-TX) grilled him over the politicization of the FBI, including questions about normal patriotic symbols that they were categorizing as signs of “militia violent extremism.”

That made Wray look bad enough, as though he was ignorant about the problems in his own office and/or lying about them.

Then when he was asked about Russia collusion and the Hunter Biden laptop by Sen. Marsha Blackburn (R-TN), Wray managed to make it worse.

Blackburn: “Do you agree that Russian collusion was a hoax?”

Wray: “I wouldn’t use that terminology.”

Blackburn: “Do you agree that Hunter Biden’s laptop was not Russian disino?”

Blackburn asked if Wray would agree that Russia collusion was a “hoax.” He said that he wouldn’t use the terminology. When asked if he agreed that the Hunter Biden laptop was not Russian disinformation, he said, “I can’t comment on that.” He claimed it was an “ongoing” investigation. He wouldn’t even admit they had the laptop.

The fact that the laptop is not Russian disinformation is not part of the investigation. It would be one thing if you were asking about the investigation into Hunter Biden. If you can’t even admit to certain basic truths, that shows how compromised he, and therefore the FBI, are at this point.

So, what exactly can he comment on? All he seems to know how to do is evade questions and turn the FBI into a completely politicized mess.

Then when the senators started to call him out on it, what was his response? Sorry, guys, I can’t stick around, I have to catch a plane. Yes, he seriously said that to Sen. Chuck Grassley (R-IA).

That astonished Grassley, who nailed him with a little reality, saying but you have “your own plane.”

Of course, Wray doesn’t want to stick around and give the Republicans 21 more minutes to grill him on things. This guy is something else; his smugness is infuriating. Director Wray, you work for us. And you have your own plane–that we pay for. So, it isn’t like you’re going to miss a flight if you leave 21 minutes later. The nerve of this guy.

But the problem is that this guy thinks he can get away with this because he has up to this point. Sen. Dick Durbin (D-IL) acted like it was a lot that this was the third time in a couple of years that they had Wray testifying. Given all the issues, that’s ridiculous. They need to find a way to clean house at the FBI, if they are ever going to rectify this problem; the first thing that needs to be done is put someone at the top who can help do that, and it isn’t Wray. Unfortunately, that might not happen until we take back the White House and clean house. But they have to take back the Senate and apply all the pressure they can until then–and pull out the contempt possibility if they aren’t getting answers. 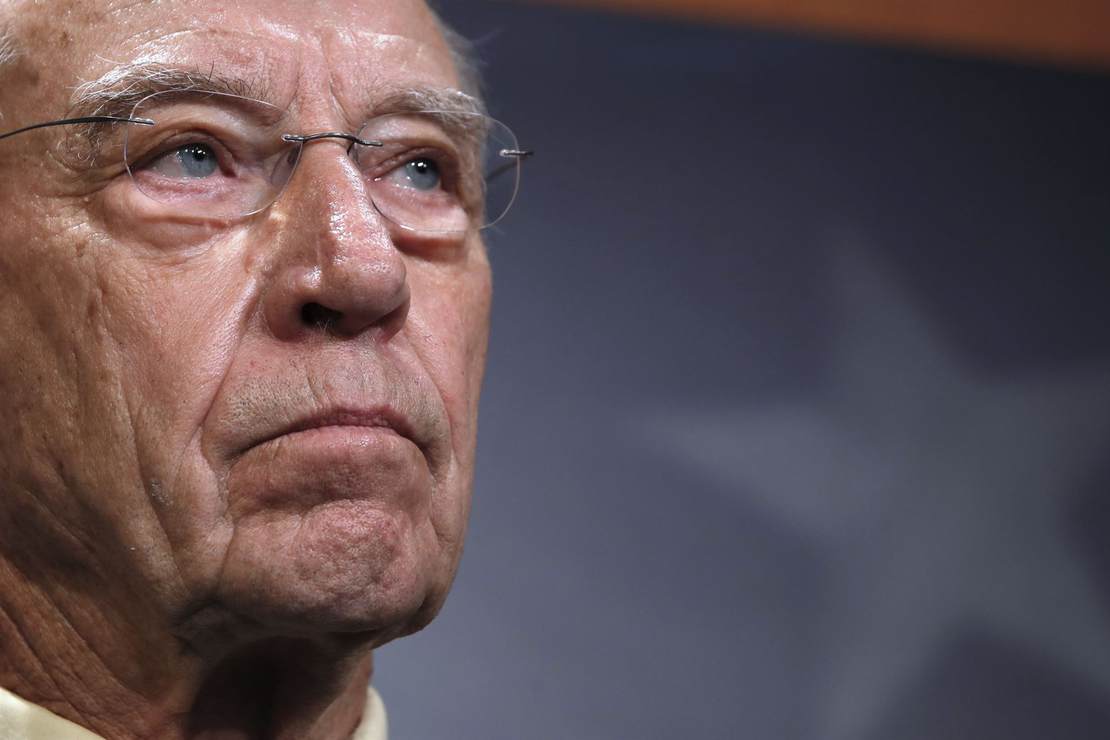 Two of Dodge's most iconic "muscle" cars will soon lose their tone. Beginning in December 2023, the Dodge Charger and Challenger will no longer … END_OF_DOCUMENT_TOKEN_TO_BE_REPLACED

At 3 a.m. on Tuesday morning, a suspect reportedly shot at an individual sitting in a parked vehicle near the intersection of Faircrest and Hayes in … END_OF_DOCUMENT_TOKEN_TO_BE_REPLACED

The FBI continues to flail after its raid on Mar-a-Lago, ostensibly under the guise of protecting government records. On Monday evening, we learned … END_OF_DOCUMENT_TOKEN_TO_BE_REPLACED

The Biden administration has decided it won’t release any of the roughly $7 billion in U.S.-based … END_OF_DOCUMENT_TOKEN_TO_BE_REPLACED

Millions of migrants continue to cross the U.S. border, and while many of them are breaking the law … END_OF_DOCUMENT_TOKEN_TO_BE_REPLACED

Police officers aren’t exactly popular in this day and age. The left hates them for being authority … END_OF_DOCUMENT_TOKEN_TO_BE_REPLACED

Joe Biden has a long history of medical issues. Some of them were life-threatening. Some less … END_OF_DOCUMENT_TOKEN_TO_BE_REPLACED