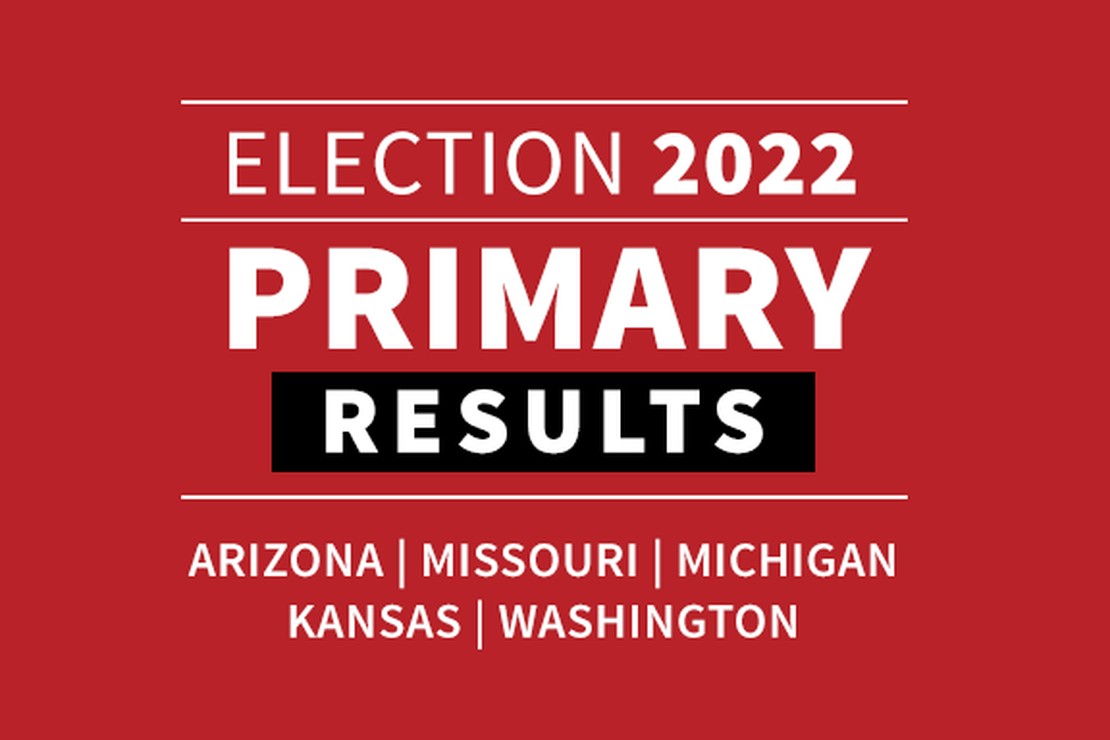 Another Tuesday, another set of primaries. This week, it’s primaries in Arizona, Kansas, Michigan, Missouri, and Washington. Here’s what to keep an eye on per DDHQ:

The overview: Voting hours are 6:00 am to 7:00 pm MS/DT. (The state holds all results until polls in DST areas are closed.) There are nine Congressional districts. Winner is first-past-the-post.

For the Governor’s race, Secretary of State Katie Hobbs is likely to be the Democratic nominee. On the GOP side, it’s a showdown between the Donald Trump-backed candidate (Kari Lake) and the Mike Pence-backed candidate (Karrin Taylor Robson). Lake is a former local TV news anchor who has vocally challenged the outcome of the 2020 election. Robson is a former GOP lobbyist, endorsed by current Governor Doug Ducey, in addition to Pence.

For the US Senate, Democrat Mark Kelly (the incumbent following the 2020 special election to fill the remainder of John McCain’s term) will face off against the GOP nominee, which could either be Mark Brnovich (current Attorney General), Jim Lamon (self-funded solar-power industry businessman), or Blake Masters (endorsed by Trump).

The overview: Voting hours are 7:00 am to 7:00 pm CDT/MDT. There are four Congressional districts. Winner is first-past-the-post

Kansas: In Kansas, the open race for attorney general includes Kris Kobach, a former secretary of state who unsuccessfully ran for governor in 2018. Trump has backed Kobach, who is a longtime ally of the former president. Also in the Republican field are candidates Tony Mattivi, a former federal prosecutor, and state Sen. Kellie Warren. Chris Mann, a former prosecutor and police officer, is unopposed on the Democratic side.

Kobach’s failed gubernatorial candidacy in 2018 meant the state got a Democratic governor with Laura Kelly. Kelly is now running for reelection in a race that’s considered a toss-up. She’s facing a primary challenge from accountant Rich Karnowski in her own party. And on the Republican side, Trump has endorsed the state’s current attorney general, Derek Schmidt, for the seat.

Aside from the candidates, one of the key things to watch about Kansas is the vote on the “Value Them Both” constitutional amendment.

“A vote for the Value Them Both Amendment would affirm there is no Kansas constitutional right to
abortion or to require the government funding of abortion, and would reserve to the people of Kansas,
through their elected state legislators, the right to pass laws to regulate abortion. A vote against the
Value Them Both Amendment would make no changes to the constitution of the state of Kansas, and
could restrict the people, through their elected state legislators, from regulating abortion by leaving in
place the recently recognized right to abortion.”-Kansas Secretary of State

The overview: Voting hours are 7:00 am to 8:00 pm EDT/CDT. There are 13 Congressional districts (Michigan having lost one following reapportionment). Winner is first-past-the-post.

In the Governor’s race, the three primary contenders for the GOP nomination, looking to face off with incumbent Democrat Gretchen Whitmer in November, are Trump-endorsed Tudor Dixon, who also has the backing of the DeVos family and traditional GOP groups in the state, real estate developer Ryan Kelley, who was arrested in connection with January 6th, and Kevin Rinke, a self-funding businessman.

A couple of the House races promise some intrigue. In the 11th District, two of the Democrats facing off (Andy Levin and Haley Stevens) are incumbents, due to redistricting. It’s a Biden +20 district. Levin is endorsed by Bernie Sanders and Elizabeth Warren. In the Third District (Biden +9), incumbent Republican Peter Meijer, who voted to impeach Trump but is backed by the GOP establishment, faces John Gibbs, who is backed by Trump. (Trump held a rally in support of Gibbs.)

The overview: Voting hours are 6:00 am to 7:00 pm (CDT). There are eight Congressional districts. Winners are first-past-the-post.

The US Senate race to fill the seat being vacated by Republican Roy Blunt has been the primary (no pun intended) focus. On the Democratic side, it’s Busch (as in beer) heiress Trudy Busch Valentine versus veteran Lucas Kunce. The winner of that contest will face the winner of the crowded GOP primary (which we’ve covered extensively here at RedState). The top three contenders for the Republicans are former Governor Eric Greitens, Congresswoman Vicky Hartzler, and current Attorney General Eric Schmitt. While he’d already ruled out endorsing Hartzler, all eyes were trained on Donald Trump, particularly after he announced Monday morning he would, indeed, be making an endorsement in the race. Late Monday, he did…sort of. In a Trumpian twist, he opted to endorse “Eric.”

“I trust the Great People of Missouri, on this one, to make up their own minds, much as they did when they gave me landslide victories in the 2016 and 2020 Elections, and I am therefore proud to announce that ERIC has my Complete and Total Endorsement!”

One House race to keep an eye on is the First District, in which incumbent Democrat Cori Bush faces a challenge from State Senator Steve Roberts. Businessman Andrew Jones is running on the Republican side and hoping to mount a meaningful challenge to the winner of the Democratic primary.

The overview: Voting hours vary by county and range to 11:00 pm PDT. There are 10 Congressional districts. The top two vote-getters advance to the General Election in November, regardless of party.

Not a lot of suspense in these. Incumbent Democrat Patty Murray will likely coast to victory in the Senate primary. Of note: Washington is essentially an all-vote-by-mail state. Mailed-in ballots need to be postmarked by Election Day, but most of the vote comes in after Election Day.

See below for live results, and stay with RedState for the latest election coverage throughout the night and into Wednesday. (Click the “Change Race” option at the upper right of each map to toggle between the races.)

U.S. Congressman Eric Swalwell, who, for the record, represents the Congressional district in which I live — thank you in advance for your sympathy — … END_OF_DOCUMENT_TOKEN_TO_BE_REPLACED

The Partisan Playbook AP Photo/J. Scott Applewhite The Senate is working overtime this weekend to … END_OF_DOCUMENT_TOKEN_TO_BE_REPLACED