Yesterday, President Trump took to Truth Social for yet another rant about the 2020 election.

So, with the revelation of MASSIVE & WIDESPREAD FRAUD & DECEPTION  in working closely with Big Tech Companies, the DNC, & the Democrat Party, do you throw the Presidential Election Results of 2020 OUT and declare the RIGHTFUL WINNER, or do you have a NEW ELECTION? A Massive Fraud of this type and magnitude allows for the termination of all rules, regulations, and articles, even those found in the Constitution. Our great “Founders” did not want, and would not condone, False & Fraudulent Elections!

Yes, this is the actual “truth” as posted by President Trump or a staffer on his behalf. It is not fake or photoshopped.

First, let’s get down to the facts. The Constitution does not permit “do-overs.” There is a process whereby the states vote via the Electoral College, and Congress certifies the result. While I’m sympathetic to President Trump’s claims and have little personal doubt that election fraud changed the vote in some states, that claim is hamstrung by the absence of forensic evidence to substantiate the claim. Even with the proof, it was over once the election was certified.

The Founders would not have wanted false or fraudulent elections, but they were also realists who knew that in late 18th century America, election fraud was a way of life. If you haven’t read a lot about the Early Republic and roving bands of voters (why do you think a specific election day made its way into the Constitution?), give this article a try. The very fact that the Founders did not make provisions for re-doing elections tainted by fraud is a strong indicator that they valued the finality of the process over lengthy wrangling over results.

But then, in my view, historical myopia is dwarfed by the nuttiness of the idea that the Constitution can be set aside. That, in turn, is reduced to nothing by giving the Democrats the ability to claim that they are the party that defends the Constitution. It gives the Biden White House the opportunity to issue this statement:

The American Constitution is a sacrosanct document that for over 200 years has guaranteed that freedom and the rule of law prevail in our great country. The Constitution brings the American people together – regardless of party – and elected leaders swear to uphold it.

It’s the ultimate monument to all of the Americans who have given their lives to defeat self-serving despots that abused their power and trampled on fundamental rights. Attacking the Constitution and all it stands for is anathema to the soul of our nation, and should be universally condemned. You cannot only love America when you win.

This is all correct, not that the Democrats actually believe in it. But President Trump’s statement has opened the door for them to claim the high ground.

First, this is the same lack of disciplined communication that marred his tenure if office. It doesn’t move the ball forward; rather, it directs attention onto President Trump for, as far as I can tell, the sole purpose of directed attention to President Trump.

Second, it is a rhetorical own-goal. You can’t, on the one hand, claim you are all about defending the Constitution if, at the same time, you are making a special pleading that your case is extra-Constitutional.

Third, it calls into question President Trump’s ability to campaign in 2024. It is one thing to say, “we were cheated, and we won’t let it happen again.” Two years after Congress certified the results, it is quite another to demand that he be QAnon-like placed into the presidency. We saw the downside of this claim in the Georgia Senate runoff in 2020 when President Trump’s harping on electoral fraud caused a lot of voters to stay home because they were convinced any outcome would be fraudulent.

When this is combined with the Kanye-West-Nick-Fuentes fiasco (Trump Owes Us More Than an Explanation on the Kanye-Fuentes Fiasco; He Needs to Show It Won’t Happen Again), one really has to question if President Trump learned anything at all from his term in the White House other than he has a loyal fanbase who will support him no matter what. Unfortunately, he seems to be blinded to the fact that many GOP voters want to win, and they want to win with a candidate who can take a flamethrower to the status quo, Top Polling Firm Survey Finds Good News for DeSantis, Not so Much for Trump — Even Among Trump Voters. What we don’t need is a coronation, particularly of a candidate who doesn’t seem able to stop stomping on his own peepee with golf cleats (Let’s Have Ourselves a Raucous, Robust Republican Presidential Primary). 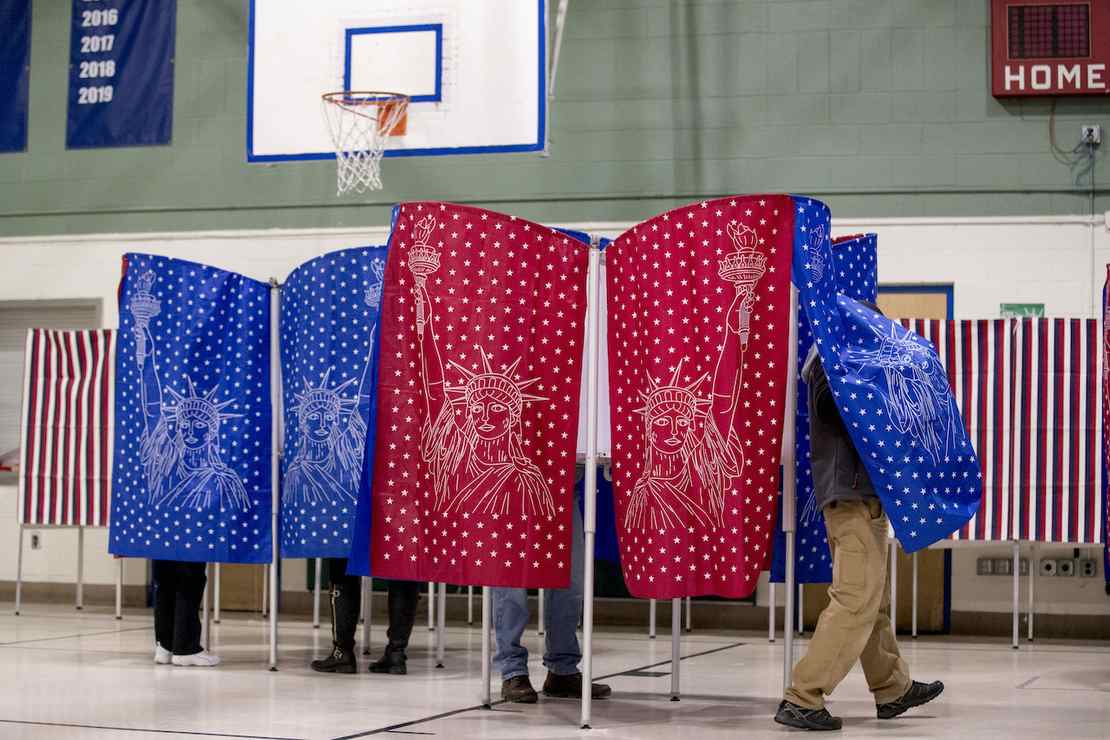 Remember how elections used to be conducted? As Election Day drew nearer and nearer, anticipation and expectations continued to grow. On that one day, all the chips were on the table, win or lose. And with few exceptions, we knew the results before we went to bed. Like it or not, those days are gone forever.

Prior to the 1980s, nearly all Americans voted at neighborhood polling stations. Today, as we know all too well, many states have eased rules restricting absentee ballots, allowing voters to cast ballots in person before Election Day, and now mail-in ballots are all the rage in the Democrat Party.

In addition, some states proactively mail ballots to voters, according to MIT’s Election Lab. Then, when the COVID “pandemic” arrived, mail-in voting skyrocketed — and the Democrats have never looked back.

In a word, Election Day has morphed into “Election Season.”

The salient question is, should the Republican Party — one faction, at least — simply continue to declare virtually every election they lose, “stolen”? Or about the growing number of mail-in ballots and the day-after-day counting of such, should Republicans heed the old axiom, “When in Rome, do as the Romans do”? I suggest the latter.

Our Managing Editor, Jennifer Van Laar, has laid out a detailed explanation of how ballot harvesting continues to evolve in California (and a preview of what the rest of the country may expect).

The Federalist Editor-in-Chief Mollie Hemingway shared her thoughts on the growing problem for Republicans during an appearance on Fox News, beginning with the results of the 2022 midterms, which saw the GOP win control of the House by a much slimmer margin than many anticipated, and the Democrats maintain control of the Senate:

You had many more Republican votes, you had a flip of the generic ballot by seven points, and yet where it mattered, on the key targeted races, the Democrat ballot operation really overperformed. Well, that really helped Biden, but it makes it more difficult to move on from President Biden.

So what went wrong for Republicans in the midterms, as Hemingway saw it?

When you have a failure like Republicans had, it has a lot of fathers. You see a lot of finger-pointing, and all of it is probably valid. But I do think the one, overarching thing that Republicans need to understand is that they’re running elections on an Election Day model that no longer exists.

Democrats have worked very hard for decades to move to an ‘election season’ where they can harvest ballots every day of that election season so that by Election Day, they have already won. Whereas Republicans keep focusing on getting people excited for Election Day.

That is not going to work in places where there’s massive unsupervised balloting and ballot trafficking operations, so they either need to do a much better job of fighting those things, or they need to join and actually play according to the new rules of the game.

Bingo. Republicans must join the Democrats and “actually play according to the new rules” — and win.

Seeking legitimate election reform is one thing — and critically necessary — but automatically blaming lost elections on voter fraud or systemic election fraud is another. Moreover, doing the latter doesn’t afford election losers much “mirror gazing.” In a nutshell, dismissing elections as ‘stolen,” might feel better than accepting a loss, but on the contrary, it does only harm to losing candidates and their respective parties.

Fox News Ingraham Angle host Laura Ingraham said much of the same during a post-midterms recap:

Now, who knows how things are going to shake out but as much as the grassroots wants to turn the entire party upside down, and I do not blame them one bit [but] they need to be realistic about the landscape. You can’t beat something with nothing.

Whoever is in charge will have to lay out the groundwork now, for a far more sophisticated campaign in 2024. If you want to lead the Republican Party you need to be able to answer tough questions.

First, we can complain about it, and we do, even in some Republican states, ballot harvesting is legal in certain circumstances. In fact, it’s legal in dozens of states. Ballot harvesting is basically when a third party, often political ops, can collect and bring in ballots for a voter. So, why the heck aren’t the Republicans better at it?

Great question. And then this, as I suggested in my headline:

What are the most successful groups doing it now? How much does it cost? What are Republicans doing to emulate the successful methods? […]

Second, as much as we all wish voting was limited to one day, and I would mandate that tomorrow if I were queen, early voting is probably here to stay. So, what’s leadership proposing that their state officials do to get better at this?

You got to hand it to them, the Democrats know how to game the system. But, until Republicans can change election laws, they need to beat the Democrats at their own game.

The sight of grown men actively beclowning themselves is rarely a pleasant sight. However, there is … END_OF_DOCUMENT_TOKEN_TO_BE_REPLACED

Christopher Keeley, a man who stands accused of brutally murdering a 70-year-old couple from … END_OF_DOCUMENT_TOKEN_TO_BE_REPLACED

The state of Hawaii has a history of restricting guns. This is even worse in the city of Honolulu, … END_OF_DOCUMENT_TOKEN_TO_BE_REPLACED

In between being bogged down in a pointless war in Ukraine and presiding over domestic turmoil, … END_OF_DOCUMENT_TOKEN_TO_BE_REPLACED