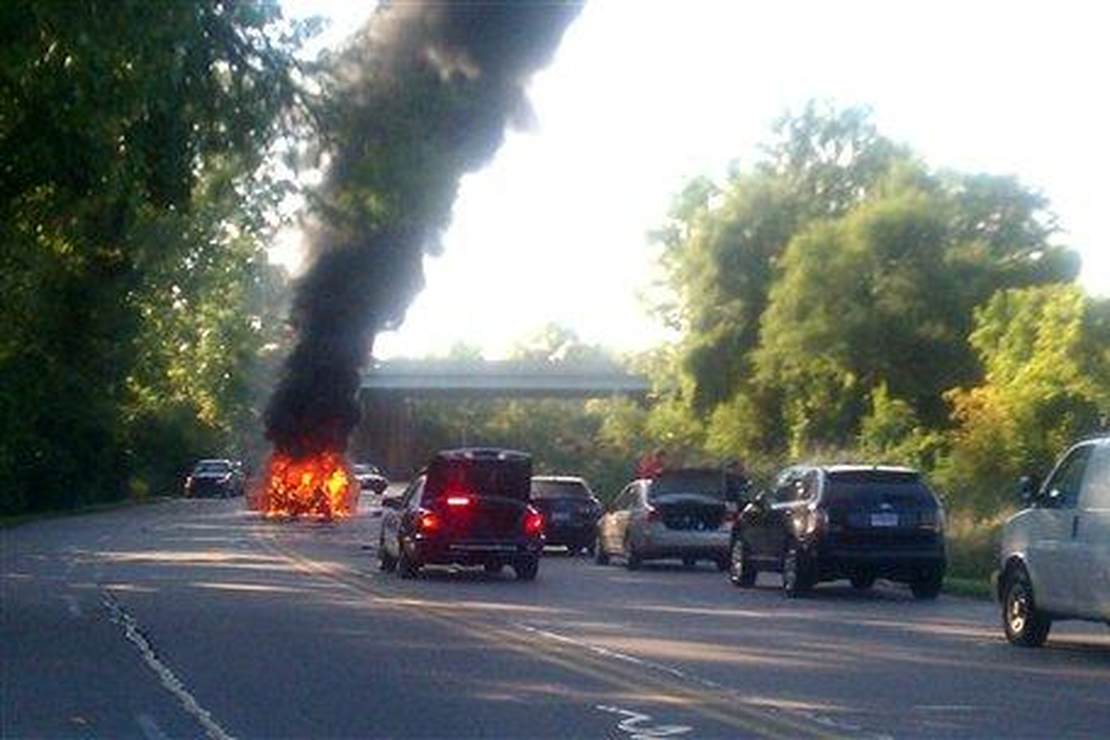 The world isn’t as it once was. That’s always been true, but we seem to have been on a downhill slope for a bit.

Yet, good remains among us. And despite the stunning narcissism devouring society, some people are willing to risk their lives to save others.

For proof that heroes still exist, look no further than an incident earlier this month on a Canadian freeway.

Around 10 a.m. just west of Toronto, a 36-year-old driver suffered a seizure. His car having crashed, it was billowing smoke on the roadside. The commuter, evidently, had been rendered unconscious.

Commercial real estate broker Ben Sykes was traveling on Mississauga’s Queen Elizabeth Way and spotted the automobile near the offramp. One concerned citizen was already on the scene.

“I saw somebody with a car jack in their hand heading towards the vehicle quickly and then [starting] to hit the window. And so, I guess, at that minute, I sort of felt like, ‘Well, [I’ve] got to help here.’ And so I jumped out of the car and, you know, just did what I could…”

Multiple men surrounded the locked car, trying to bash the glass and wake the driver.

A dashcam caught it all. Video shows the men screaming, “Get out of the car!”

One man uses his fists on the driver-side window. Eventually, someone uses a stone.

Amid the frenzy, Ben says, another do-gooder delivered a tool:

“[T]hankfully, there was a guy in a dump truck. Whoever that was, he threw a hammer out the window and I realized, ‘Okay, [we’ve] gotta grab this thing.’

“And so I grabbed the hammer and smashed that window, and we were able to get it open. And (I’m) just thankful that the timing worked out the way it did. It was literally the nick of time.”

Ben reckons the rescue occurred half a minute before the vehicle was engulfed in flames.

The OPP Highway Safety Division has posted footage with a caption hailing the heroes.

Ben and crew liberated the driver on Independence Day:

A 36-year-old man from Toronto who experienced a medical episode is alive because of the heroic efforts of five men who risked their lives as the vehicle began to burn with the driver still inside. They got the driver’s door open to save the driver. You are my #HERO. July 4, ’22

A 36 year old man from Toronto who experienced a medical episode is alive because of the heroic efforts of five men who risked their lives as the vehicle began to burn with the driver still inside. They got the drivers door open to save the driver. You are my #HERO. July 4, ’22 pic.twitter.com/bwE43tMhn1

Per police, the victim incurred no injuries. Ben has since spoken to him:

“He obviously is thankful. I’m sure it’s all settling in for him. It’s emotional. It’s been an emotional roller coaster for me this week. I’m sure it’s been the same thing for him. So, thankfully he’s in good shape, and we all walked away.”

Ben explains it was “fight or flight.” Furthermore, he’s not so special:

“I think there’s a lot of people out there that would do the same thing if they got into that situation. And all we can do is try and help other people, and the world’s a good place despite all the stuff that’s going on right now.”

In dark times, there are indeed glimmers of hope. Just weeks ago, a 22-year-old visiting an Indiana Mall with his girlfriend spotted a mass shooter about to begin his spree. Elisjsha Dicken engaged the criminal while yelling for others to fall back behind him.

As for flaming vehicles, we’ve observed other incidents where strangers have risked being burned.

A year earlier, a Marine rescued a baby from an automotive inferno near Camp Pendleton:

Back to Canada’s roadside rescuers, Mississauga Fire Captain Chris Ogg tells Global News, “A vehicle fire is probably close to 1,000 degrees. They got to him just in time. … Tremendous act of heroism. I’ve never seen anything like it in my 28 years as a firefighter.”

For their bravery, Ben and the others have been recommended for the Fire Chief Commendation Award.

Heroes of Our Past: Expedition Locates Long-Lost WWII Ship Sunk by the Imperial Japanese Navy

Christmas Miracle: Dad Murders Baby, But There was ‘Someone Watching Over’ Her

Firefighters do important work. I don’t think anyone will dispute that in any way, shape, or form. While some think we can defund the police, no one talk about defunding firefighters.

And most firefighters in this country aren’t even paid. They’re volunteers, people who put themselves in harm’s way to help their community.

A volunteer firefighter for the Cotter Fire Department has been arrested after he admits he took two guns from a house while fighting a fire last month. Nineteen-year-old William Hartwell Cooke allegedly put the guns in his turnouts while helping extinguish the blaze and then tried to sell them at a gun shop a couple of weeks later. Cooke is also charged for cash that went missing during the fire.

Last Friday, Cooke allegedly tried to sell the guns at a gun shop in Gassville. The staff believed the guns were stolen and called law enforcement. During questioning, Cooke admitted he took the guns during the fire, putting them in his turnouts and walking them to the fire truck. Law enforcement obtained surveillance video from the Cotter fire house showing Cooke unloading the guns from the fire truck.

The thing is, when your house is on fire, you’re not going to take the time to secure your possessions before calling the fire department. The communities trust these departments to do the right thing and focus on the task at hand.

And, to be clear, the vast majority of firefighters–volunteer or other–do precisely that.

Yet it only takes a few people like this to paint one of the noblest callings in which one can engage in a negative light.

Cooke is looking at doing a long time in prison for what he did, as he should. The theft of firearms is bad enough, but to take advantage of people at what was likely a very low and traumatic point like this is particularly despicable.

As he’s admitted to the theft, the only real point of contention now is just how long he’ll rot in prison for what he did.

When he gets out, he can give up fighting fires anymore. I doubt anyone will trust him with a garden hose at this point.

Granted, at this moment, that’s probably the least of Cooke’s worries.

So how can you prevent this kind of thing? Well, obviously, keeping your guns secured in a fire-proof gun safe is the best option. Not only will they be protected from fire but also unscrupulous firefighters. As these were long guns Cooke stole, they’re unlikely to have been needed for home defense, though I freely admit I could be wrong on that one. Still, securing your firearms is just smart.

As for preventing people like Cooke from becoming volunteer firefighters, well, that’s another matter entirely and I don’t know that there were any indications he couldn’t be trusted.

Luckily, the weapons were recovered and Cooke will get to rethink his life choices, as he should.

On Monday evening, the FBI took the unprecedented step of raiding the home of former President Donald Trump. What were they looking for? … END_OF_DOCUMENT_TOKEN_TO_BE_REPLACED

Nebraska Gov. Pete Ricketts, a Republican, issued a statement on Monday announcing that due to a … END_OF_DOCUMENT_TOKEN_TO_BE_REPLACED