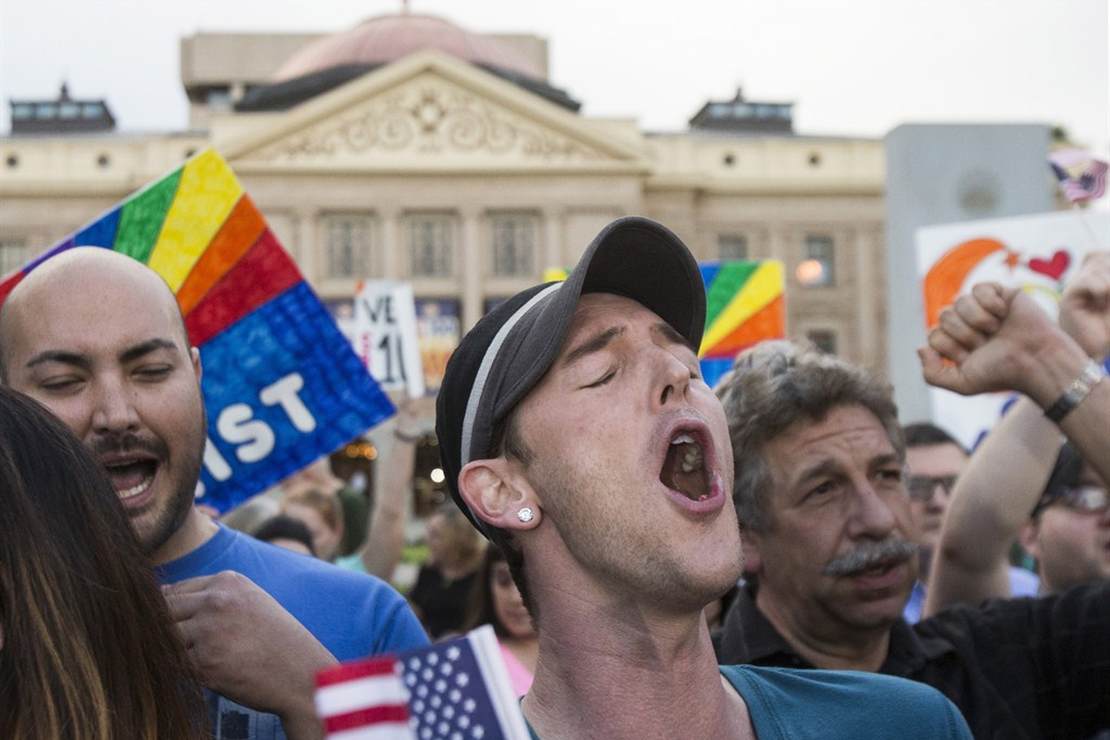 Anyone familiar with the very essence of the far-left knows they are tantamount to petulant children: the more they get, the more they want. They are never satisfied. Like spoiled brats, leftists whine their asses off until “mommy” — rational America — caves in and gives them “a little bit more,” hoping against hope to finally give them enough to shut them up. Except they will never shut up; nothing will ever be enough.

One of the left’s most potent tools through the years has been “legislating from the bench,” by which leftist judges force leftist policies and ideology on America because of the left’s inability to garner sufficient support to pass their radical agendas through state or federal government legislatures.

This story is one such example.

As reported by The Blaze on Friday, the Michigan Supreme Court has declared that a state law prohibiting sex-based discrimination also bans discrimination on the basis of sexual orientation. The 5-2 decision struck a significant blow to Michiganders opposed to the LGBTQ agenda — and here’s the critical part — including based on religious beliefs.

The case involved Rouch World, LLC, which had declined to host a same-sex wedding, and Uprooted Electrolysis, LLC, which — wait for it — refused to provide hair-removal services to a transgender woman.

In both cases, the owners said providing the requested services would have violated their religious beliefs.

Five of the seven Michigan Supreme Court justices disagreed. Let me fix that: didn’t give a damn. The majority decision reads, in part, as transcribed by The Blaze:

The decision noted that the owners of Rouch World “explained that hosting and participating in a same-sex wedding ceremony would violate their sincerely held religious belief that marriage is a sacred act of worship between one man and one woman.”

In the case of Uprooted Electrolysis, the owner viewed the requested services as centrally connected to Wolfe’s transgender identity and asserted that delivering these services would violate her sincerely held religious belief that sex is an immutable gift from God.”

Again five of the seven justices either disagreed or didn’t give a damn about the religious beliefs of these two faith-based people.

Incidentally, you might recall the never-ending saga of Jack Phillips, the owner of Masterpiece Cakeshop in Colorado, who — due to his religious beliefs — refused to bake and design a wedding cake to celebrate a gay marriage. Or perhaps the case in which the owners of an Indiana pizza shop refused to cater a gay wedding reception, saying they supported the Religious Freedom Restoration Act signed into law in 2015 by then-Governor Mike Pence.

That was then, this is now.

This is a quintessential example of radical leftism in action. When the Supreme Court in 2015 made same-sex marriage the law of the land, it wasn’t “good enough” for the left. Next on their agenda? Rush to Christian churches and demand to be married — faith-based opposition be damned — simply because gays could finally be legally married.

Next came faith-based cake shops, pizza shops, and others. Were the shops I referenced above chosen (targeted) based simply on the quality of their products? Hell no; they were targeted for the purpose of forcing Christians to violate their religious beliefs.

Incidentally, did you ever wonder why, after the SCOTUS ruling, gay couples didn’t rush to Muslim mosques and demand to be married, and attempt to force Muslim bakers to cater their wedding receptions? Me, neither.

Anyway, today we live in Biden’s America, where third-graders are taught that “boys can have periods, too,” men menstruate and nobody on the left who isn’t a biologist seems to be able to define “woman” — until the nanosecond after the U.S. Supreme Court rightfully returned to the states the right to make respective decisions on abortion.

None of this is going to end well, is it?

The White House announced that, finally, Joe has beaten back COVID. Again. I think this was his 12th rebound from being COVID negative. For the media … END_OF_DOCUMENT_TOKEN_TO_BE_REPLACED

The Partisan Playbook AP Photo/J. Scott Applewhite The Senate is working overtime this weekend to pass the $433 billion spending bill known as the … END_OF_DOCUMENT_TOKEN_TO_BE_REPLACED

Shower rooms have changed a bit. So have Christian associations. In Port Townsend, Washington … END_OF_DOCUMENT_TOKEN_TO_BE_REPLACED

Unbelievable? Nope. Not in the least. A Jewish group at the liberal City University of New York … END_OF_DOCUMENT_TOKEN_TO_BE_REPLACED

Former Hawaii Democrat congresswoman Tulsi Gabbard, who, in one of the greatest presidential debate … END_OF_DOCUMENT_TOKEN_TO_BE_REPLACED

John Harwood, the Democratic representative from CNN, is attacking Marco Rubio for calling the … END_OF_DOCUMENT_TOKEN_TO_BE_REPLACED