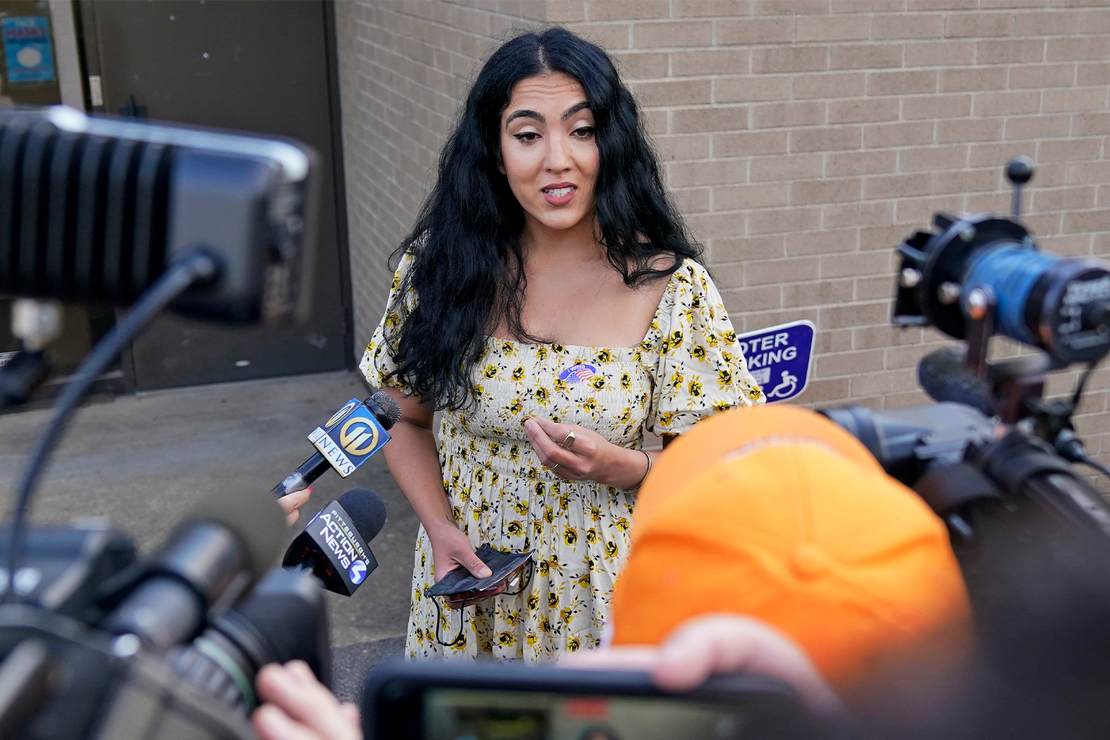 Because then-Pennsylvania Democratic Senate nominee John Fetterman did not look well on the campaign trail after suffering a stroke in May shortly before the primary, his wife Gisele often spoke on his behalf, whether it was to introduce him at an event or answer questions during interviews and other public speaking engagements where she appeared to relish taking the lead.

Her penchant for doing so sparked questions and concerns at the time from John Fetterman’s critics and even some in the mainstream press, all of who wondered just who was running the show during the campaign and, more concerningly if Pennsylvanians could expect more of the same in the event Fetterman was elected.

Notice anything off in that photo? Yeah, she appears more prominently in the photo than he does – and he’s also partially cropped out of the picture, as though he was an afterthought.

Some helped her out by fine-tuning the cropping to better meet her standards:

Apparently, posting pictures where parts of her husband are lopped off doesn’t appear to be a new thing for Mrs. Fetterman, as others observed:

And instead of alerting constituents as to how her husband was handling his first day getting acquainted with how things worked in the U.S. Senate, we got a fashion update from the Mrs.

“Also me a few hours into Senate spouse orientation … when someone said: I love your dress … ‘thanks, it’s thrifted! $12!’” she tweeted later because that’s what everyone really wanted to know.

Not to be outdone, a John Fetterman adviser provided an update on what he would be wearing to work each day after a Huffington Post reporter asked Fetterman this critically important question as he walked past him: Will he ever attempt to wear his hoodie on the Senate floor?

“1) John Fetterman has a suit and will wear it to the Capitol. 2) He is still recovering from a stroke and has lingering auditory processing challenges. The way Hill reporters are used to yelling questions at Senators will not work here,” New Deal Strategies founder Rebecca Katz responded.

As to who will be in charge of things once John Fetterman officially takes office in January, it remains to be seen as to if that question will ever be answered, whether it be yelled at them or asked calmly in a way that won’t have Gisele Fetterman demanding an apology from whoever is brave enough to ask it.

To Pennsylvanians who supported John Fetterman’s bid for Senate, remember this when things get even weirder later: These are the people you voted for.

It has long been speculated that Gavin Newsom, an ultra-progressive politician who survived a recall effort in his state after dissatisfaction with … END_OF_DOCUMENT_TOKEN_TO_BE_REPLACED

Did you know that freedom of speech is “nonsense?” That’s the word from CNN, which let a former CIA … END_OF_DOCUMENT_TOKEN_TO_BE_REPLACED

The Chinese media has, in recent years, opined plenty about the right to keep and bear arms. Well, … END_OF_DOCUMENT_TOKEN_TO_BE_REPLACED

With Democrats in complete control of Colorado government, any legislative response to the mass … END_OF_DOCUMENT_TOKEN_TO_BE_REPLACED