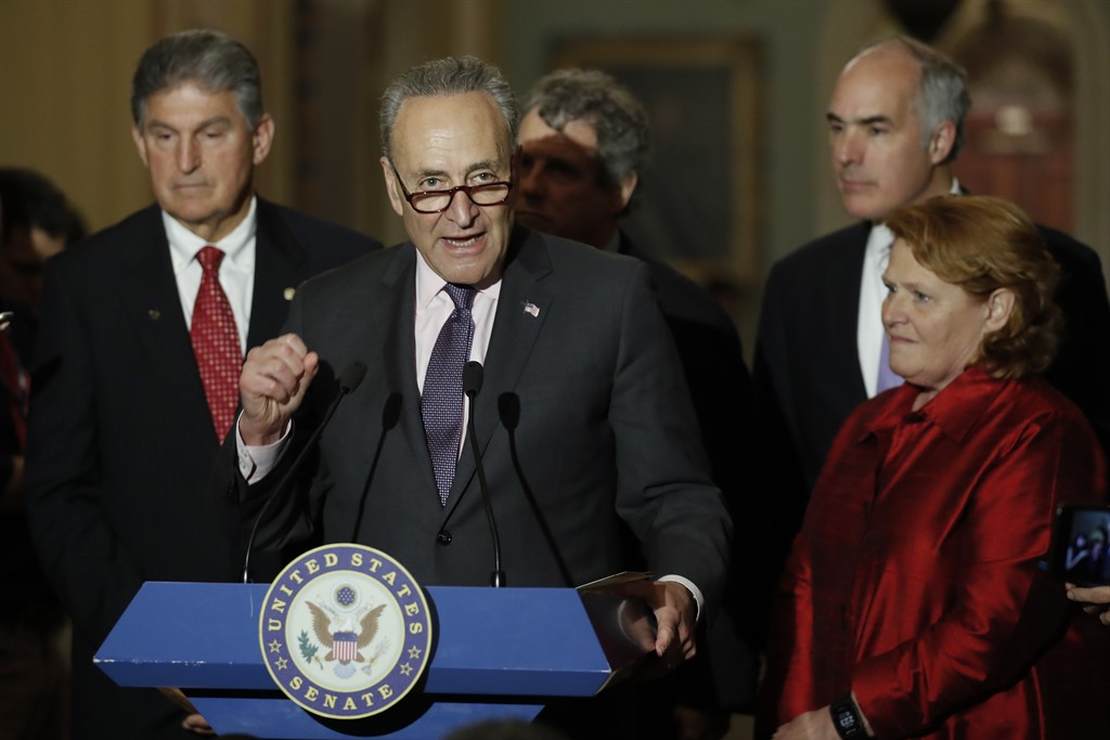 When I wrote about the agreement West Virginia Senator Joe Manchin made with Senate Majority Leader Chuck Schumer on July 27 regarding the Inflation Reduction Act, I predicted that the actual details of the bill wouldn’t be known immediately and would trickle out over time. As Nancy Pelosi once famously said, “We have to pass the bill so that you can find out what is in it — away from the fog of the controversy.” Although she wasn’t talking about the Inflation Reduction Act in that instance, the same principle would apply.

It’s only years later that you find out $100 million was earmarked for the Barney Frank Underwater Basketweaving Society.

As more details of the Schumer-Manchin pact come out, it becomes even harder to discern just what the heck Manchin, who’s mostly funded by out-of-state voters and only won his last election by three percentage points, was thinking. He’s talked tough on inflation, ruled out abolishing the filibuster, and has oftentimes sounded like he’s considering moving to the Republican Party. Not so with this bloated behemoth of a bill.

…a closer look at a fresh analysis of the bill from the Congressional Budget Office shows that over 90 percent of the promised deficit reduction in the bill would come after 2026 — meaning it would do absolutely nothing to help reduce the current inflation problem. (Emphasis mine.)

The National Review blasts the bill even further:

Of the $305 billion in promised deficit savings over the next decade, CBO says just $21 billion will be coming over the next five years, when we’re in the midst of a historic inflation crisis, while the remaining 93 percent of the claimed savings won’t come until after 2026. Whatever else may be said about the bill, the idea that it will help address the current inflation problem is absurd.

The bill basically consists of hundreds of billions of dollars in green-energy handouts and an Obamacare expansion, which is supposedly going to be offset by tax hikes and increased IRS enforcement. Because we need more of the IRS in our lives.

Joe Biden promised he wouldn’t raise taxes on anyone making less than $400k a year. He 100% lied. It’s shameful you signed on to this @Sen_JoeManchin. Your political career in West Virginia is over as soon as you vote yes on this. pic.twitter.com/ZYh9LcfYcc

Turns out Manchin is not the moderate he so often portrays himself to be. According to Fox News, he toes the Democrat line far more regularly than you might think:

Manchin, D-W.Va., voted with Sen. Bernie Sanders, I-Vt., 88% of the time this Congress, and Sen. Elizabeth Warren, D-Mass., 91% of the time, according to a ProPublica database. Significantly, he also agreed with Senate Majority Leader Chuck Schumer, D-N.Y., on 91% of votes, according to ProPublica.

The Wall Street Journal Editorial Board is not a fan of the bill, writing that it’s just a big payoff to unions and special interests:

The 725-page bill is riddled with green goodies that favor unions and projects located in specific regions. Most tax credits for renewable energy projects are five times more generous if contractors pay “prevailing wages”—that is, union-scale wages—and employ workers participating in apprenticeship programs. These are usually run by unions.

It’s hard to understand what Manchin was thinking on this one. Perhaps he wants to be fêted by the Washington Post and the New York Times and get invited to Georgetown cocktail parties.

I used to be a fan, as he stood strong against abolishing the filibuster and talked a good game on inflation. Now he’s seemingly turned his back on his principles, and the American people, and we can only hope Arizona Senator Krysten Sinema is a no-vote on this unfortunate bill.

Arizona recently started building its own wall to fill the gaps along the Yuma sector of the southern border, and it is a truly innovative solution to … END_OF_DOCUMENT_TOKEN_TO_BE_REPLACED

The Left and their lapdog media are STILL busy looking for anyone and anything to blame for January 6. Their goal is to make "extremists" out of half … END_OF_DOCUMENT_TOKEN_TO_BE_REPLACED

In the first poll since the unprecedented Mar-a-Lago raid, Emerson College Polling showed that J.D. Vance, the Trump-backed Republican nominee for … END_OF_DOCUMENT_TOKEN_TO_BE_REPLACED

A group of Republican senators is pushing a bill that would prohibit U.S. Immigration and Customs … END_OF_DOCUMENT_TOKEN_TO_BE_REPLACED

In the classic 1979 comedy, The Jerk, Navin Johnson (comedian Steve Martin) excitedly chats with his … END_OF_DOCUMENT_TOKEN_TO_BE_REPLACED

Evil teachers' unions represent one of the most powerful forces in America. It is no secret that … END_OF_DOCUMENT_TOKEN_TO_BE_REPLACED

Stolen guns represent a very real problem, one many communities are trying to figure out how to deal … END_OF_DOCUMENT_TOKEN_TO_BE_REPLACED

On July 29th, a CASA C-212-200 airplane made a rough emergency landing at Raleigh-Durham … END_OF_DOCUMENT_TOKEN_TO_BE_REPLACED

Most of the defensive gun uses that we feature here at Bearing Arms have a happy ending, but … END_OF_DOCUMENT_TOKEN_TO_BE_REPLACED

Rep. Jim Jordan (R-OH), the top Republican on the House Judiciary Committee, has been fielding … END_OF_DOCUMENT_TOKEN_TO_BE_REPLACED