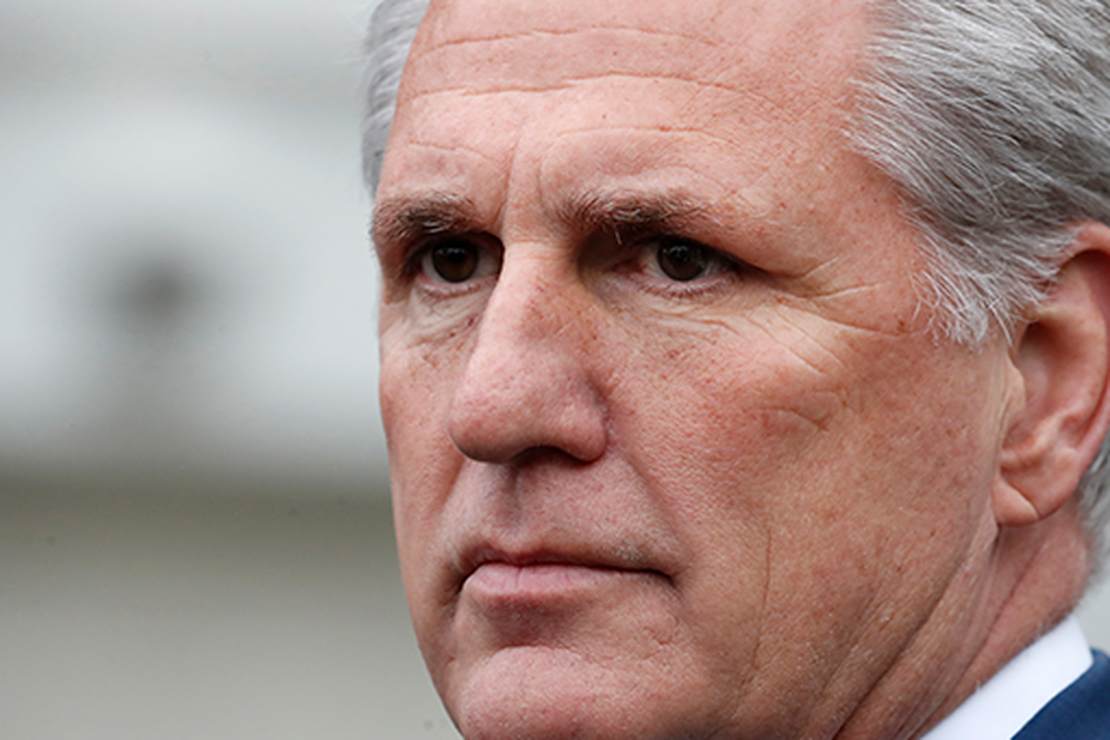 As Republicans make plans for taking control of the House of Representatives in January, members of the conservative House Freedom Caucus are warning that Kevin McCarthy (R-CA), who won the GOP’s nomination for Speaker of the House last week, may not actually have enough votes to earn him the Speaker’s gavel.

Just because he won the Republican nomination doesn’t mean Kevin McCarthy automatically becomes Speaker; he essentially needs the backing of every GOP House member when the entire chamber votes early next year. Here are the numbers:

Freedom Caucus member Andy Biggs (R-AZ) has been one of the most vocal opponents of McCarthy’s ascending to the speakership. He appeared on Dana Loesch’s radio show today and confirmed that McCarthy is short of the votes he needs, tweeting:

Biggs, himself, confirmed to Dana that he is still in the running to become Speaker, having been nominated by fellow Freedom Caucus member Rep. Chip Roy (R-TX) last week in a speech ahead of the GOP speaker vote:

Roy’s comments are in line with Biggs’ own complaints about House Republicans, led by McCarthy as Minority Leader, failing to take aggressive action on an agenda that excites American voters. As RedState reported last week, Biggs stated:

“… I think Americans want us to actually bring the budget under control, they wanted to secure the border, they want us to just find a way to reduce oil and gas prices, attack inflation, all of that. And you can’t do that by being a passive sideliner or sitting there acquiescing to the Biden administration or trying to get along, you’re going to have to be tough.”

According to The Hill, a “Never Kevin” faction is growing in the GOP ranks, with Rep. Warren Davidson (R-OH) saying, “The hard thing for Kevin, realistically, is there are a fair number of people who have said very publicly they’re ‘Never Kevin.’ Like, there’s nothing that Kevin can do to get their vote.” This should be very concerning for Kevin McCarthy.

If neither party has the votes to elect a speaker of the House, I’d be happy to serve as a nonpartisan speaker who ensures the institution works as it’s supposed to—a place where all ideas are welcome and where outcomes are discovered through the process, not dictated from above.

Kevin McCarthy, who is backed by former president Donald Trump and the recently reelected Rep. Marjorie Taylor Greene (R-GA), isn’t likely to create an opening for someone like Amash to be a spoiler. After winning the nomination last week, McCarthy said, “Look, we have our work cut out for us. We’ve got to have a small majority. We’ve got to listen to everybody in our conference.”

In an effort to shore up support in his conference, McCarthy seems to be setting his sights on issues important to the more conservative members of his party. He is vowing, for instance, to “move meetings” to the border “so the Democrats can no longer ignore the problem, so the American public can actually have the information.” A move that certainly seems to align with the Freedom Caucus agenda. And there are sure to be more as he works toward that critical 218 number.

We’ll find out on January 3 if his efforts are successful.

If Kroger and Albertsons thought Republicans would rescue their plan to merge, Sen. Tom Cotton (R-Ark.) made it clear last Tuesday that support for … END_OF_DOCUMENT_TOKEN_TO_BE_REPLACED

The mother of a 10-year-old boy was arrested in Highland, New York, for allowing her son to get a permanent tattoo on his forearm.Crystal Thomas was … END_OF_DOCUMENT_TOKEN_TO_BE_REPLACED

There are a lot of reasons to go over why the GOP underperformed in 2022, and after last night’s loss in Georgia and the election cycle being over, we … END_OF_DOCUMENT_TOKEN_TO_BE_REPLACED

There are a lot of reasons to go over why the GOP underperformed in 2022, and after last night’s loss in Georgia and the election cycle being over, we … END_OF_DOCUMENT_TOKEN_TO_BE_REPLACED

While it is well understood that the vast majority of gun owners never commit a crime, let a lone … END_OF_DOCUMENT_TOKEN_TO_BE_REPLACED