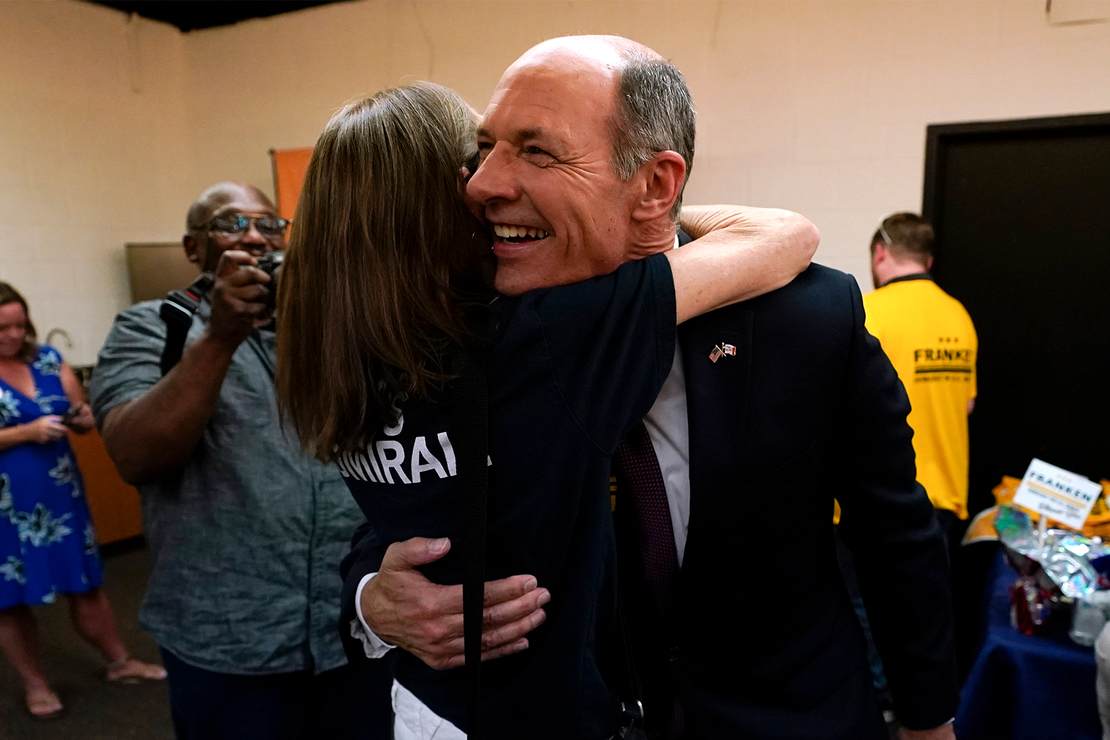 Long-serving Iowa Republican senator Chuck Grassley was already comfortably ahead in the polls for his Senate re-election campaign, but now it’s revealed that his Democrat opponent Mike Franken is facing serious sexual assault/harassment allegations from his former campaign manager.

The Iowa Field Report reported Monday that the former campaign manager, Kimberley Strope-Boggus, accused Franken of unwanted advances, grabbing her, and kissing her on the mouth without consent after drinks at a bar in Des Moines, Iowa last March. The publication obtained a police report dated April 12, 2022, which described how Franken “grabbed the collar of the vest she was wearing and kissed her on her mouth” before she could “pull away.” She went on to portray the candidate as having a “1950s” style of acting with female subordinates.

Grassley has been a senator since 1981; Mike Franken is a retired United States Navy vice admiral who ran for Senate in 2020, eventually losing in a primary.

Strope-Boggus’s wife, Becky, tweeted several times about the incident, but those tweets (and the campaign manager’s retweets) are no longer available. Becky Strope’s Twitter account is now private. After Becky’s wife’s tweets were posted, Franken’s lawyers attempted to silence Kimberley, according to the Field Report:

After those tweets were posted and then reposted by Ms. Strope-Boggus, Franken’s lawyers allegedly contacted Ms. Strope-Boggus’ lawyers and attempted to silence her. “[Mike Franken’s] team advised her lawyer that that was a violation of the nondisclosure that she signed when she was terminated,” the [police] report stated.

There are always three sides to a story, though: your side, my side, and the truth. The Des Moines Register responded Monday with an article of their own attempting to shoot down the allegations:

The case was closed as “unfounded,” and no charges were filed.

The report, filed in April by former staffer Kimberley Strope-Boggus, describes the alleged offense as misdemeanor assault. It was first reported Monday by the conservative website Iowa Field Report.

In the report, investigating Officer Abby Giampolo writes that after discussing the case with Assistant Polk County Attorney Meggan Guns, “it was determined that there was insufficient information and evidence to pursue a criminal investigation.”

“It didn’t happen,” Franken, 64, told the Des Moines Register after an event in Cedar Rapids Monday. He said he was not interviewed by police, who he said investigated and found the allegation “baseless.”

The former staffer “did not describe any sexual intent (by Franken) nor any intent to harm either her or the other women,” the police report said. https://t.co/SU366mZGNR

The Register further goes on to say that Strope-Boggus “did not describe any sexual intent (by Franken) nor any intent to harm either her or the other women,” and that Franken had “stopped the contact and walked away without saying anything further” after the encounter.

#MeToo cases are hard to report on and hard to listen to because frankly, we have no idea what actually occurred other than the stories of the only two people who were there. While this story at first glance appears eye-opening, the actual details don’t seem that sinister. Man tries to kiss a woman (who was not his subordinate at the time), but walks away when his advances are rejected. In my view, that hardly rises to the level of sexual assault. However, his attempts to silence the accuser and the allegations that he “grabbed the collar” of her vest are concerning.

This certainly isn’t a good look for Franken, who is married with two children, and it obviously won’t help in his uphill battle against Grassley. But it’s not exactly a smoking gun either.

A libertarian group filed a lawsuit on Tuesday challenging the legality of the Biden administration’s federal student loan forgiveness plan. The group … END_OF_DOCUMENT_TOKEN_TO_BE_REPLACED

When we last left Congressional representative Katie Porter (D-CA), RedState revealed that she benefited from lower-cost housing in the high-rent … END_OF_DOCUMENT_TOKEN_TO_BE_REPLACED

With a tempest bearing down on Florida Politico tries a pre-emptive hit on Governor DeSantis and drowns in failure. The press sometimes just cannot … END_OF_DOCUMENT_TOKEN_TO_BE_REPLACED

While normal people are watching the approach of Hurricane Ian towards Florida with dread, the national press seems downright excited that they might … END_OF_DOCUMENT_TOKEN_TO_BE_REPLACED

New York City has historically been the American city with the most gun control. Not only does state law hold there, but the city has its own brand of … END_OF_DOCUMENT_TOKEN_TO_BE_REPLACED

NASA successfully crashed a spacecraft into an asteroid Monday, in a demonstration of “the world’s … END_OF_DOCUMENT_TOKEN_TO_BE_REPLACED

Among the many anti-gun bills recently signed by California Gov. Gavin Newsom was a measure aimed at … END_OF_DOCUMENT_TOKEN_TO_BE_REPLACED

President Biden continues to look weak in front of world leaders. This is not only a bad look for … END_OF_DOCUMENT_TOKEN_TO_BE_REPLACED

In a court filing on Tuesday morning, the Pacific Legal Group filed the first lawsuit against the … END_OF_DOCUMENT_TOKEN_TO_BE_REPLACED