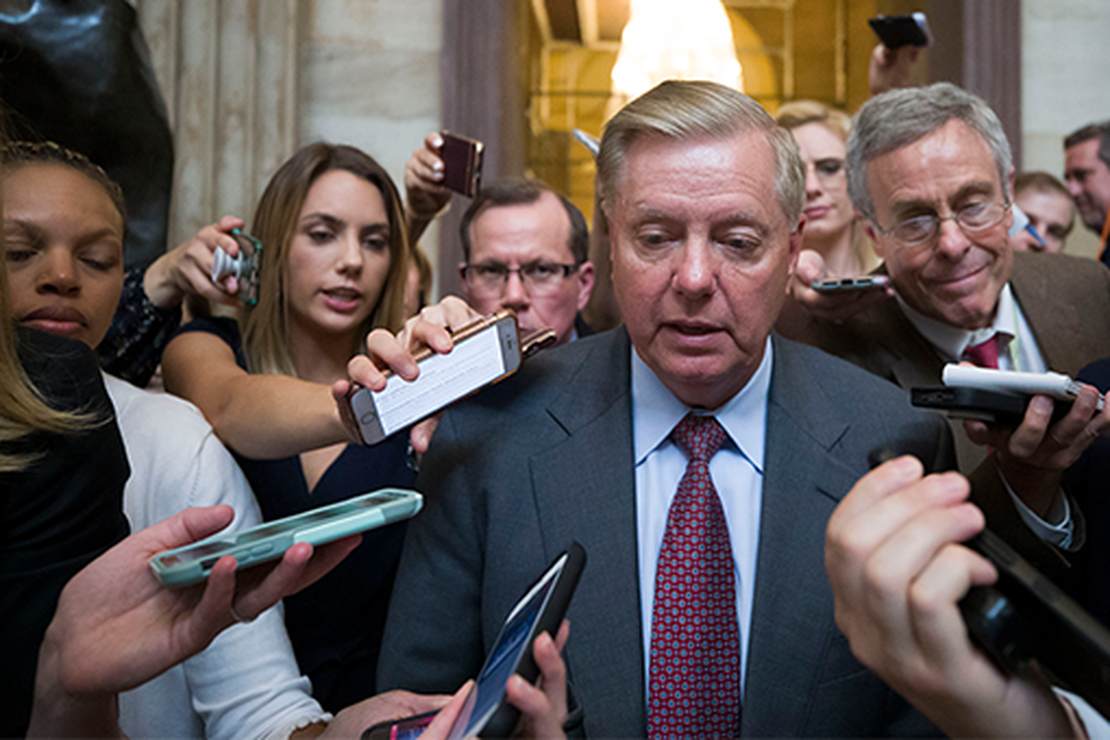 As we wrote last week, Senator Lindsey Graham (R-SC) introduced a bill that would create a federal ban on abortions after 15 weeks. My colleague Streiff characterized the move as Graham seeking to continue the establishment fundraising grift on abortion. But it’s also rather shortsighted, with the midterms just months away, to float legislation you know is unlikely to become law.

When Sen. Mike Rounds (R-SD) sat down with host Jake Tapper on CNN’s “State of the Union” program Sunday, he said the states should do the work the United States Supreme Court has left to them–hashing out the details on a “state-by-state basis”– the way that federalism intended. He also explained that he’s already done that in his state, even before the Dobbs decision, when he signed the state’s current law while “governor back in 2005-2006.”

But if Tapper hoped to ignite GOP infighting with a question on whether the lawmaker would support Graham’s bill, he failed. Note the CNN chyron in the clip below: “GOP Split….” Uh, right.

“I think a better approach probably will be to allow states to work through this.”@SenatorRounds (R-SD) shares why he does not support Sen. Lindsey Graham’s (R-SC) new bill to ban abortion after 15 weeks. @CNNSotu #CNNSOTU pic.twitter.com/uFi1H8CoO9

As people like to say in Sen. Graham’s neck of the woods: That dog don’t hunt.

“No, I think right now, we should allow the states to explore the different possibilities about the appropriate way,” Rounds told Tapper, noting laws that his own state has passed on the matter.

“I don’t think any proposal today would be successful in the House and the Senate,” Rounds said. “I think a better approach probably will be to allow the states to work through this and to find the appropriate language on a state-by-state basis and to find that common ground.”

“After that, maybe Congress steps in again, but at this point, I think the states are in a better shape to explore and to find the right direction on a state-by-state basis,” Rounds said.

The Hill’s piece also notes that Minority Leader Mitch McConnell of Kentucky has already indicated he opposes the Graham proposal.

Rounds added that “before the last [SCOTUS abortion] decision, we looked, as a group of us, at trying to ban abortion past 20 weeks. We weren’t successful at that time. I don’t think any proposal today would be successful in the House and the Senate.”

On Sunday, perhaps in an attempt to boost interest in his appearance on “Fox News Sunday,” an op-ed by Graham laying out his ideas was published on the network’s digital platform. He also said this, unsurprisingly.

“I’m pro-life, even in an election year.” –@LindseyGrahamSC on #FoxNewsSunday

As we reported earlier, Joe Biden made a stunning comment during a meeting about hunger when he looked around the room for Rep. Jackie Walorski … END_OF_DOCUMENT_TOKEN_TO_BE_REPLACED

Rachel Vindman, who on Tuesday posted a tweet jokingly suggesting that people should refer to Hurricane Ian using "they/them pronouns" in a bid to … END_OF_DOCUMENT_TOKEN_TO_BE_REPLACED

As the Halloween season approaches, pumpkin prices are expected to increase due to inflation, drought, and higher production costs. The average price … END_OF_DOCUMENT_TOKEN_TO_BE_REPLACED

The ex-husband of a deceased woman was caught on video urinating on her grave, the woman's family … END_OF_DOCUMENT_TOKEN_TO_BE_REPLACED

In the past 17 years, Denver has launched six plans and invested millions of dollars into addressing … END_OF_DOCUMENT_TOKEN_TO_BE_REPLACED

I’ve noted before that I tend to be fairly pro-police. After all, I was raised by a police officer … END_OF_DOCUMENT_TOKEN_TO_BE_REPLACED

A manhunt is underway to apprehend 42-year-old Porfirio Duarte-Herrera, an illegal alien from … END_OF_DOCUMENT_TOKEN_TO_BE_REPLACED