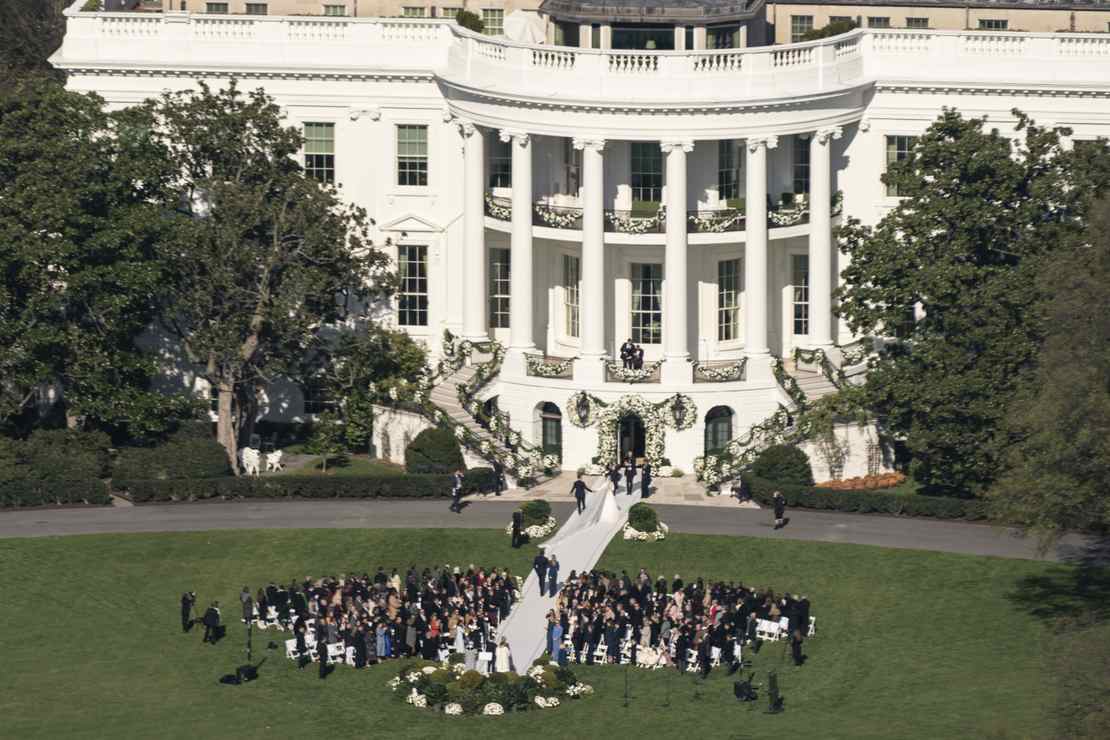 I wrote earlier about the shameful behavior of the White House when reporters tried to question Dr. Anthony Fauci about the origins of COVID, in what was likely his final appearance at a White House briefing. White House Press Secretary Karine Jean-Pierre treated reporters disgracefully and unprofessionally, in addition to denying the American people any response to that most important question.

But that wasn’t the only game-playing that they’ve had going on; the liberal media is calling them out in force over Naomi Biden’s wedding at the White House.

The wedding was Saturday, and the White House told the media that it was going to just be “private”–so they weren’t going to allow any of the White House press corps to be in attendance. “They have decided to make this wedding private. It is a family event. It is — and we are going to respect Naomi and Peter’s wishes,” Jean-Pierre claimed.

But then, it turned out that they gave the exclusive rights to Vogue to take pictures before the wedding a couple of days before.

For Vogue’s special digital cover, Naomi Biden, the eldest granddaughter of President Biden and First Lady Dr. Jill Biden, opens up about planning a White House wedding, and the details—no matter how small—that made it a spectacular family affair. https://t.co/B97vxf8ZAK

Some “privacy”–and White House reporters were livid that they’d been played, even indicating they’d asked about the Vogue story and been waved off (translate: lied to).

I had reporting in Oct about Vogue being tapped to cover this and I was waved off. Official explanation is that Vogue wasn’t there the day of. Loophole = the family staged a “wedding at the WH” shoot beforehand.

“Private” per @PressSec = not for the White House press corps. https://t.co/TbiuNpR1qV

I spent four years covering the Trump WH and two years covering the Biden WH. What’s fascinating is that they both lie, albeit in v different ways. Trump team was shameless, whereas Biden team is too cute by half. https://t.co/AphB967gHE

Vogue compares Naomi to the Princess of Monaco and says the wedding was akin to a “royal” one. pic.twitter.com/vTmF5V3SE0

Liberals then attacked the media, especially the Washington Post’s Ashley Parker, for expressing disturbance at the Biden White House.

But the media was right in this instance; it’s hardly a private affair when you’re having Vogue in to shoot.

After Parker was attacked by a lot of Democrats, she dug her heels in, noting this wasn’t the only occasion where the Biden team had shined them on.

TO BE CLEAR: Not all lies are created equal and the magnitude, frequency and audacity is certainly different. But the Biden WH, for ex, has also waived us off correct reporting about Biden’s SCOTUS pick, his Egypt trip, attendees in private meetings, etc. https://t.co/8eLW1BMTcZ

Glad to see that we are not the only news organization that has been waived off what turned out to be accurate reporting by the Biden White House. https://t.co/VbnxRdMwJd

Even the New York Times’ Maggie Haberman weighed it on why it was important to call out the lying.

We cover the small lies politicians tell because they can give way to bigger ones, for folks wondering why this is news. That’s what the press is supposed to do. https://t.co/bxMiLbVOSb

A Rafanelli-produced wedding is not an inexpensive endeavor. The price tag for many of his events starts at around $300,000 and can go into the millions of dollars. “Consistent with other private events hosted by the First Family and following the traditions of previous White House wedding festivities in prior Administrations, the Biden family will be paying for the wedding activities that occur at the White House,” Jill Biden’s communications director, Elizabeth Alexander, told CNN.

Now, I don’t know what they were paying for with that, apart from flowers; they had barely any decoration and it just looked like they threw some chairs out on the South Lawn. Maybe the dresses, the food, and the photography were incredibly expensive. Naomi’s clothes included designers from Ralph Lauren, Jimmy Choo shoes, and a “gold embroidered seafoam blue Reem Acra dress.”

I also am curious to know why the young couple has been living in the White House since August 2021; they are both lawyers and certainly well off enough to get a place of their own, rather than utilizing taxpayer-funded facilities.

But while I welcome any media calling out the lies from the Biden team, they’re upset here because they got personally played on the question of the wedding. How about calling out the significant lies that the Biden team is spewing every day? That’s the bigger, continuing problem here. But they’ll blow off steam here, and then go back to ignoring all the other continuing lies.

Canada’s TC Energy has temporarily shut down the 622,000 barrel-per-day Keystone pipeline after a leak was discovered in Kansas Wednesday night and an … END_OF_DOCUMENT_TOKEN_TO_BE_REPLACED

James Gunn hasn’t been in charge of DC Studios long, but it appears he’s already making huge moves including the cancelation of Patty Jenkins’ Wonder … END_OF_DOCUMENT_TOKEN_TO_BE_REPLACED

The state of Colorado has played host to a number of mass shootings over the years. From Columbine … END_OF_DOCUMENT_TOKEN_TO_BE_REPLACED

Three individuals entered a southern Louisiana home Tuesday night, and one of the intruders fired a … END_OF_DOCUMENT_TOKEN_TO_BE_REPLACED

This is never going to end, is it? “This” being the government’s continuing efforts to scare the … END_OF_DOCUMENT_TOKEN_TO_BE_REPLACED