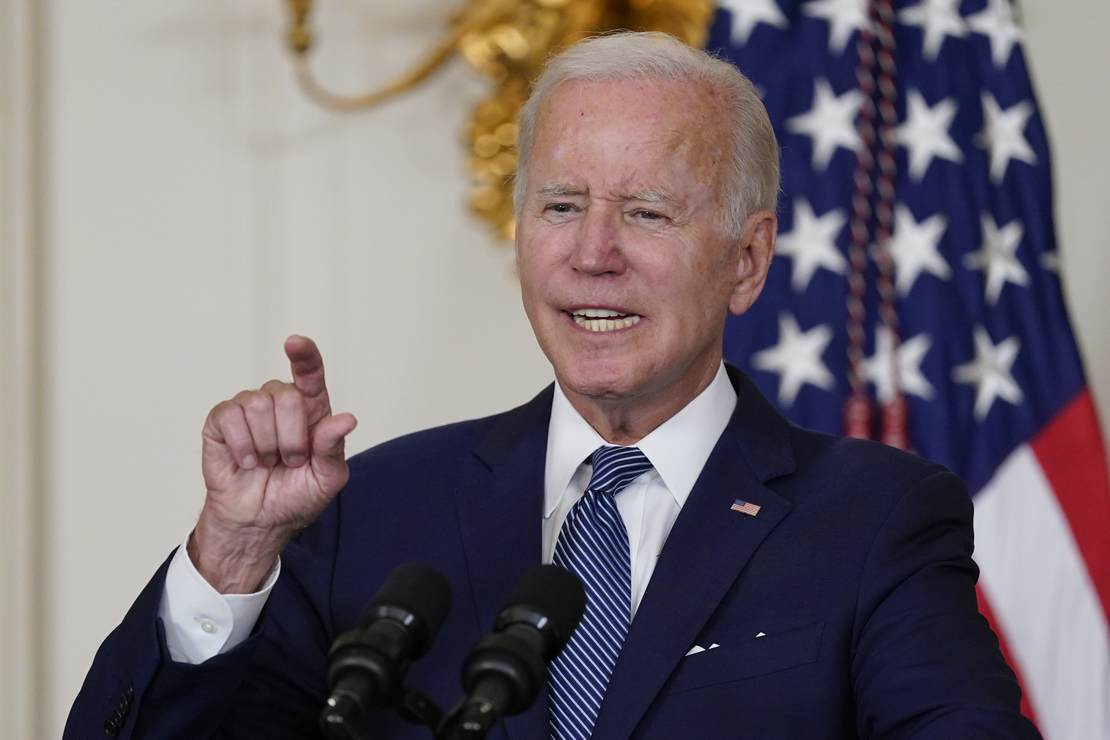 Do you envision Joe Biden as a war hero? Do you see him shirtless and sweaty, axing oak for the fire he’s busting at the biceps to build? From the sound of things on MSNBC, it wouldn’t be wrong.

Discussion turned to the Charlottesville conflict of August 2017, during which a man drove his car into a crowd. Horrifically, he killed one person and injured several others. Referring to the battle over whether a statue of Robert E. Lee should remain in place, Donald Trump estimated in the aftermath that there were “very fine people” on both sides.

“You had people in that group that were there to protest the taking down of, to them, a very, very important statue and the renaming of a park from ‘Robert E. Lee’ to another name,” the President said.

In the autumn of 2020, then-candidate Biden pegged the incident as his call to arms:

“Just a week ago yesterday was the third anniversary of the events in Charlottesville. Close your eyes, remember what you saw on television. Remember seeing those neo-Nazis and Klansmen and white supremacists coming out of fields with lighted torches, veins bulging, spewing the same anti-Semitic bile heard in Europe in the ’30s. Remember the violent clash that ensued between those spreading hate and those with the courage to stand against it. And remember what the President said when asked? He said there were ‘very fine people on both sides.’ It was a wake-up call for us as a country. And for me, a call to action. At that moment, I knew I’d have to run.”

Evidently, Joe’s dad issued a high-pressure charge — if you shouldn’t be silent about something, you’re obligated to become Leader of the Free World:

“My father taught us that silence was complicity. And I can never remain silent or complicit.”

Did Joe Biden — who previously held no interest in ascending to the land’s highest office — see the shock of Charlottesville as a sign he had to suit up and save America? It seems Dr. Jason believes so. Only perhaps Joe wasn’t watching it on TV. Maybe he was in the woods, a bandana ’round his head and survival knife on his hip. It’s possible he was made-up in mud, sleeping beneath a makeshift lean-to amid a torrential storm. The man may have been keeping attuned his razor-sharp instincts and apocalypse-suited survival skills.

Might he have caught word of North Carolina’s calamity as he fished with a homemade spear? Was he sporting pelts from land creatures he’d captured in crafty snares?

It doesn’t appear out of the question. Dr. Jason explains:

“[T]his is something that Joe Biden has believed in, and if you believe the story, which I do, that he said, is like, ‘I had no intention of running for President.’ He was…the retired war hero out in the mountain chopping wood. And Charlottesville brought him back into the fight that he thought he’d never have to fight again. And I found that to be charming and engaging. And I’ve always thought that Joe Biden is a good moral leader when it comes to these issues.”

Observe the athleticism of a lumberjack:

[P]olitical experts and education policy researchers say Biden, a supporter of civil rights in other arenas, did not simply compromise with segregationists — he also led the charge on an issue that kept black students away from the classrooms of white students. His legislative work against school integration advanced a more palatable version of the “separate but equal” doctrine and undermined the nation’s short-lived effort at educational equality, legislative and education history experts say.

And more recently, from the mountain man’s mouth:

Did Joe come out of the darkness as a decorated warrior? Per Newsbusters, not particularly:

Biden never served in the military, let alone having been a “war hero.” He got four draft deferments for “asthma.”

When it came to being a war hero, perhaps Johnson was confusing Biden with President George H.W. Bush. In World War II, he enlisted on his 18th birthday, and became the youngest naval pilot. He was shot down in the Pacific and tried his best to rescue his comrades.

As for a 1930s-Europe look, we’ve certainly seen such a thing:

Every time I think about The Red Speech I get creeped out pic.twitter.com/2VEeWApTw0

Of course, Joe Biden isn’t Hitler. But according to MSNBC, he may be Rambo.

As we reported earlier, Joe Biden made a stunning comment during a meeting about hunger when he looked around the room for Rep. Jackie Walorski … END_OF_DOCUMENT_TOKEN_TO_BE_REPLACED

Rachel Vindman, who on Tuesday posted a tweet jokingly suggesting that people should refer to Hurricane Ian using "they/them pronouns" in a bid to … END_OF_DOCUMENT_TOKEN_TO_BE_REPLACED

As the Halloween season approaches, pumpkin prices are expected to increase due to inflation, drought, and higher production costs. The average price … END_OF_DOCUMENT_TOKEN_TO_BE_REPLACED

The ex-husband of a deceased woman was caught on video urinating on her grave, the woman's family … END_OF_DOCUMENT_TOKEN_TO_BE_REPLACED

In the past 17 years, Denver has launched six plans and invested millions of dollars into addressing … END_OF_DOCUMENT_TOKEN_TO_BE_REPLACED

I’ve noted before that I tend to be fairly pro-police. After all, I was raised by a police officer … END_OF_DOCUMENT_TOKEN_TO_BE_REPLACED

A manhunt is underway to apprehend 42-year-old Porfirio Duarte-Herrera, an illegal alien from … END_OF_DOCUMENT_TOKEN_TO_BE_REPLACED