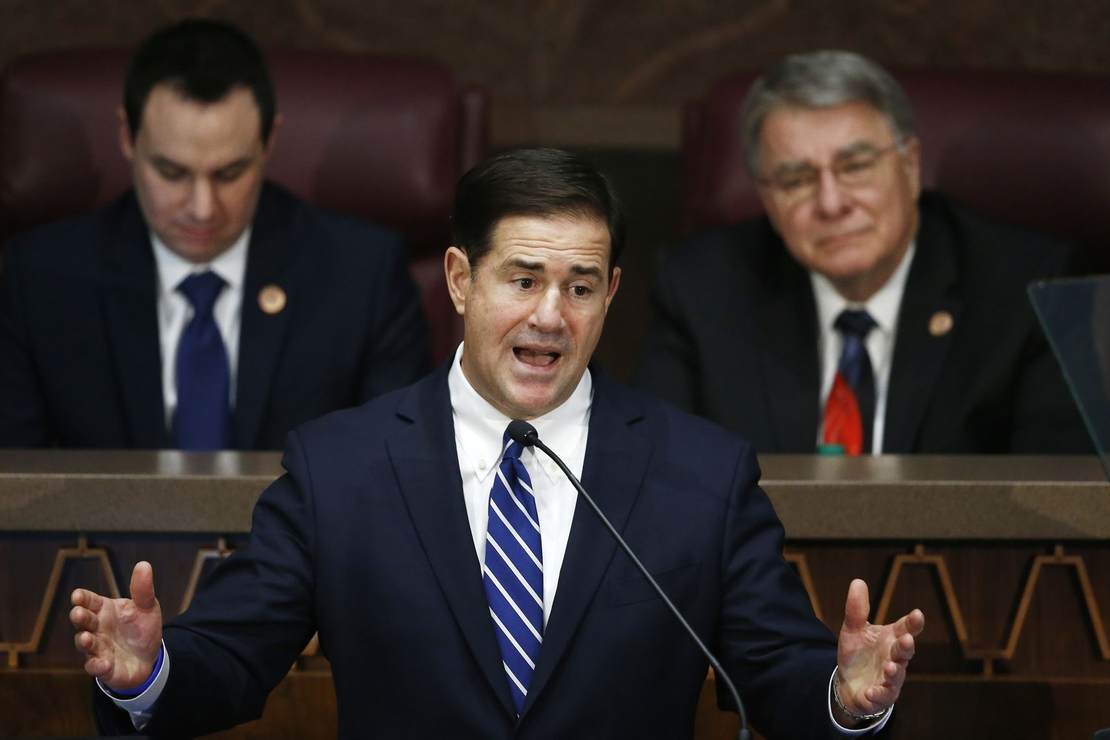 Arizona Republican Gov. Doug Ducey touted the importance of federalism in his address at the Ronald Reagan Presidential Library in Simi Valley, California, on Tuesday evening.

The outgoing governor said that he’s confident Republicans will win in 2022 because current Democratic policies in Washington are “having significant negative economic and cultural impacts.”

“But let’s be candid: We’re going to win because the other side is incompetent,” he said. “They are in charge and the federal government is seen as corrupt. That’s really bad for Americans, but yes, lucky for us.”

Ducey, who’s the chair of the Republican Governors Association, also mentioned how red tape from federal bureaucracy could be hindering progress at the state level.

“Nearly every single governor knows that we can do a better job serving our constituents without dealing with the red tape, the 10 of 14 bureaucracy, and the micro-management that comes from the federal government,” he said.

“I don’t need to be told by the Department of Transportation that infrastructure money is available for roads in Arizona…but it comes with strings attached – it needs to be roads with bike lanes! And light rail! And Electric charging stations! Oh, and by the way, don’t you dare modernize or privatize your highway rest stops.”

As the speech primarily focused on the significance of leadership at the state level, he called out Republicans in Washington who encourage the increase in the size of the federal government.

“We rightly talk a lot about the 1st and 2nd amendments. We could also revisit the 9th and 10th amendments. Reagan understood that. Republican Governors of today understand it. Yet many in Washington, including in our own party, don’t. States’ rights used to be a bad term. It meant segregation or separate but equal. But we’ve fought those battles. No serious person wants to revisit them — they’ve been won,” he said.

In a different sense, Ducey cautioned that Republicans should not put more emphasis on style over substance, but suggested once again that it is primarily “at the federal level.”

Sadly, this is not where the Republican party is today – at least at the federal level. I believe a dangerous strain of big government activism has taken hold, and for liberty’s sake we need to fight it with every fiber in our beings.

A vocal corner of conservative politics is defined more by attitude – and anger – than commitment to a specific set of ideals. A growing segment of today’s conservatives are just as happy bossing us around and telling us – and businesses – how to lead our lives as the progressive left is. I look at the party and worry that candidates are more defined by their attitudes than the policies they propose. And yes, a good many small government conservatives have morphed into bullies – people who are very comfortable using government power to tell companies and people how to lead their lives.

It’s a perilous place for us to be. Because once you adopt that mentality – that government knows best and is going to tell you what’s acceptable for how to live your life or how to treat employees – we are sharpening the knife the left will eventually use on us.

Ducey’s remarks mainly focused on the role of conservatism in contrast to the left, especially with Arizona’s next-door neighbor, California. There were several nods to former President Ronald Reagan and the work he did for the Conservative Movement, and Ducey closed out the speech by addressing the ongoing discourse on American democracy.

“There’s much talk about defending democracy these days. That’s all well and good. Yet we must remember — we are a Constitutional Republic. A form of democracy, one intended to distribute power broadly and specifically outside of Washington, DC – from school boards to statehouses,” he said.

Ducey’s address is part of the Reagan Foundation and Institute’s “A Time for Choosing” series, which is intended to discuss the path forward of the modern Republican Party. The series has featured speakers ranging from Arkansas Sen. Tom Cotton to Wyoming Rep. Liz Cheney, in order to present a broad set of viewpoints.

As we reported earlier, Joe Biden made a stunning comment during a meeting about hunger when he looked around the room for Rep. Jackie Walorski … END_OF_DOCUMENT_TOKEN_TO_BE_REPLACED

Rachel Vindman, who on Tuesday posted a tweet jokingly suggesting that people should refer to Hurricane Ian using "they/them pronouns" in a bid to … END_OF_DOCUMENT_TOKEN_TO_BE_REPLACED

As the Halloween season approaches, pumpkin prices are expected to increase due to inflation, drought, and higher production costs. The average price … END_OF_DOCUMENT_TOKEN_TO_BE_REPLACED

The ex-husband of a deceased woman was caught on video urinating on her grave, the woman's family … END_OF_DOCUMENT_TOKEN_TO_BE_REPLACED

In the past 17 years, Denver has launched six plans and invested millions of dollars into addressing … END_OF_DOCUMENT_TOKEN_TO_BE_REPLACED

I’ve noted before that I tend to be fairly pro-police. After all, I was raised by a police officer … END_OF_DOCUMENT_TOKEN_TO_BE_REPLACED

A manhunt is underway to apprehend 42-year-old Porfirio Duarte-Herrera, an illegal alien from … END_OF_DOCUMENT_TOKEN_TO_BE_REPLACED