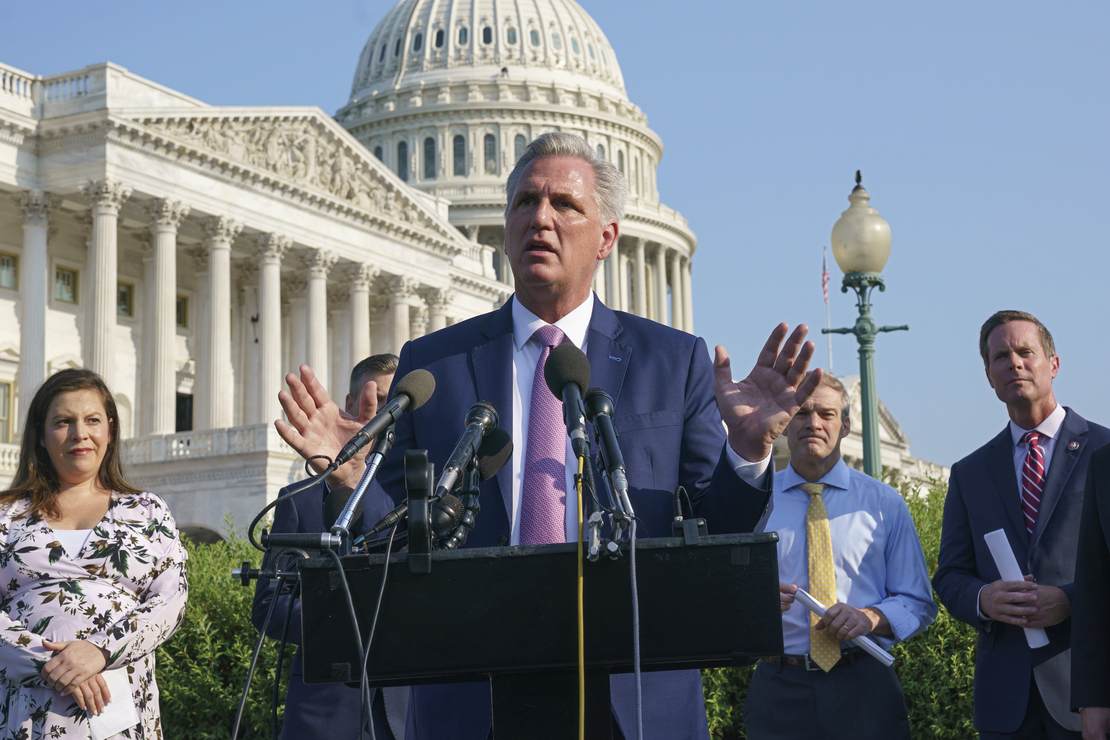 On Friday, the Republican House members gathered in Washington County, Pennsylvania to show a unified force and unveil its “Commitment to America.” House GOP Minority Leader Kevin McCarthy introduced it as a plan for a new direction, and one that will get the nation back on track.

McCarthy’s GOP plan is the result of a listening tour, as he told Breitbart:

“I’ve just gotten back from 26 states in the last 43 days,” McCarthy told Breitbart News. “We’re going to keep traveling. We’re here in Pittsburgh, Washington County, because we fundamentally believe we need to get out to talk to the American people; you listen to them, then you lead. We’re seeing an opportunity here that we haven’t seen in the past. What we do is we roll out the Commitment to America and then each week we have different themes for the elements of it. We want people to participate. We’re going to have certain days where we have national commitment days where we encourage people to go talk about the crime. Let’s go talk about the border. Let’s talk about how we make a stronger economy. Let’s talk about how we bring that supply chain back and what would it mean in this economy.”

At the unveiling on Friday, McCarthy more briefly encapsulated the plan on the floor of DMI, a business in Southwestern, PA.

“The commitment is a plan, a plan for a new direction,” McCarthy said in his introduction.

The four pillars of the Commitment to America are:

That means you can fill up your tank. you can buy the groceries. The paychecks grow, they no longer shrink.

That your children come first. They’re taught to dream big.

The government will no longer be about special interests. They should work for the American people, not the other way around.

McCarthy was flanked by House members and his two lieutenants: Conference Chair Rep. Elise Stefanik (R-NY) and House Minority Whip Rep. Steve Scalise (R-LA), who also spoke about the aspects of the plan.

Why did they unveil this Commitment to America plan on Friday, admittedly the throwaway news day where anything released can be long forgotten by Monday morning?

Why Southwestern Pennsylvania? While Pennsylvania is a battleground state, and the GOP is hungry for this Senate seat, it would have been a better visual to make this commitment in an area that the Democrats and the rest of America have roundly abandoned: the inner cities, say, on the streets of Philadelphia.

That would have been bold and gotten even more attention. It would also reinforce a talking point that Democrats have too long ignored.

Crime is rampant in most major cities, and drug use is aberrant. Doing it at some “American as apple pie” business in the middle of the state just lacks that necessary punch and screams that their “commitment” is only to a certain sector of America. From this location, they are preaching to the choir, a choir that is missing more than a few voices necessary to get the GOP over the top.

Lofty ideals worked back in 1994, and Gingrich was the perfect oracle. In 2022, almost 30 years later, the GOP Commitment to America has a “so last century,” feel, and one can safely say that McCarthy is neither an orator nor a statesman. It is well known that, should Republicans regain the House, he desires to be the Speaker of the House. McCarthy does not instill confidence and reeks of desperation.

In this current age, with people being robbed and murdered at their front doors and their children being groomed by sexual deviants and targeted for mutilation, this plan needs some fangs. It sounds like a proposal of marriage rather than an actual battle plan.

It also seems, once again, that the GOP still fails to understand the fight they should be waging on behalf of the American people. If part of this plan is to continue listening up to November 8, let’s hope someone lights a match that can set purposeful and practical fire to this Commitment to America.

The other side is ruthless, names their biggest bills with total lies (“inflation reduction act!”)

Maybe the GOP could realize it’s in a political street fight before Nov 8th?

Former President Donald Trump flashed his frustration with the Republican leadership on his Truth Social account yesterday, lashing out at McConnell’s … END_OF_DOCUMENT_TOKEN_TO_BE_REPLACED

Week 31 of Putin’s War, that projected 3-day romp through Ukraine is not starting off well. Just one day after annexing the Ukrainian oblasts of … END_OF_DOCUMENT_TOKEN_TO_BE_REPLACED

Once upon a time, back when “Saturday Night Live” was funny on a consistent basis in the late 1980s, … END_OF_DOCUMENT_TOKEN_TO_BE_REPLACED

Five men were arrested on June 17, 1972, while trying to bug the Democratic National Committee’s … END_OF_DOCUMENT_TOKEN_TO_BE_REPLACED