There hasn’t been much to like about the Republican Party lately, but a glimmer of hope appeared on the horizon on Sunday after news broke that Harmeet Dhillon is preparing to challenge Ronna McDaniel for the position of RNC chair.

Aside from being a personal friend of RedState, Dhillon is a popular figure on the broader right, having gained immense notoriety on the conservative legal front. A regular analyst on Fox News, she is also a committeewoman for the RNC, and according to Politico, she’s ready to push for much-needed change.

Ronna McDaniel is about to draw a challenge to her post as Republican National Committee chair.

Harmeet Dhillon, a RNC committeewoman whose firm represents Donald Trump, is prepping a bid for party chair, according to two people familiar with her planning. Dhillon has been talking with fellow RNC members about a prospective run, and those close to Dhillon say a formal launch could come within the next few days.

“After three successive terms of underwhelming results at the polls for the GOP, all the while with leaders congratulating ourselves for outstanding performance, I feel that we owe it to our voters to have a serious debate about the leadership of the party and what we must change to actually win in 2024,” Dhillon said in a statement.

Given this is an anonymously sourced article, I’ll leave open the possibility that Dhillon doesn’t ultimately run, but selfishly, I really hope this materializes. Ronna McDaniel has been an unmitigated disaster as RNC chair and it’s astonishing she hasn’t resigned in disgrace. Since she’s taken over, Republicans have gotten mowed down in the blue wave of 2018, lost the White House and the Senate in 2020, and squandered perhaps the best electoral environment in decades in 2022, only barely taking the House of Representatives in what should have been a red wave year.

To add insult to injury, McDaniel then made the media rounds bragging about how great she and the party did when it was obvious to anyone with a pulse how huge of a screwup the election was. Someone who is willing to gaslight their own voters like that has no business being anywhere near power. Whatever qualities she possessed when Donald Trump hand-picked her for RNC chair, they haven’t led to electoral wins. At some point, putting skins on the wall matters, and doing the same thing over and over while continuing to lose is the definition of insanity.

If this Politico report is true, and Dhillon jumps into the mix as the only credible challenger to McDaniel (the pillow guy is not a serious candidate), it will be interesting to see how things shake out. McDaniel is very much in the Trump camp, but Dhillon’s law firm represents Trump on his most serious legal matters. Hopefully, he would choose to stay out of the matter and just let things play out.

Regardless, if I had a vote, it’d be for Dhillon. She’s shown herself to be a capable, strategic thinker, and that’s exactly what the RNC needs right now. McDaniel had her chance, and it just hasn’t worked out.

In the wake of the 2022 midterms, and the resulting red fizzle performance by Republicans, many on the right have been clamoring for a change in many of the GOP’s leadership positions. It seems that My Pillow CEO Mike Lindell has taken to heart Tucker Carlson’s warning to not “reward mediocrity”; Lindell announced today that he will run against Ronna McDaniel to become the next chairman of the RNC.

BREAKING: Mike Lindell just announced that he’s running against Ronna McDaniel for GOP chair — and Trump has already endorsed the My Pillow Guy.

“With all my due diligence and in prayer, I am 100 percent running for RNC chairman against Ronna McDaniel,” Lindell said. “It’s going to change real fast. We’re going to get our country right, really quick.”

One of Lindell’s main complaints about the Republican Party structure is that they raise “money and then they don’t do anything with election crime.” He told Bannon that, as chairman, his focus would be on election integrity, stating he’d like to get the party to support Donald Trump-endorsed candidates like Kari Lake and Mark Finchem of Arizona. Lindell indicated he had garnered support from many party donors and planned to call all 168 committee members in an effort to oust McDaniel.

Speaking of Trump, Lindell told Axios he did not call the former president before announcing, stating, “This is my decision.” The two have appeared together many times and seem close, but supporting Lindell’s run for RNC chair could cause Trump some political headaches as he launches his 2024 presidential campaign. He’s already endorsed Kevin McCarthy as the next Speaker of the House, a move seen as supporting the Republican establishment. If Lindell does indeed have the support of big donors, it’s less risky for Trump to support him. But Trump did endorse McDaniel in 2016, and the new chairman will oversee the 2024 election cycle.

The Hill reported last week that McDaniel had the support of at least 101 RNC committee members:

The members wrote that McDaniel has led the RNC well and made it “a stronger and more effective force for our cause.”

“These are perilous times and the Biden presidency, abetted by the extremist consensus among Democrat Party elites and elected officials, has been, is, and will continue to be a disaster for our nation,” the letter continues.

“We believe we must elect a Republican President and more Republican Senators and House members in 2024 to restore, preserve, and protect the United States of America.”

Lee Zeldin, fresh off of giving Kathy Hochul a serious challenge in the New York gubernatorial race, has indicated he is also “very seriously considering” running for RNC chairman. In an email to committee members, he wrote:

“It is time for our party to retool, transform, win back the Presidency in 2024, expand our number of Republican held seats in Congress, and elect the maximum number of down ballot races across the country,” Zeldin said in the message. “The Republican Party needs to be all in to do everything in its power to save America.”

Zeldin has momentum on his side and, although he lost his own race, is widely credited for helping flip four seats in New York for the GOP, propelling Republicans to take control of the House of Representatives come January. He has just enough political experience to make him knowledgeable about party mechanics, but not so much that he’s seen as part of the old guard. This has to be intriguing for many RNC committee members, and McDaniel would doubtless see her 101-vote advantage dwindle if Zeldin were to decide to join Mike Lindell in mounting a challenge against her.

Some claim Republicans are in the midst of a civil war, which may be true, but it may also simply be a righting of the ship. There’s no reason not to have a robust challenge to leadership positions, and the RNC race will certainly be an early indicator of how the party plans to move forward after a disappointing cycle. 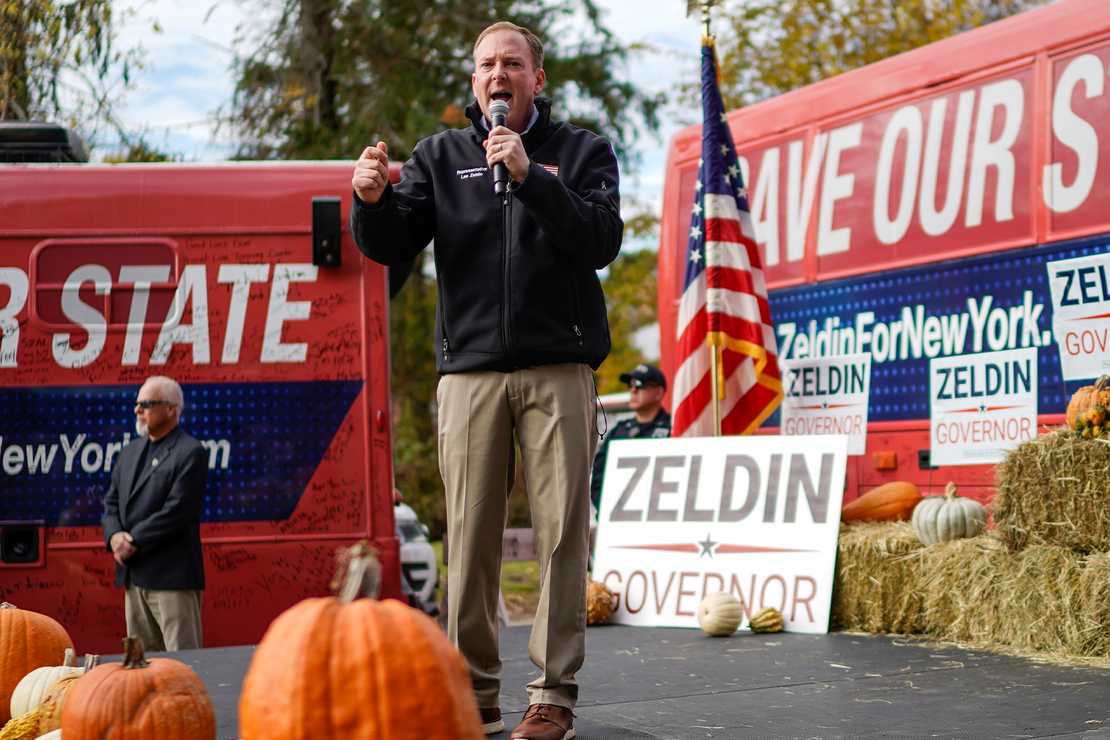 Though Rep. Lee Zeldin failed to win the gubernatorial race in New York last Tuesday, he put in a hell of an impressive showing considering the political make-up of the state. He’s also being credited with helping Republicans retake control of the House after four of them flipped Democrat-held seats in the Empire State, including DCCC Chair Sean Patrick Maloney’s.

In the aftermath of the election, rumors started to fly that Zeldin was considering making a bid for the chairmanship of the Republican National Committee, a position currently held by Ronna McDaniel who has already publicly declared her intentions to run again.

Over the last week-plus, Zeldin further fueled speculation that he was interested, with a number of tweets posted where he’s spelled out the direction he believes Republicans need to take. And on Thursday he confirmed with the RNC via email that he was “very seriously considering” running:

The email, first obtained by POLITICO, said that he is “very seriously considering” running for leadership of the party.

“It is time for our party to retool, transform, win back the Presidency in 2024, expand our number of Republican held seats in Congress, and elect the maximum number of down ballot races across the country,” Zeldin said in the message. “The Republican Party needs to be all in to do everything in its power to save America.”

In his email to RNC members, Zeldin wrote, “Not only should the Republican Party compete in all 50 states, and ensure we are driving up turnout within our base, but we also need to go to all communities no matter how blue they are, show up often, build relationships, and advance our proposals on education, upward economic mobility, housing, mental health, public safety, and more. This means making sure people know what we stand for, and not just what we are against.”

Though McDaniel loyalists will no doubt stand by her, some members of the RNC are already publicly pledging their support for a Zeldin candidacy, including Texas GOP chair Matt Rinaldi:

I’m inclined to agree that new leadership is needed at the RNC considering the anticipated red wave turned out to be little more than a red trickle. And though House Republicans put in a strong showing in 2020, they failed to win the House.

As to why Zeldin would be a good choice? He knows how to get loud, he gets that you should never back down, he seems to have his finger on the pulse of what voters are concerned about the most (in New York, it was crime, the justice system, and economic matters), and he’s shown a willingness to try and connect with voters in areas where other Republicans fear to tread.

Though Republicans in the House and Senate have made clear they’re all in for more of the status quo, let’s hope at the RNC’s winter meeting in January that the consensus is that change is needed and now – and that it needs to start at the top.

A young man from Alabama is now in custody after he allegedly brought cocaine laced with fentanyl to a bachelor party earlier this year, and one of … END_OF_DOCUMENT_TOKEN_TO_BE_REPLACED

In the wake of releasing the explosive “Twitter Files,” which laid bare the extent to which the platform colluded with Democrats to censor the Hunter … END_OF_DOCUMENT_TOKEN_TO_BE_REPLACED

There’s a lot going on out there in the news, and to some extent, that’s put the FTX scandal on the … END_OF_DOCUMENT_TOKEN_TO_BE_REPLACED

The state of New York was relatively quick to ban so-called ghost guns. The idea of homemade, … END_OF_DOCUMENT_TOKEN_TO_BE_REPLACED

In response to alleged "overcrowding" in their Sky Club lounges, Delta has announced a "solution" … END_OF_DOCUMENT_TOKEN_TO_BE_REPLACED