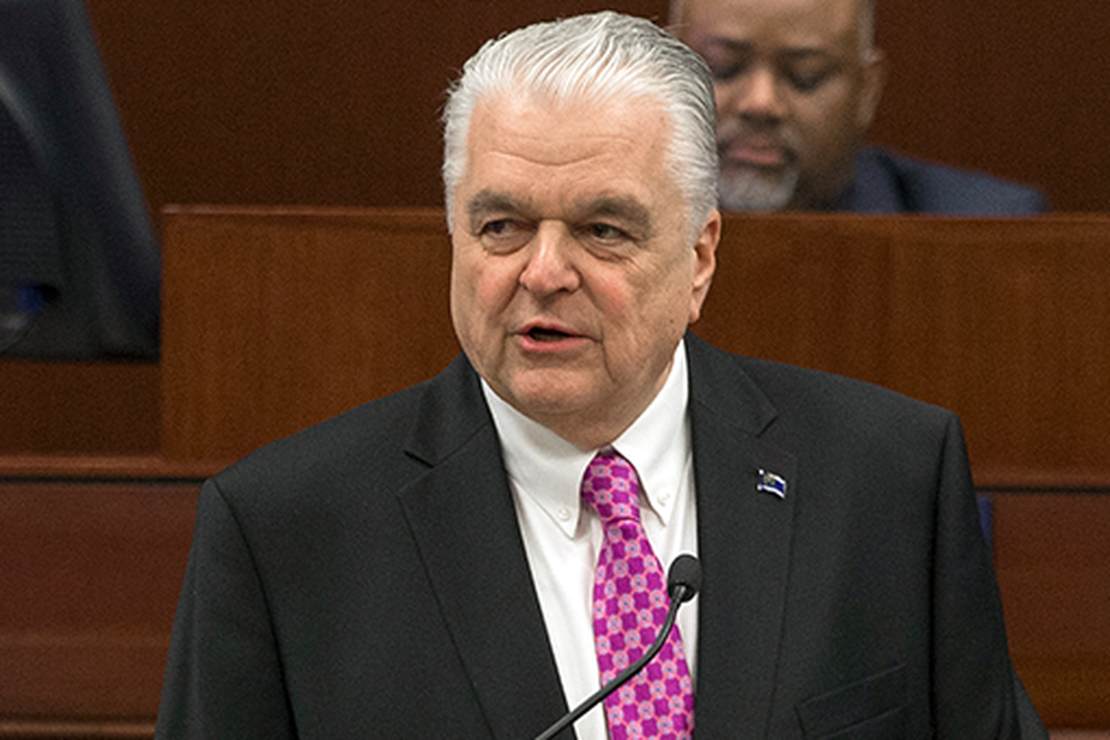 Nevada’s Governor’s race between Democrat incumbent Steve Sisolak and Republican challenger, sitting Clark County Sheriff Joe Lombardo, is hotly competitive — and expensive. Ad Impact reports this to be the second most expensive gubernatorial general in the nation. The race’s combined total is $54 million, with $28 million slated for future advertising reservations.

#NVPol: The second most expensive gubernatorial general this year is #NVGov.

In the polls, Lombardo has taken the lead. The Trafalgar Group released polling data this week that showed Lombardo besting his opponent by three points. While Lombardo edges ahead, Sisolak has run a rocky campaign with an indiscernible central theme.

Ultimately, state public health officials found that Northshore’s PCR tests missed 96% of the positive cases from the university campus — errors that sent people infected with COVID-19 back into the community. But to date, neither state nor county health officials have alerted the public to the inaccurate tests.

ProPublica’s investigation also found that Northshore used political connections, including contracting with the sons of a close friend to the governor, to fast-track its state laboratory license application and secure testing agreements with five government entities in the state.

The Lombardo campaign has released an ad addressing the Northshore scandal along with the allegations that Sisolak’s wife received contracts, including a no-bid contract while her husband was governor. Other scandals are outlined on a Lombardo for Governor website, sisolakscandals.com

Northshore Steve is the most corrupt governor in America.

One scandal not mentioned on the website was that the Governor was found to be at fault for a car crash last year, and for some reason, his wife Kathy insisted on throwing away bags of garbage from inside the car while police investigated. Many Nevadans thought while the Governor appeared unwell, his wife’s immediate concern of throwing away, or removing items from the scene seemed suspicious.

On top of appearing drunk, Why was the Governor Sisolak’s handler & wife allowed to remove evidence from vehicle, claiming they had to remove “garbage” — would that be your first worry after an accident, unless that garbage was open liquor or drugs!https://t.co/bfFOJNRWFp pic.twitter.com/YguzHqd1zo

Earlier this month, a politically-motivated homicide of Las Vegas investigative journalist Jeff German took place, and the accused murderer is a sitting Democrat public official, Robert Telles. Previously, Sisoalk had appointed Telles to a state board he was quietly removed from in the days following the arrest. Telles is still an elected county official. I covered Sisolak’s failure to address the situation properly in a piece called, Democrat NV Gov Steve Sisolak Appointed Accused Murderer Robert Telles to State Board.

While Sisolak often doubles down in the era of Dobbs, it just doesn’t make sense for Nevadans who know the Governor’s office has nothing to do with the abortion issue, as any statutory changes go to the ballot for the voters to decide. I wrote about the Democrats’ campaigns attempting to mislead voters on this issue here: Too Stupid: Nevada Democrats’ Abortion Lies Insult Voters’ Intellect

Stronger Nevada PAC has released an ad that clarifies the misleading rhetoric on abortion in the state.

Sisolak’s campaign has also been about other themes, often tying himself to local sports franchises. He has released political ads suggesting he is the “biggest sports fan” and tweeted that Las Vegas is the undoubted “sports capital of the world,” even though it does not have an NBA or MLB team. It’s strange to watch a politician ride the coattails of sports franchises in their election campaign and it’s counter-productive to alienate sports fans by politicizing teams. But, I’ll be looking forward to the in-kind donation disclosures from the franchises.

There is no doubt Las Vegas is the #SportsCapital of the WORLD and I’m damn proud of that.

In other ads, he has acted offended by how crippling 15.6 percent inflation in Nevada has impacted the prices of… bacon. To be clear, he does not attribute the rising costs of groceries to inflation, but blames the companies and tells constituents he is helpless to force companies to cut their prices. Because you know, the bacon-makers are to blame here.

From what appears to be his Youtube channel, (which the about page still suggests he is a Commissioner, not the Governor… hats off to a detail-oriented multi-million dollar campaign team) the campaign video is simply titled, “Bacon.”

Sisolak has promised “no new taxes,” although his track record wouldn’t suggest that to be true. In Sisolak’s prior campaign, he suggested increasing property taxes on Nevadans.

And, the Democrats made good on that promise — or attempted to. In the last legislative session, a property tax cap bill was brought forward. I personally gave an opposition public comment that was published in the linked article.

Caller Brittany Sheehan said that she did not believe that the state government or Nevada’s school system needed more funding.

The schools have done less for our students in the past year than any other time of our lives,” Sheehan said. “CCSD itself has a multibillion-dollar budget and the state did get $4.5 billion recently in COVID relief, so I don’t think that this is appropriate, especially at this time.”

On the issue of taxation, property taxes are not the full scope of Sisolak’s track record. In 2019, he signed two bills into law, SB 551 and SB 542, extending taxes that were later deemed unconstitutional by the Nevada Supreme Court after Republican legislators sued. The state was forced to refund the illegally collected taxes.

Again, in 2021, the Governor signed a tax increase, this time for the mining industry. There is a long backstory of how that bill got pushed through, the sausage making starting in a 2020 Special Session called to balance the state budget deficit of $1.2 billion stemming from the Governor’s economically crushing pandemic shutdowns. Tying the sports-fanaticism to taxation amnesia, Sisoalk’s shutdowns also caused the Allegiant Stadium bond payments to have to be paid from a county debt reserve fund, not once but twice.

Sisolak is campaigning upon Nevada being a pro-union state. He never mentions that Nevada is actually a Right to Work state, the same way he isn’t honest with voters about what state law would dictate about abortion. Who cares what the state law actually says, right Steve? Politically, the unions have an outsized influence, indeed. They are a one-stop shop for politicians offering donations, volunteers, and endorsements.

Sisolak spent Sunday with the state’s largest union, Culinary Union Local 226. While Sisolak was starting chants and fist-pumping in some cosplay attempt at being Jimmy Hoffa, back in reality reports came out saying that over 10,000 Culinary Union members are still without jobs, over two years after Sisolak’s forced-unemployment executive orders. This makes up about 20 percent of the union’s members.

You’ve always had my back and I’ll always have yours!#UnionStrong #Culinary226 pic.twitter.com/9Y7uCbyrUK

Note: It is unknown why the rank-and-file are all wearing masks, since such mandates are not in place for the state, and the Governor did not appear to have a mask.

In other recent reports, it was alleged that Culinary Union members got favorable treatment in pandemic unemployment programs:

The former acting chief of the Nevada Department of Employment, Training and Rehabilitation (DETR) says he blames the governor’s office for actions that slowed down Nevada’s response to a torrent of unemployment claims during the pandemic, and he believes concerns about political optics and news headlines played an outsized role in the response to the crisis.

Dennis Perea, who worked 14 years for DETR and ended as its acting director before abruptly resigning in July of 2020, didn’t publicly explain his departure at the time. But in a recent interview, he said that the decision was “a death by a thousand cuts,” including a sense that Democratic Gov. Steve Sisolak’s office and a staff heavier on campaign experience than state government experience prioritized special interest groups such as the Culinary Union.

Sisolak is using everything from holding kittens to posing with unsuspecting children in his re-election efforts. I’m sure he’s asking the kids, “Hey, do you want to be an exploited youth participant in a contentious multi-million dollar campaign effort so I can remain in power? You do?!”

Sisolak has recently posted himself in attendance as a guest of honor addressing the congregation of a church in the black community, although his prior treatment of the religious institutions was also deemed illegal. After a court reversed his heavy-handed order on church capacities, Sisolak expressed he was “disappointed” with the decision.

Among other things that “disappointed” Sisolak was that President Joe Biden’s attempt to force-vaccinate private businesses was blocked by the US Supreme Court. It seems like any time the pesky Constitution gets in the way of taxation efforts, church closures, or forced medical procedures Sisolak feels disappointed.

Nevada Governor Steve Sisolak says he is disappointed in the SCOTUS decision to block the vaccine mandate but says he doesn’t want to enforce a mandate in Nevada.

We all know the real reason why he won’t.

It would be political suicide to his toss-up race. pic.twitter.com/8Q32PjiRUJ

Nevada set the all-time record for unemployment rates in the nation with a swipe of Sisolak’s pen, we have the third-highest gas prices in the nation, we rank 49th in education, and rent increases are second-highest in the nation. Nevada was ranked second-worst in economic responses to the pandemic, shutting down 95,000 small businesses permanently. The facts are that Nevada’s families are suffering from unaffordable costs of living, our students are suffering major education setbacks in a dysfunctional education system, and all that suffering has a clear trajectory under Sisolak’s tenure.

I can cover the themes of Sisolak’s re-election campaign, but I cannot answer the question of what the merits of his campaign are based on, at all. It seems like they are making it up as they go. Sports ball, pork products, disingenuous taxation and abortion rhetoric, elevating all the institutions he harmed be it small businesses, churches, or unions with a workforce still displaced: Sisolak’s campaign is much ado about nothing.

Police officers in Milwaukee don’t seem to trust their sidearms. They carry the Sig Sauer P320, a firearm popular with a lot of people and basically … END_OF_DOCUMENT_TOKEN_TO_BE_REPLACED

As if Washington, DC, wasn’t dysfunctional enough, the city’s deputy mayor has been arrested and charged with assault and battery. According to Fox 5, … END_OF_DOCUMENT_TOKEN_TO_BE_REPLACED

As my colleague, Sister Toldjah reported, there were some memorable moments during Joe Biden’s remarks while visiting Florida on Wednesday to survey … END_OF_DOCUMENT_TOKEN_TO_BE_REPLACED

President Joe Biden made a vulgar comment that was caught on a hot mic during his review of the damage from Hurricane Ian Wednesday. Biden arrived … END_OF_DOCUMENT_TOKEN_TO_BE_REPLACED

The FBI has raided the home of a pro-life activist in connection with a protest that took place in March of 2021. Other participants at the event were … END_OF_DOCUMENT_TOKEN_TO_BE_REPLACED

The right of self-defense is, generally, about as non-controversial as you can get. Even vehement … END_OF_DOCUMENT_TOKEN_TO_BE_REPLACED

The FBI is out with its numbers for murders and other violent crimes over the past year. The numbers … END_OF_DOCUMENT_TOKEN_TO_BE_REPLACED

After President Ronald Reagan was shot in 1981, as he was about to undergo surgery, he joked to the … END_OF_DOCUMENT_TOKEN_TO_BE_REPLACED

According to a recent report on active shootings released by the FBI, armed citizens have stopped … END_OF_DOCUMENT_TOKEN_TO_BE_REPLACED

When the magic words “vote fraud” are mentioned, what comes to mind for most people, no matter their … END_OF_DOCUMENT_TOKEN_TO_BE_REPLACED