Children of military families were forced to wear masks and stay socially distanced Tuesday at the White House as First Lady Jill Biden read them a children’s book.

Biden welcomed a second-grade class from Malcolm Elementary School in Waldorf, Maryland for a Christmas event at the White House that included a Donkey Hodie puppet show sing-a-long, appearances from the Wild Kratts stars, and assorted characters from PBS shows.

The children were brought into the White House room wearing masks, as the coronavirus pandemic continues, and ordered to sit on paper stars set out on the carpet, separating them from each other.

The first lady entered the room without a mask spoke to the children for a few minutes before sitting down next to the fireplace to read them a story.

U.S. first lady Jill Biden smiles after she read her book Don’t Forget, God Bless our Troops to a second-grade class from Malcolm Elementary School in Waldorf, Maryland, in the State Dining Room of the White House November 29, 2021 in Washington, DC. (Photo by Alex Wong/Getty Images)

The book, “Don’t Forget, God Bless Our Troops,” is a book she wrote herself, inspired by her granddaughter Natalie.

In the story, written by Jill Biden, a young girl Natalie comforts her brother “Hunter” while her father is deployed overseas.

The children’s book she wrote was inspired by her granddaughter Natalie and Hunter, children of Biden’s son Beau Biden. 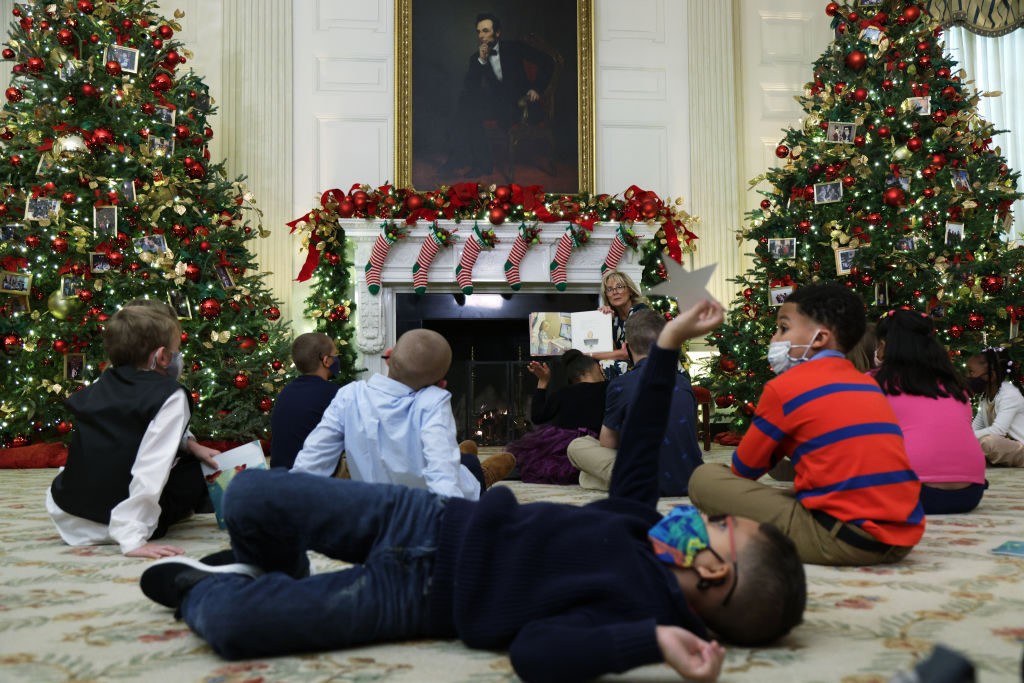 At no point was Jill Biden spotted wearing a mask during the event. 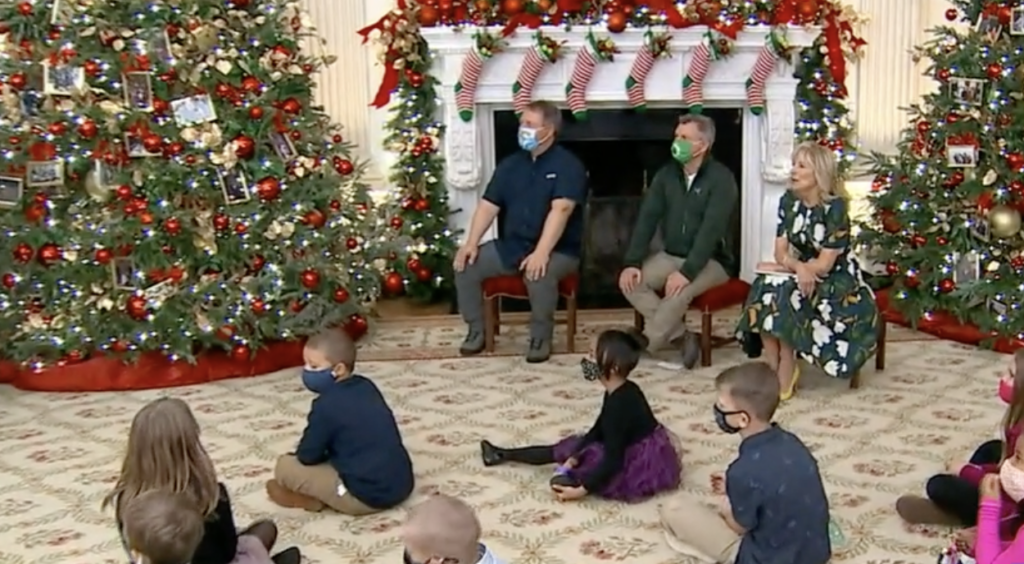 Fauci, who was responding to criticism from the GOP for his handling of the coronavirus pandemic, said over the weekend, “[I]t’s easy to criticize, but they’re really criticizing science because I represent science. That’s dangerous. To me, that’s more dangerous than the slings and the arrows that get thrown at me.”

Hagerty told host Maria Bartiromo that it was “very difficult” to trust anything Fauci says because he has “discredited himself” by putting out disinformation. He added that distrust has not helped get people vaccinated against the virus.

“Well, it is very difficult to put faith in anything that Fauci says at this point given the way he has discredited himself,” Hagerty stated. “And I think the disinformation that we’ve seen coming from Fauci is going to cost the administration. It really has crushed the American public’s confidence in what we are hearing regarding the science, and that does not bode well for people getting vaccinated.”

He continued, “We need to look at all of the science, including natural immunity, to get to the bottom of this.”

Ultimately, people should be able to make these decisions. I don’t think people want this decision yanked away from them. I don’t think they want to allow a precedent where the federal government could come in and just force you to do what it wants you to do. And make no mistake about it, those individuals who have been gone through a normal vaccination series for COVID, you will be determined to be unvaccinated very soon. They will do that. They are going to tell you, “You’re unvaccinated and you have to get a booster. Otherwise, you could potentially face loss of employment or other types of penalties.”

The subsequent headline in The Independent: “Fact Check: DeSantis falsely claims vaccinated citizens without boosters could be declared unvaccinated and lose their jobs.”

The news in Axios, this morning: “The emergence of the Omicron COVID variant is turbocharging the push for vaccine boosters, and experts say a booster may soon become a requirement to be considered ‘fully vaccinated.’… Bob Wachter, chairman of the University of California, San Francisco Department of Medicine, told Axios he expects vaccine mandates will soon include requiring boosters.”

But we had been reassured that needing a booster to be considered fully vaccinated was a false claim! Apparently DeSantis was just correct too early.

It is clear that quite a few self-appointed “fact-checkers” begin with the assumption that Ron DeSantis must be wrong about everything.

Police in Queensland, Australia, charged a woman with arson on Sunday after she allegedly set fire to a hotel room in which she was quarantined according to state coronavirus protocol, Australia’s Seven News reported Monday.

An unidentified woman, 31, allegedly started a fire under a bed in her room at the Pacific Hotel on the morning of November 28 in the city of Cairns. The woman had checked into the room on November 26 along with her two children. The woman’s children were inside of the hotel room along with their mother when she started the blaze, according to the Queensland Police Service.

The fire “destroyed the room and damaged two floors” according to Seven News. The Pacific Hotel’s operators were forced to conduct an emergency evacuation of the building in response to the blaze. All 163 guests staying at the facility at the time plus the building’s staff successfully evacuated and no injuries were reported, Queensland Police Acting Chief superintendent Chris Hodgman said on November 28.

“We did have some issues with that female occupant that we were managing,” Hodgman said of the alleged arsonist on Sunday, though he did not provide further details.

Hodgman added that the Pacific Hotel’s evacuees “were initially held at another location but have since been relocated.”

Aitken said the possibilities included moving the guests to another state-run quarantine hotel in Cairns “or transferring them to Brisbane.”

Brisbane is the capital of Australia’s Queensland state and is located roughly 1,045 miles south of Cairns.

Queensland health officials have taken over the Pacific Hotel in recent weeks for use as a coronavirus quarantine facility.

“Anyone who arrives in Queensland from another state or overseas must quarantine for 14 days under the state’s pandemic borer restrictions,” the New York Times reported on Monday.

“Those who have a house that fits government criteria around ventilation may undergo home quarantine, but those who do not must quarantine in a designated hotel and foot the bill themselves,” according to the newspaper.

The 31-year-old woman who allegedly started a fire at the quarantine hotel in Cairns on Sunday had recently arrived in Queensland from the southern Australian state of Victoria, according to Seven News. The Cairns Magistrates Court heard the initial proceedings of the woman’s case on November 29 before adjourning until November 30.

In addition to one count of arson, the individual has additionally been charged with one count of “willful damage.”

British Airways has temporarily suspended its flights to Hong Kong in order to avoid the risk of any more of its crews being sent to a notorious, prison-like quarantine centre.

The decision was made after one of its crew members tested positive for Coronavirus on Saturday, resulting in an entire crew of nearly 20 cabin staff and pilots being sentenced to a 21-day quarantine order at Penny’s Bay quarantine camp.

According to industry insider Mateusz Maszczynski, a former flight attendant who now blogs about air travel, this is the third time a BA crew has been sent to the camp.

The facilities at Penny’s Bay have been heavily criticised because they are very similar to what you might find in a modern prison.

British Airways has been blasted for continuing to send crew to Hong Kong despite the risk of them being imprisoned against their will. Other airlines, including Emirates and KLM Royal Dutch Airlines, operate flights to Hong Kong via Bangkok so that pilots and crew never have to step foot off the aircraft in Hong Kong.

In a statement, a spokesperson for the Heathrow-based carrier said it had reluctantly decided to suspend flights to and from Hong Kong.

“We have made the difficult decision to temporarily suspend flights to Hong Kong while we review operational requirements for this route,” a spokesperson said.

A crew member from a different airline who was confined to the Penny Bay camp documented her stay, sharing pictures and videos from her Hong Kong quarantine quarters, a camp built of converted shipping containers.

I am currently in a Hong Kong quarantine facility. I was sent here with my flight crew after flying in from Frankfurt. Our post-flight PCR tests were negative but we are considered potential ‘close contacts’.

I need to stay in a container in Penny Bay Isolation Camp for 21 days.

Many of my colleagues are in this camp.

The accompanying video shows tiny rooms sparsely furnished with single beds covered in plastic, a bedside table, a table with a computer screen and a cramped and basic toilet and shower room.

It is perfectly understandable why airlines are reluctant to expose their crews to such an ordeal but it does mean that Hong Kong is now increasingly isolated from the Western world.

British Airways was one of the two main carriers from Europe to Hong Kong. The other main airline, Cathay Pacific has experienced similar quarantine problems for its crews.

LONDON (AP) — China, which is increasingly flexing its muscles around the world, is one of the biggest threats to Britain and its allies, and a … END_OF_DOCUMENT_TOKEN_TO_BE_REPLACED

The Left has spent decades telling us we need to be more like Europe. How to Make the US More Like … END_OF_DOCUMENT_TOKEN_TO_BE_REPLACED

Kyle Rittenhouse may have been found guilty of all charges in his recent trial in Kenosha, … END_OF_DOCUMENT_TOKEN_TO_BE_REPLACED

Firearms without serial numbers aren’t anything new. Once upon a time, guns weren’t even required to … END_OF_DOCUMENT_TOKEN_TO_BE_REPLACED

Yesterday was an absolute bombshell of a day for CNN’s Chris Cuomo, who has been lying since day one … END_OF_DOCUMENT_TOKEN_TO_BE_REPLACED