Some woke members of the military are publicly questioning their oaths of enlistment after the United States Supreme Court overturned Roe v. Wade in a recent court ruling.

One Army captain tweeted after the ruling came down, “I’m supposed to defend this country?” The tweet was later deleted. 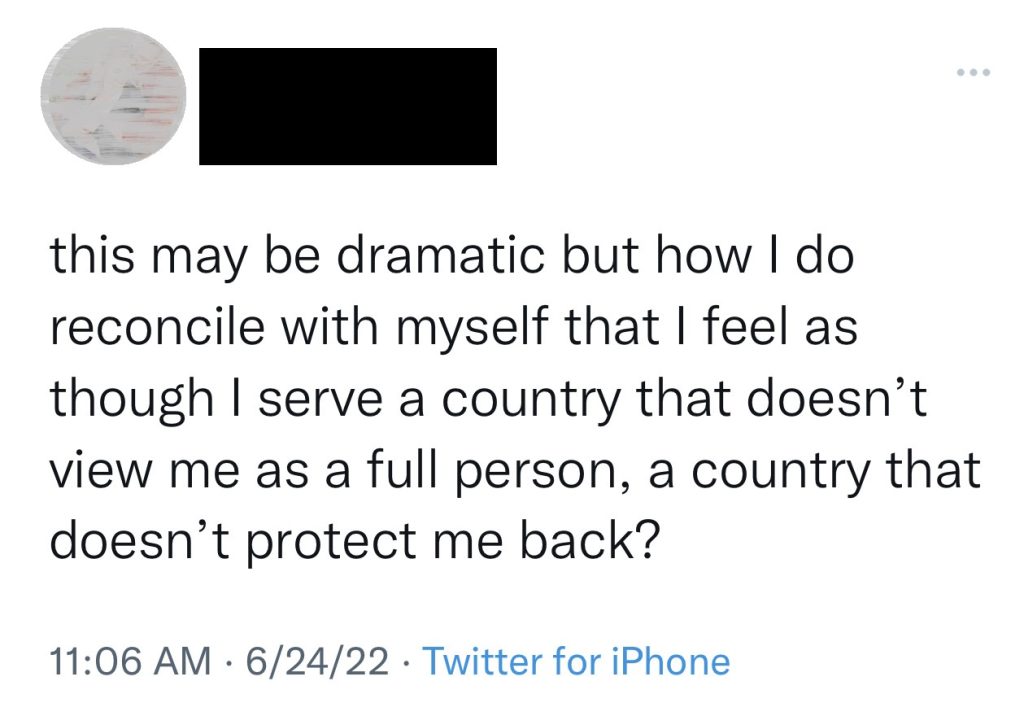 An Army medic with 4,940 followers on TikTok — whose bio read “My account absolutely reflects the [Department of Defense]” — posted a video in which she is shown first wearing her Army uniform and later civilian clothes, saying:

She tweeted the caption: “raw and unfiltered. I am heartbroken. I am enraged. I am terrified. #roevwade #scotusupdate #keepyourlawsoffmybody #deployment #armywomen #army #miltok”

She also tweeted that she was “embarrassed to put on my uniform.” 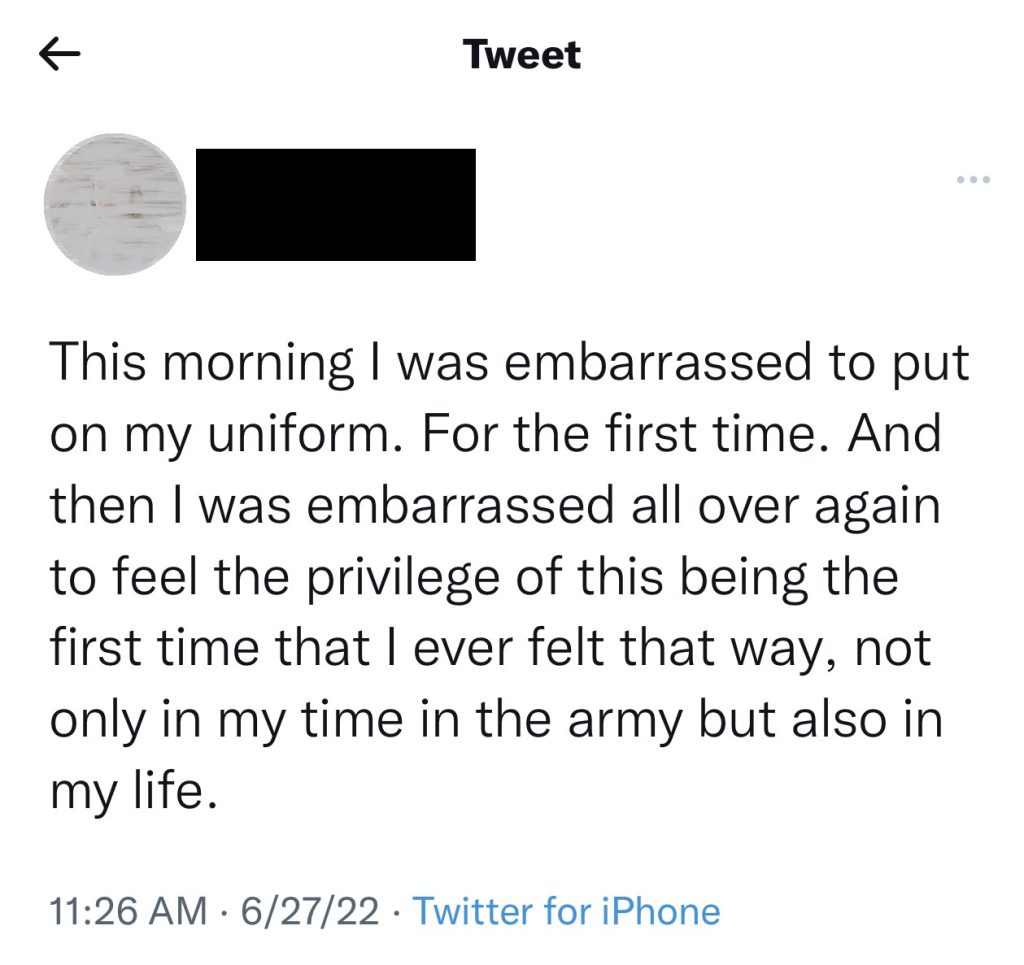 Retired Army Lt. Gen. Thomas Spoehr, the Heritage Foundation’s director of its Center for National Defense, said that while there is leeway on what service members can say online as long as they are not criticizing the commander in chief, superior officers, or crossing the line into subordination and disrespect, it is not a good idea to weigh in on political matters, particularly as an officer or as a non-commissioned officer.

“If you’re leading people and you’re out there very publicly with your political views, you run the risk of alienating people in your organization who have a different kind of view,” he said in an interview with Breitbart News on Thursday.

“When you’re in leadership, you know, you kind of held to a higher standard, you’re trying to command respect and loyalty of everybody underneath you. And so, you know, coming out with something which is liable to turn off or cause people you lead to question you, it is not probably a good leadership technique,” he added.

Defense Secretary Lloyd Austin himself waded into the politically charged topic, vowing to provide troops with access to abortions.

He released a statement that said, “Nothing is more important to me or to this Department than the health and well-being of our Service members, the civilian workforce and [Department of Defense] families. I am committed to taking care of our people and ensuring the readiness and resilience of our Force. The Department is examining this decision closely and evaluating our policies to ensure we continue to provide seamless access to reproductive health care as permitted by federal law.”

His statement inspired jubilation from some leftist groups, which claimed that the Pentagon would defy or ignore the Supreme Court decision.

The socialist Occupy Democrats tweeted: “BREAKING NEWS: President Biden’s Pentagon defies the extremist Supreme Court, announces that it will not recognize any anti-abortion laws enacted by the states as a result of the Supreme Court’s decision. RT IF YOU SUPPORT THE PENTAGON’S DECISION.”

BREAKING NEWS: President Biden’s Pentagon defies the extremist Supreme Court, announces that it will not recognize any anti-abortion laws enacted by states as a result of the Supreme Court’s decision. RT IF YOU SUPPORT THE PENTAGON’S DECISION!

Clearly, Defense Secretary Lloyd Austin’s allegiance — he all but said it with his disgraceful “Nothing is more important to me” comment — is to the Biden White House and the Democrat Party, and the radical left, all of which are doing their damnedest to destroy America as we know it, not to the military strength and combat readiness of America’s Armed Forces.

On Tuesday, Under Secretary of Defense for Personnel and Readiness Gilbert Cisneros tried to clarify the DOD’s policy, sending out a memo that said the current federal law still applies.

Currently, under 10 U.S.C. §1093, military medical facilities and funds available to the DOD may not be used to perform abortions, except where the life of the mother is in danger or in the case of rape or incest. DOD healthcare only covers abortion in those cases. Troops may seek abortions at non-military facilities in other cases, however. With the new ruling, they may have to travel out of state if the state where their base is located bans abortion.

Cisneros emphasized in his memo, however, that existing Department policy authorizes active duty service members to travel as necessary to receive abortion care “either as Government-funded, official travel for a covered abortion, or at the Service member’s own expense on regular leave for all other cases.”

“Access to emergency or convalescent leave remains unchanged for all Service members,” he added.

Spoehr said while the defense secretary is a political appointee and does not have to be apolitical, Austin’s statement could have been worded differently.

He said Austin was essentially affirming that the current law — which allows the DOD to provide abortions in extremely limited circumstances — would stand, but “he could have used different words” that would have proved less contentious.

“They could have said, ‘We will abide by…’ or something like that, and it would have gotten completely out this political discussion,” he said. “That would have been a safer thing to say, I think, rather than kind of dipping his toe in the political waters.”

Spoehr said the perception that the Biden Pentagon is wading into “wokeness” is hurting recruitment at a time of historic recruiting challenges.

For the first time in history, the Army announced earlier this year that it would reduce its size due to recruiting difficulties, and with only three months left to go in the fiscal year, the Army has only met 40% of its recruitment goal.

“The White House in particular is pushing a number of policies, which kind of suggest to Americans that [the military is] becoming woke, pushing policies which favor progressive policy over military readiness,” Spoehr said.

“At the same time you don’t hear much discussion about military readiness, but you hear about policies and whether it’s completely accurate or not, the average American gets that sense when they read these stories that the military is becoming politicized. And I think that’s not helpful for the military and particularly not helpful for the recruiting crisis,” he added.

“Military recruitment has been on a knife edge for the last few years. … The tight labor market right now makes things harder. And that this idea of a politicized military increasing military civilian divide, I think pushes it into the red zone,” he said.

In a statement responding to the Supreme Court’s move to strike down Roe v. Wade, Defense Secretary Lloyd Austin declared that the Department of Defense is assessing its policies to make sure it keeps providing “seamless access to reproductive health care as permitted by federal law.”

“Nothing is more important to me or to this Department than the health and well-being of our Service members, the civilian workforce and DOD families,” Austin said in a statement. “I am committed to taking care of our people and ensuring the readiness and resilience of our Force. The Department is examining this decision closely and evaluating our policies to ensure we continue to provide seamless access to reproductive health care as permitted by federal law.”


u201cThe Department is examining this decision closely and evaluating our policies to ensure we continue to provide seamless access to reproductive health care as permitted by federal law.u201d

A previously leaked draft opinion had revealed that the high court was poised to reject Roe, and last month, liberal lawmakers urged Austin to ensure that service members would be able to travel to get abortions if the high court issued such a ruling.

“If the opinion goes into effect, hundreds of thousands of troops, dependents, and DOD civilians will lose access to safe abortions and potentially face criminal prosecution for exercising a fundamental human right—creating a scenario where servicemembers’ reproductive and healthcare rights would become dependent on their duty station,” the senators said in the letter.

“At a minimum, you and your staff should consider implementing policy changes to allow servicemembers to obtain, for example, special liberty or permissive temporary additional duty permissions in order to travel out of state for reproductive healthcare and abortions if they are stationed in a jurisdiction that curtails these rights after the Dobbs decision is issued,” the lawmakers declared.

While the ruling represents a tremendous victory for the pro-life movement, Democrats have been in an uproar, with many claiming that the decision marks a “dark day” for the country.

‘Zackly. What could possibly go wrong? Moreover, it’s not like some of us haven’t predicted it from the very beginning. TikTok, the popular … END_OF_DOCUMENT_TOKEN_TO_BE_REPLACED

The New York Times reports that police are seeking a 22-year-old white man in connection with the July 4 Highland Park attack. The individual is … END_OF_DOCUMENT_TOKEN_TO_BE_REPLACED

We’ve seen a lot of the left losing their minds over the Supreme Court’s decision to overturn Roe v. Wade while Democratic lawmakers have done all … END_OF_DOCUMENT_TOKEN_TO_BE_REPLACED

It’s difficult to be impressed by anything the Biden-Harris Administration is up to these days, but … END_OF_DOCUMENT_TOKEN_TO_BE_REPLACED

There are 91 U.S. military veterans in the 117th Congress: 17 serve in the Senate, 74 serve in the … END_OF_DOCUMENT_TOKEN_TO_BE_REPLACED

Happy Independence Day, Americans! On today’s podcast, I talk about one of the greatest recent … END_OF_DOCUMENT_TOKEN_TO_BE_REPLACED

Progressives accuse conservatives of single-handedly killing American democracy. And unless you are … END_OF_DOCUMENT_TOKEN_TO_BE_REPLACED