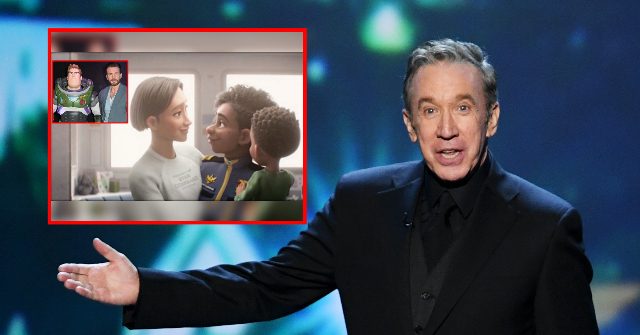 Tim Allen slammed Disney’s box office bomb Lightyear after he was replaced with actor Chris Evans. “It has no relationship to Buzz,” Allen said. The Disney-Pixar film ended up flopping in its opening weekend.

“I’ve stayed out of this,” Allen, who had previously voiced Buzz in all four of the original Toy Story films, told told Extra. “We talked about this many years ago — but the brass that did the first four movies is not this, it’s a whole new team that really had nothing to do with the first movies.”
Watch Below:

Allen went on to say that “there’s really no ‘Toy Story’ Buzz without Woody,” referring to how there is no Woody character in the 2022 Lightyear film.

Not everyone agreed with the film’s casting, such as actress Patricia Heaton, who blasted Disney-Pixar over its decision to replace Allen with Evans, asking “Why would they completely castrate” the Buzz Lightyear character?

Some Toy Story fans speculated whether Allen was replaced with Evans due to his conservative beliefs.

“You’ve gotta be real careful around here. You get beat up if you don’t believe what everybody believes,” Allen said in 2017 of being a conservative in Hollywood.

As for Lightyear, the film flopped during its first opening weekend in theaters, taking a record dive at the box office.
The movie was also banned in Middle Eastern countries, such as Saudi Arabia and the United Arab Emirates (UAE), over a scene featuring a kiss between two female characters.

After opening to a disastrous $51 million, in its second weekend, the Disney film earned just $17.7 million, which is a crash of 65 percent.

Evans reacted to those who took offense to the gay kiss, proclaiming, “those people are idiots,” adding, “There’s always going to be people who are afraid and unaware and trying to hold on to what was before. But those people die off like dinosaurs.”

Welcome back. Let’s do a roundup of what the situation looks like 128 days into Vladimir Putin’s 72-hour Special Military Operation against … END_OF_DOCUMENT_TOKEN_TO_BE_REPLACED

Does Joe Biden care about struggling Americans who are watching their paychecks disappear at the pump? On CNN, such a question was put to Biden … END_OF_DOCUMENT_TOKEN_TO_BE_REPLACED

With the overturning of Roe v. Wade and the nuking of the non-existent “constitutional right” to … END_OF_DOCUMENT_TOKEN_TO_BE_REPLACED

In our modern era, everything is political. Case in point: the Bank of Scotland’s Halifax bank. … END_OF_DOCUMENT_TOKEN_TO_BE_REPLACED