Ford is increasing the starting prices of its electric F-150 Lightning truck by as much as $8,500 due to “significant material cost increases and other factors.”

CNBC reports that Ford said on Tuesday that it would be increasing the starting prices of its electric F-150 Lightning pickup truck due to “significant material cost increases and other factors.” The automaker said that the price increases, which are between $6,000 and $8,500, will not impact customers who have already ordered the vehicle and are awaiting delivery. President Joe Biden infamously test drove an electric F-150 in 2021. Biden shared his opinion on the truck, saying ““This sucker’s quick.” 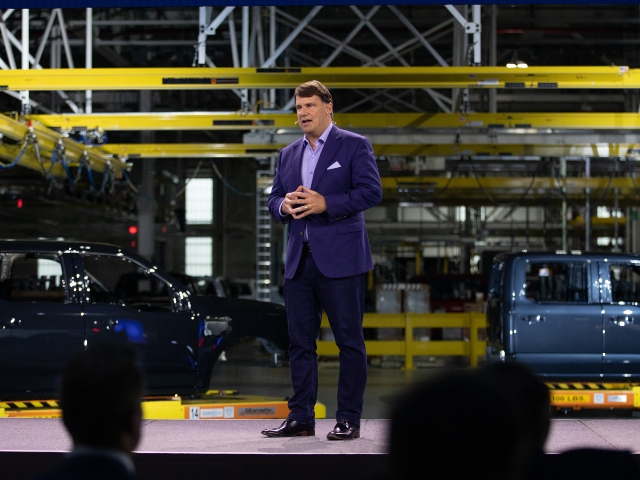 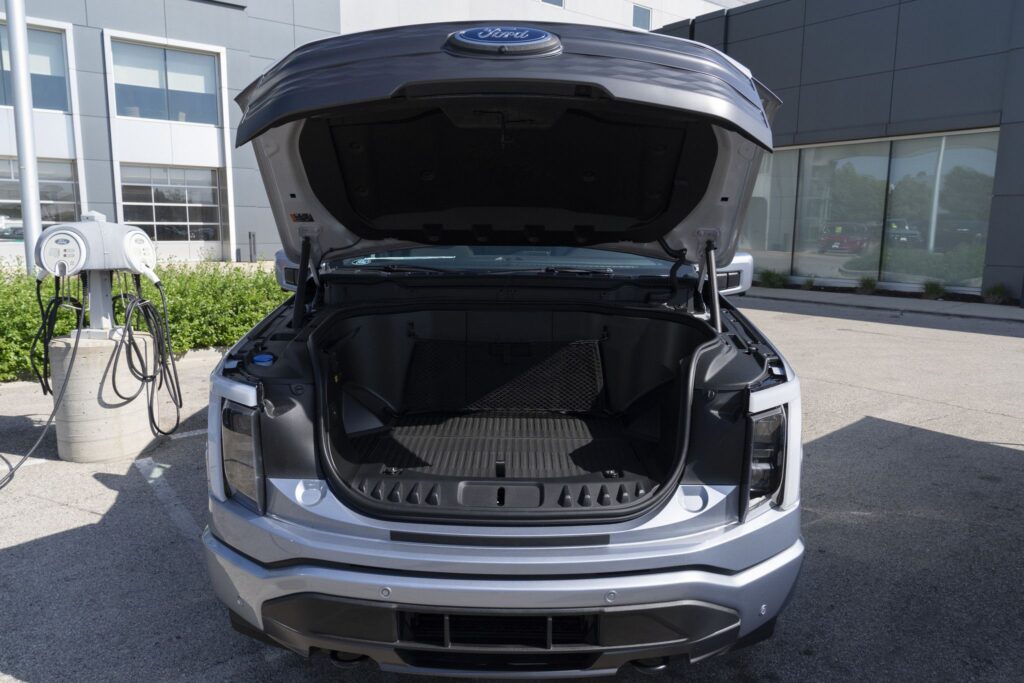 In the front of the F-150, where the engine would be, is a large, easy-access storage trunk, commonly referred to as a frunk. (Youngrae Kim/Chicago Tribune/Tribune News Service via Getty Images)

The 2023 F-150 Lightning will now range from $47,000 to $97,000, up from approximately $40,000 to $92,000 for the 2022 model. Ford is the latest in a long line of automakers increasing the prices of their electric vehicles amid rising inflation and development costs. General Motors raised the price of its Hummer EV by $6,250, EV startups Rivian Automotive and Lucid also increased the cost of their vehicles. Tesla increased the price of all models earlier this year.

During the coronavirus pandemic, the cost of raw materials used to develop batteries for electric vehicles doubled according to a report by the consulting and research firm AlixPartners. Ford’s price increase comes ahead of the automaker reopening order for the F-150 Lightning on Thursday.

Far from discussing price increases, Ford CEO Jim Farley recently stated that he believes that the electric car market is about to enter an intense price war as more affordable models become available. Due to production issues and strong demand, there is nothing close to a price war in the EV market, but Farley believes that is likely to change soon.

“So I believe there will be, our industry is definitely heading to a huge price war,” said Farley. He noted that the Mustang Mach-E battery pack alone costs Ford $18,000 to build, a production price that he hopes to lower in coming years.

“Half the fixtures, half the work stations, half the welds, 20% less fasteners. We designed it, because it’s such a simple product, to radically change the manufacturability,” said Farley.

Despite Farley’s enthusiasm for the Mustang Mach-E, Ford was forced to temporarily halt sales of the vehicle due to a safety defect that impacted about half of all Mach-E vehicles that it had produced.

Lucas Nolan is a reporter for Breitbart News covering issues of free speech and online censorship. Follow him on Twitter @LucasNolan

Slowing business growth and economic recession fears are forcing corporations to find cost-cutting solutions. As a result, the summer of 2022 has become the season of massive nationwide job cuts.

Robinhood, a California-based financial service company, is the latest organization to announce staff cuts. On Tuesday, Robinhood reported that it would be slashing an additional 23% of its workforce. In April, the company laid off 9% of its staff.

CEO Vlad Tenev blamed rising inflation and a drop in user activity. Customers of Robinhood use the platform to buy and sell stocks, but Americans have reduced their trading activity because of recession fears.

Vlad stated in a press release on Tuesday that since the layoffs in April, “we have seen additional deterioration of the macro environment, with inflation at 40-year highs accompanied by a broad crypto market crash. This has further reduced customer trading activity and assets under custody.”

Oracle, a computer technology firm, has also started laying off staff on its marketing, sales, and customer experience teams. While Oracle has not reported the total number of staff it plans to let go, the Independent speculated that it could be thousands.

Shopify was another big name that reduced its workforce. In July, the company dropped 10% of its staff. The CEO of Shopify, Tobi Lutke, explained that the company had previously hired too many people to handle the increase in online shopping activity but that the demand had since slowed.

Ford Motor Co. announced last month that it would focus its efforts on building an electric vehicle fleet. The car manufacturer reported that 8,000 jobs would be cut from its combustion engine automobile division and the funds would be reallocated to electric vehicle production.

Carvana was one of the first companies this summer to reduce its staff. The online car retailer laid off 12% of its workers in May. Tesla followed in July by removing 229 employees from its team.

CEOs everywhere are bracing for an economic recession. Economists at S&P Global Ratings predicted a 2.4% decline in the gross domestic product (GDP) by the end of the year. The Department of Labor reported that 244,000 people filed for unemployment last week, the highest number of applicants in eight months.

Our weekly recognition of less-than-meritorious excellence in journalism worthy of a skewed version of Pulitzer Prize consideration. As an extension … END_OF_DOCUMENT_TOKEN_TO_BE_REPLACED

The left has hated Rep. Liz Cheney (R-WY) and her father, former Vice President Dick Cheney, for years. Some still do and are furious that the … END_OF_DOCUMENT_TOKEN_TO_BE_REPLACED

History be damned, there has to be hatred with a centuries-old flag representing libertarian … END_OF_DOCUMENT_TOKEN_TO_BE_REPLACED

History be damned, there has to be hatred with a centuries-old flag representing libertarian … END_OF_DOCUMENT_TOKEN_TO_BE_REPLACED

It’s only a week, but already there seems to be a ton of questions about the FBI raid against … END_OF_DOCUMENT_TOKEN_TO_BE_REPLACED

Let’s put ourselves in the shoes of the congressional Democrats for a moment. I know — but just for … END_OF_DOCUMENT_TOKEN_TO_BE_REPLACED

A man shot himself after crashing his car into a barricade near the U.S. Capitol building early … END_OF_DOCUMENT_TOKEN_TO_BE_REPLACED