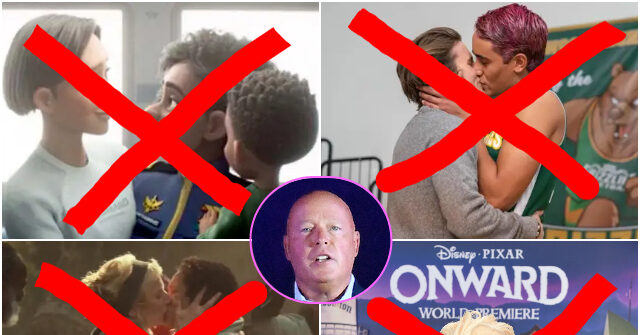 After picking a political fight with Florida over the state’s Parental Rights in Education Law, and declaring itself an LGBTQ ally to boot, Disney is reportedly censoring gay and transgender content on the version of the Disney+ streaming service that it launched in the region in June.

Among the titles that won’t stream are the animated movie Lightyear, which features a lesbian kiss, and the Baymax series, which has a transgender “man” who menstruates.

“Content offerings differ across our many Disney+ markets, based upon a number of factors. Content available should align with local regulatory requirements,” the studio said.

The UAE already banned Lightyear from showing in local cinemas.

This year, Disney CEO Bob Chapek declared the company will be a staunch ally of the LGBTQ community. He said Disney will continue to fight Florida’s Parental Rights in Education Law, which forbids the teaching of sexuality and gender ideology — including transgenderism — to children in kindergarten through third grade.

Statement from The Walt Disney Company on signing of Florida legislation: pic.twitter.com/UVI7Ko3aKS

Disney used the Democrat slogan “Don’t Say Gay” when referring to the Florida law in a statement in March.

“Our goal as a company is for this law to be repealed by the legislature or struck down in the courts,” the company said.

July was a long month, but “Louder with Crowder” is finally back from its annual hiatus, and the fans are ecstatic. Steven Crowder kicked things off by recapping news stories from Crowderless July.

Listen to the podcast here.

Crowder channeled his inner Billy Joel and with the help of comedian Dave Landau sang the news to the tune of Billy Joel’s 1989 hit “We Didn’t Start the Fire.”

Hey they just found the cure for AIDS.

In this clip, Crowder addressed the state emergency declared for the monkeypox outbreak as well as the guidelines issued by the World Health Organization. Steven shared one trick men can use to avoid getting monkeypox.

Rather than learning economics, President Joe Biden and all the radical leftists appeared totally fine with changing the meaning of the term “recession” so they don’t have to admit that we are in one.

Steven explained that the labor market sucks, but the whole story is more about the Biden administration gaslighting the American people. A recession occurs when there are two consecutive quarters of negative GDP growth. But the Biden administration insists that a recession is when there are three consecutive quarters of negative GDP growth.

Crowder concluded that Democrats appear to think Americans are the idiots.

Demi Lovato has been very open about her mental illness. She has been more open about her sexual preferences as well as her gender pronouns. Lovato made her way into the public eye as a child when she was thrust before the alter of Disney as a child actor who in the recent past changed her pronouns to they/them.

Here’s the thing: When a public figure has an audience of 130-million impressionable children watching their every move, there is a sense of responsibility that comes along with it. Life is confusing as it is, why add your confusion to the pile of confusion that accompanies adolescence? Lovato now goes by they/them/she/her. Celebrities should stick to what the thing that made them famous.

Here are some tweets from Mug Club members and fans who are happy Crowder is back to making News coverage great again:

To enjoy more of Steven’s uncensored late-night comedy that’s actually funny, join Mug Club — the only place for all of Crowder uncensored and on demand.

On Monday, the Michigan Association of Public School Academies and the Thomas B. Fordham Institute of Ohio filed a complaint against the Biden … END_OF_DOCUMENT_TOKEN_TO_BE_REPLACED

Apple has reportedly told suppliers based in the Republic of Taiwan to comply with Chinese customs regulations, citing fears of trade barriers … END_OF_DOCUMENT_TOKEN_TO_BE_REPLACED

While most of the allegations of corruption surrounding the FBI’s raid of Donald Trump’s estate in Florida have been pointed at the bureau itself, … END_OF_DOCUMENT_TOKEN_TO_BE_REPLACED

I’ve often talked about the animosity many in the gun community feel toward the ATF. It’s a real … END_OF_DOCUMENT_TOKEN_TO_BE_REPLACED