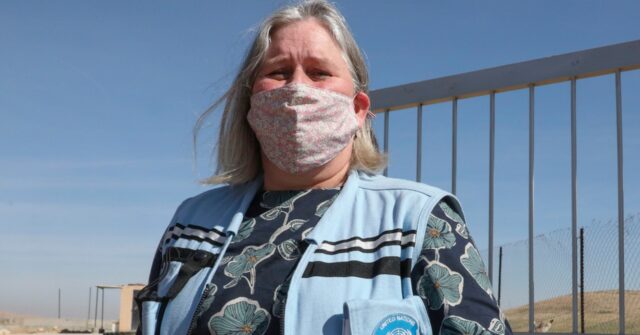 The head of a U.N. office tasked with Palestinian aid has been fired after posting a tweet condemning Gaza terrorist rocket fire in the wake of Israel’s conflict with the Islamic Jihad terror group.

Sarah Muscroft (pictured), who served as head of Office for the Coordination of Humanitarian Affairs (OCHA) in the “Occupied Palestinian Territory” for over three years, prompted outrage from Palestinians and U.N. officials after a tweet hailing the ceasefire.

“Such indiscriminate rocket fire of Islamic Jihad provoking Israeli retaliation is condemned. The safety of all civilians is paramount — the ceasefire must be upheld.”

The Hamas terror group, which rules Gaza, issued and then revoked sweeping restrictions on foreign journalists working there and covering the recent conflict with Israel. https://t.co/zsiNnWm9s1

Following a backlash, Muscroft deleted her initial tweet and apologized, writing: “One of my previous tweets was ill-informed and I have deleted it. I sincerely apologize for my poor judgment. All civilians – everywhere – must be able to live in peace.”

Apparently that wasn’t enough to satisfy the rocket-loving pro-Palestinian public, as well as the U.N. itself, and Muscroft was forced to delete her account completely.

That too clearly wasn’t enough, and soon after a U.N. official announced that she would be removed from her post altogether and reassigned.

“Instead of supporting Muscroft, the UN effectively threw her under the bus, by capitulating to the terrorists and the anti-Israel activists, by forcing her to make an apology and then re-assigning her to a new role,” Arsen Ostrovsky, human rights attorney and CEO of The International Legal Forum, which first exposed the story, told Breitbart.

“The U.N., who are supposed to be impartial, never call out or reprimand their people when they criticize and attack Israel, yet they only do so when an official has the basic courage and decency to speak the truth and challenge the lies of Islamic Jihad and Hamas,” he said, of the Gaza-ruling terrorist group.

The U.N. Security Council on Monday convened an emergency session on the escalation in Gaza, even though it had already ended with a ceasefire the night before. During that session, a veritable Israel hate-fest unfolded, with several envoys slamming Israel for civilian casualties in Gaza.

More Palestinians died in the recent conflict between Israel and Gaza by botched rocket launches by Gaza terrorists than from Israel Air Force strikes. https://t.co/NeQjtKIT84

Although her office is largely critical of Israel, Muscroft used the platform to tell the truth about the “indiscriminate” rocket fire.

Her colleague at the U.N. Special Coordinator for the Middle East Peace Process Tor Wennesland, condemned the rocket fire but seemed to blame Israel for the deaths of Palestinian children.

“I reiterate that under international law, all use of force must be proportionate and take all feasible steps to avoid civilian casualties. Children, in particular, must never be the target of violence or put in harm’s way,” he said.

Roughly 200 of the rockets were misfired by the terrorists, and landed inside the Gaza Strip, killing young children.

The U.N. has a track record of removing officials from their posts on the rare occasion they call out Palestinian terrorists.

The head of the United Nations Relief and Works Agency (UNRWA), Matthias Schmale, was forced to leave Gaza after he told Israel’s Channel 12 last year that the IDF used “huge sophistication” in targeting terrorists only and avoiding civilian casualties. The “pro-Israel” remark prompted rolling protests in Gaza, and Schmale received death threats.

He apologized for telling the truth but it wasn’t enough. Schmale was forced to leave Gaza for Jerusalem and six months later, left his post as the head of Palestinian refugees.

During the trial for R. Kelly on child pornography and obstruction of justice charges, a woman claimed that the R&B singer had sex with her … END_OF_DOCUMENT_TOKEN_TO_BE_REPLACED

The United Kingdom has some of the toughest gun control laws in the world. They’re not the toughest, but close to it. Yet despite all those … END_OF_DOCUMENT_TOKEN_TO_BE_REPLACED

An atheist podcast known for criticizing Christianity and Islam responded to a social media furor over his comments, arguing that the media should … END_OF_DOCUMENT_TOKEN_TO_BE_REPLACED

Grab the popcorn, America, stuff just got really interesting. Top aides of former President Donald Trump have suspected from the beginning that the … END_OF_DOCUMENT_TOKEN_TO_BE_REPLACED

Ahead of the passage of the $700 billion Inflation Reduction Act, Ford Motor Company and General … END_OF_DOCUMENT_TOKEN_TO_BE_REPLACED