Alexandra Pierce, founder and designer of HRH Collection, says it was only a matter of time before Starbucks started closing stores across Los Angeles, California, as a result of its woke agenda.

In an exclusive interview with Breitbart News Editor-in-Chief Alex Marlow on SiriusXM Patriot’s Breitbart News Daily, Pierce detailed how Starbucks is spurring its own demise due to policies such as allowing individuals to loiter in its stores without buying anything and opening bathrooms to the public.

“It’s horrible but it was bound to happen,” Pierce said of Starbucks’s announcement last month that it would close 16 stores including six in Los Angeles and six in Seattle, Washington because of safety concerns.

“I remember the first Starbucks opened up near my office, I was so happy — this was like eight years ago — because we didn’t have any Starbucks in downtown [Los Angeles] at the time,” Pierce said.

“So I called Starbucks up … and said ‘Can we do something about this? I really want this Starbucks to last, it’s disgusting, the homeless are starting to ruin it.’ And they were like ‘Well, we have to remember that everyone’s human.’ I was like ‘What? What does this have to do with anything?’” Pierce said. “And I remember people being like ‘Who cares if they steal the half and half?’ What do you mean ‘Who cares?’ First of all, prices are going to rise, the place is going to close down … and sure enough, now, Starbucks in Los Angeles is closing. And I was right.” 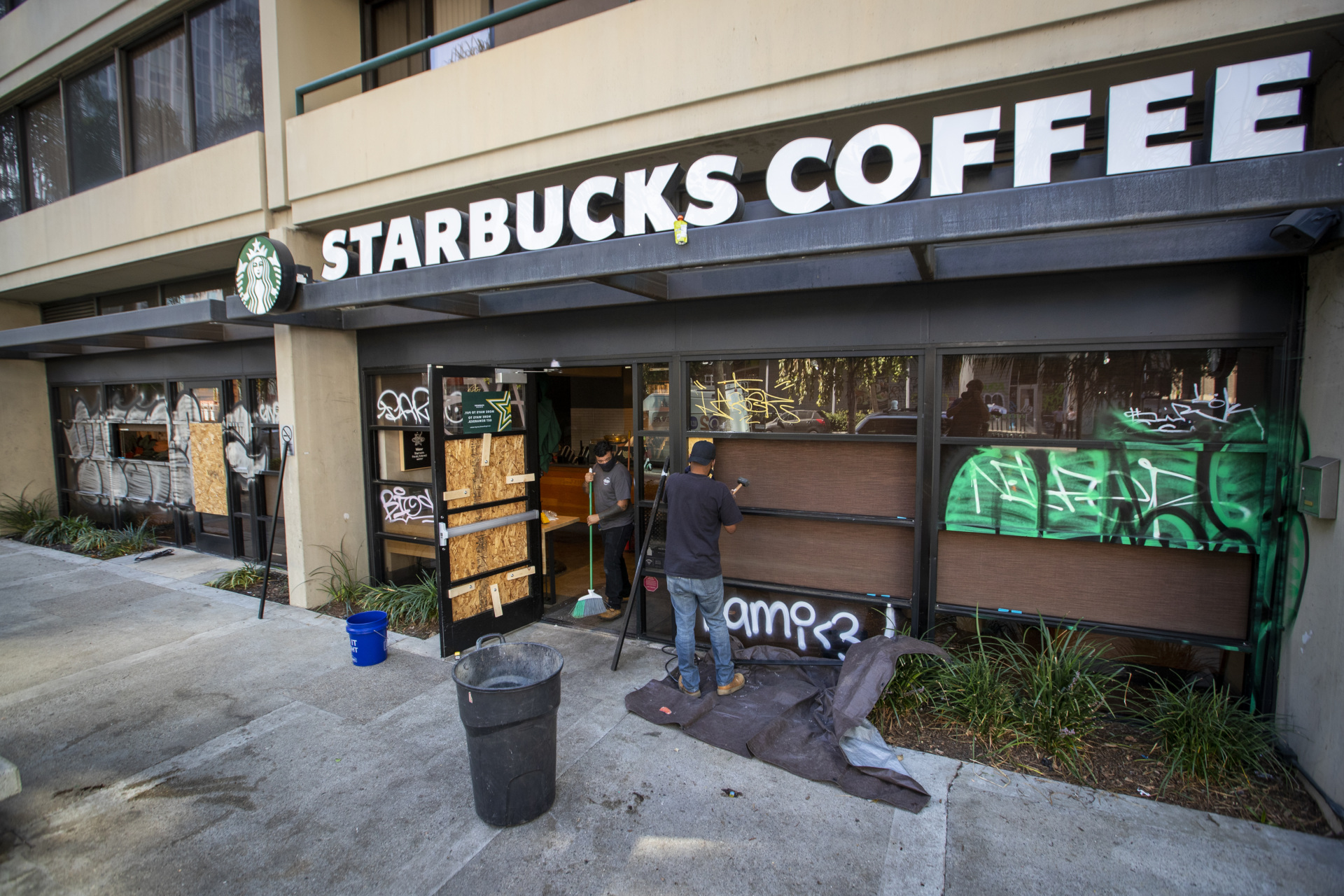 Starbucks Coffee workers clean up broken glass and replace several shattered windows when some Lakers vandals took to the streets and covered several blocks with graffiti, broke windows and vandalized businesses after their championship win the night before on Monday, Oct. 12, 2020 in Los Angeles, CA. (Allen J. Schaben/Los Angeles Times via Getty Images)

Online, Pierce is known as “HRH” mostly from her famous rants on YouTube that eventually go viral across social media. Pierce said the rants started because she “couldn’t stand” being silent about “the woke crap” any longer.

“I just started calling out the BS,” Pierce said.

“I never spoke about politics before, I never talked about woke people, I had a huge gay following who loved me,” she said. “I would never want to offend my customers but they agree with me too. People are sick of the woke crap.”

Pierce said she lived in the Los Angeles neighborhood of Brentwood until the Chinese coronavirus crisis hit. Economic lockdowns, mandatory public masking, homelessness, and crime, Pierce said, drove her out of the area.

“I had a cute little house right on Sunset Boulevard, a cute little bungalow from like the 1950s original — so cute. I loved it so much,” Pierce said. “And then there was like homeless starting to come and crap in my front yard. There were tent cities that popped up down the street from me.”

“I would go to the … grocery mart and these woke women, if you literally did not stay six feet away from them with a mask on, they would turn you into security,” she continued. “… When the pandemic hit, it’s like they came out in like armies. I didn’t want to live around that anymore. It wasn’t comfortable, there were homeless everywhere, and I was like, ‘Why am I here? Why am I paying to live in this squalor?’”

Much of the recent crime wave can be credited to Los Angeles District Attorney George Gascón who was propelled to victory in 2020 with the help of billionaire George Soros. 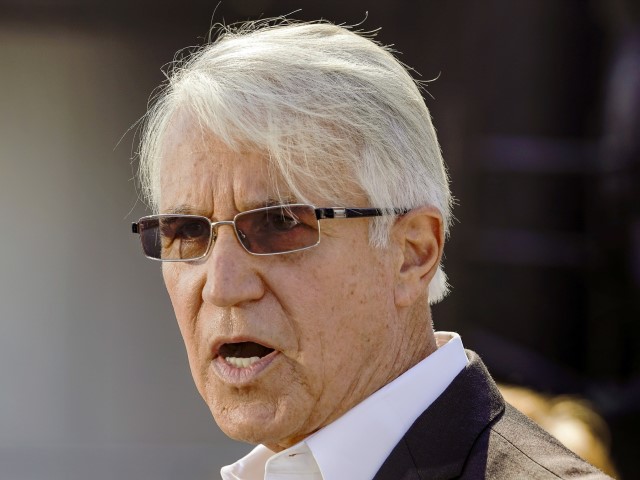 Gascón immediately eliminated cash bail for misdemeanor crimes as well as those considered “non-serious” and “non-violent” and barred city prosecutors from seeking the death penalty in all new cases. Most recently, Gascón asked a court to reverse the death penalty for a man convicted of murdering two innocent college students.

This week, the effort to recall Gascón failed. Pierce, though, said Los Angeles voters should “deal with the consequences” of electing Gascón despite his promise to carry out an expansive jailbreak agenda.

“I’m happy about it. Let Los Angeles burn,” Pierce said of the failed recall against Gascón.

“We say that Soros is the person who put him in here. … Well, all of the left-wing voting has gotten Soros and all this money that’s backing Gascón there in the first place so you know what, no — your voting has done this,” she continued. “… I didn’t sign [the petition] because this is what you guys voted in, now deal with it.”

The Breitbart News Daily Podcast runs Monday through Friday as a “Director’s Cut” of the SXM Patriot radio show.

Joe Biden’s Chief of Staff, Ron Klain, is pretty confident that the Biden administration and the Democratic Party as a whole will have enough … END_OF_DOCUMENT_TOKEN_TO_BE_REPLACED

EAGLE PASS, Texas — For one Texas ranch manager, dealing with the daily trespasses of migrants through the property is becoming almost unbearable. Ben … END_OF_DOCUMENT_TOKEN_TO_BE_REPLACED

Thursday on MSNBC’s “The ReidOut,” network host Tiffany Cross warned that “a civil war is here” amid violent rhetoric regarding the FBI. Cross … END_OF_DOCUMENT_TOKEN_TO_BE_REPLACED

There is no shortage of “anti-racism” grifters. The author of “White Fragility,” Robin DiAngelo tops … END_OF_DOCUMENT_TOKEN_TO_BE_REPLACED

A federal judge has already granted an injunction blocking the town of Superior, Colorado’s … END_OF_DOCUMENT_TOKEN_TO_BE_REPLACED

According to a Rasmussen poll published on Thursday, 53% of voters now agree with the statement that … END_OF_DOCUMENT_TOKEN_TO_BE_REPLACED

Note: This “Moore to the Point” commentary aired on NewsTalkSTL on Friday, August 19th. Audio … END_OF_DOCUMENT_TOKEN_TO_BE_REPLACED

The school shooting in Uvalde, TXs shook the nation to its core. It’s unsurprising, though. We … END_OF_DOCUMENT_TOKEN_TO_BE_REPLACED