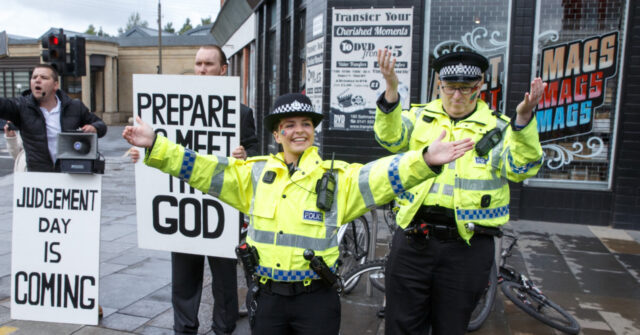 With a dismal number of burglaries and theft actually resulting in criminal charges, an official police watchdog has declared that Britain’s increasingly woke forces have failed the public.

A report from Her Majesty’s Chief Inspector of Constabulary, Andy Cooke, found there was an “unacceptable and unsustainable” rate of solving thefts or burglaries by police forces throughout the country, with Home Office figures showing just 6.3 per cent of domestic burglaries and four per cent of thefts resulted in criminal charges.

The report found that in 71 per cent of burglary cases victims were not even provided with any advice on how to preserve evidence during their initial call to police.

It went on to say that there was a failure among police forces in carrying out basic investigative work, such as collecting CCTV evidence or going door-to-door to conduct inquiries. The watchdog blamed a lack of experience among detectives as well as poor supervision from those with experience for the escalating failures.

“Burglary, robbery and theft are not minor crimes. They are crimes that strike at the heart of how safe people feel in their own homes or communities,” Mr Cooke said per Sky News.

“The current low charge rates for these crimes are unacceptable and unsustainable — there needs to be a concerted drive to address this issue because it directly affects the public’s confidence in the police’s ability to keep them safe.

“In order for people to have confidence and trust in policing, they need to see visible action in their own communities. They need to see the police actively engaging and also actively investigating offences that matter to them on a daily basis.”

Over the past month, police forces have come under harsh criticism for devoting precious man-hours to policing supposedly offensive content online, rather than focusing on proper crimes.

In July, Reclaim Party leader Laurence Fox released footage on social media of an unnamed veteran being arrested for sharing a meme on Facebook by the Hampshire Constabulary.

The meme in question displayed four Progress Pride flags together in order to form a swastika, in apparent mockery the authoritarian woke movement in Britain. For sharing the picture, the veteran was cuffed outside his home by multiple officers and arrested because “someone was offended”.

Just days prior, feminist campaigner Posie Parker revealed that police had doorstepped her for allegedly being “untoward about pedophiles” in one of her YouTube videos.

The actions from the two police forces came less than a week after the College of Policing issued national guidance which said that officers should focus on crimes such as burglaries rather than intervening in “debates on Twitter”.

In response to the report from the police watchdog, National Police Chiefs’ Council acquisitive crime lead Deputy Chief Constable Amanda Blakeman claimed they would study the recommendations “and work to assist forces in implementing improvements”.

“We absolutely recognise how invasive and traumatic it is to be a victim of these serious offences,” she added.

“Only by taking a consistent approach will we fully protect the public and not let burglars off the hook.”

Crowder felt conflicted between his feelings of anger at the FBI raid on Trump’s Mar-a-Lago home and making the FBI’s actions his hill to die on. “Not literally,” Crowder clarified, “but it is time to fight fire with fire.”

Crowder made it very clear his belief that it is time to stop playing the losing game of passively allowing agencies like the IRS and the FBI to violate and betray the American people for job security. “There is a reason you feel scared,” Crowder explained. “These agencies are coming for you.”

The mainstream media are ruled by jacked-up priorities, aka lies, and lost their minds over a tweet Crowder posted the night before. The tweet read: “Tomorrow is war. Sleep well.” The progressive media pounced and accused Crowder of calling for an actual war because that is what they do when they feel scared: attempt to destroy their opponents with lies.

To enjoy more of Steven’s uncensored late-night comedy that’s funny, join Mug Club — the only place for all of Crowder uncensored and on demand.

More from the show

Days after House Speaker Nancy Pelosi enraged Chinese officials with a trip to Taiwan, a congressional delegation made an unannounced two-day visit of … END_OF_DOCUMENT_TOKEN_TO_BE_REPLACED

Welp, now it’s getting really interesting, America. “It,” of course, being the FBI raid on Donald and Melania Trump’s private residence at Mar-a-Lago. … END_OF_DOCUMENT_TOKEN_TO_BE_REPLACED

Levi Strauss & Co. heir Dan Goldman has reportedly thrown millions of dollars from his own … END_OF_DOCUMENT_TOKEN_TO_BE_REPLACED

EAGLE PASS, Texas — Within the course of a few short hours, nearly 700 migrants waded across the Rio … END_OF_DOCUMENT_TOKEN_TO_BE_REPLACED

President Joe Biden rode his bike in front of reporters again on Sunday, this time peddling along … END_OF_DOCUMENT_TOKEN_TO_BE_REPLACED

I remember asking early on in the pandemic, “if masks and lockdowns work so well, why aren’t they, … END_OF_DOCUMENT_TOKEN_TO_BE_REPLACED

The older brother of a U.S. Marine who was killed during the tumultuous U.S. withdrawal from … END_OF_DOCUMENT_TOKEN_TO_BE_REPLACED

One person is dead, and 17 others are injured after a driver crashed his vehicle into a crowd of … END_OF_DOCUMENT_TOKEN_TO_BE_REPLACED