Officials within the administration of leftist President Joe Biden have not confirmed al-Zawahiri’s death on the record at press time, but multiple outlets have cited unnamed sources as confirming that the successful operation occurred Sunday.

“Current and former officials began hearing Sunday afternoon that al-Zawahri had been killed in a drone strike, but the administration delayed releasing the information until his death could be confirmed, according to one person, who spoke on the condition of anonymity to discuss the matter,” according to the Associated Press.

“Over the weekend, the United States conducted a counterterrorism operation against a significant Al Qaeda target in Afghanistan. The operation was successful and there were no civilian casualties,” a senior administration official said.

The president will reportedly be delivering his remarks from the Blue Room Balcony of the White House due to his recent bout with the coronavirus. 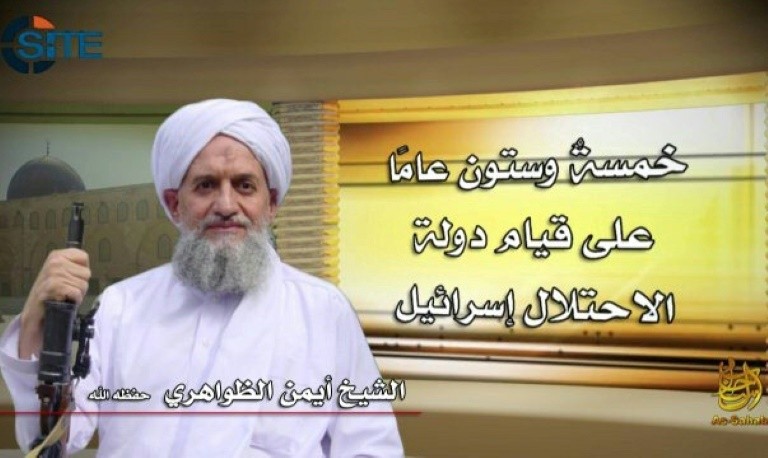 Zawahiri calls for jihad on eve of US embassy move to Jerusalem. (SITE Intelligence Group/AFP/File)

Zawahiri assumed the leadership of al-Qaeda shortly after the United States killed 9/11 mastermind Osama Bin Laden just a little over 11 years ago. Having descended from a well-to-do Egyptian family, Zawahiri at one point served as Osama Bin Laden’s physician before assuming leadership. A June 2021 United Nations report pinpointed his location somewhere in the border region of Pakistan and Afghanistan.

Having helped to orchestrate the September 11, 2001, hijackings that brought down the World Trade Center, Zawahiri said in an April 2002 propaganda video that the “19 brothers who went out and gave their souls to Allah almighty, God almighty has granted them this victory we are enjoying now.”

He had been on the run from U.S. forces since the invasion of Afghanistan and nearly died during an assault in the Tora Bora region that killed his wife and children.

The FBI is as of press time offering $25 million for information leading to his “apprehension of conviction.”

The White House announced that, finally, Joe has beaten back COVID. Again. I think this was his 12th rebound from being COVID negative. For the media … END_OF_DOCUMENT_TOKEN_TO_BE_REPLACED

The Partisan Playbook AP Photo/J. Scott Applewhite The Senate is working overtime this weekend to pass the $433 billion spending bill known as the … END_OF_DOCUMENT_TOKEN_TO_BE_REPLACED

Shower rooms have changed a bit. So have Christian associations. In Port Townsend, Washington … END_OF_DOCUMENT_TOKEN_TO_BE_REPLACED

Unbelievable? Nope. Not in the least. A Jewish group at the liberal City University of New York … END_OF_DOCUMENT_TOKEN_TO_BE_REPLACED

Former Hawaii Democrat congresswoman Tulsi Gabbard, who, in one of the greatest presidential debate … END_OF_DOCUMENT_TOKEN_TO_BE_REPLACED

John Harwood, the Democratic representative from CNN, is attacking Marco Rubio for calling the … END_OF_DOCUMENT_TOKEN_TO_BE_REPLACED