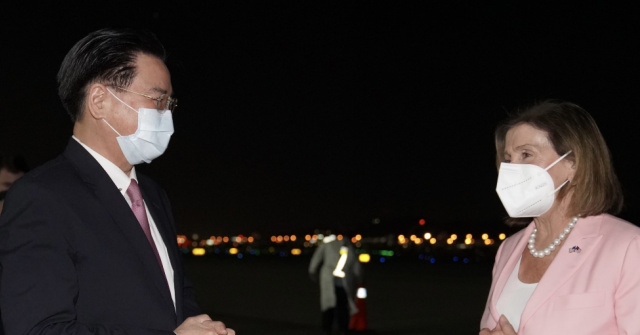 Twenty-six Republican senators, in a rare move supporting a member of the opposite party, released a statement supporting House Speaker Nancy Pelosi (D-CA) for stopping in Taiwan during her diplomatic trip to Asia.

“We support Speaker of the House of Representatives Nancy Pelosi’s trip to Taiwan,” the group of Republicans led by Sens. Kevin Cramer (R-ND) and Dan Sullivan (R-AK) wrote, noting that lawmakers have made the trip many times before.

The Speaker’s trip marks the first time in 25 years that a U.S. official of her level visited Taiwan. The previous visit was in 1997 by then-Republican House Speaker Newt Gingrich (GA).

In fact, last week, Gingrich urged Pelosi to take her intended trip to Taiwan despite the Biden administration’s reservations about the trip.

“I feel very strongly that Speaker Pelosi should go to Taiwan, and she should take a bipartisan delegation,” Gingrich said at the 2022 America First Policy Institute summit in Washington, DC, while receiving loud applause.

“We told them after this [the trip] had all been announced that we’re going to go to Taiwan. And they were furious. And the [Chinese] Ambassador called [the person] who was handling national security and was our trip planner,” he said about his experience being the highest ranking American official ever to visit Taiwan in 1997 and the pressure he faced at the time.

“And I remember he happened to be in my office. We took the call, and at one point, he says, ‘The Chinese Communist Party does not dictate the travel plans of the American Speaker of the House,’” Gingrich added.

The Senate on Sunday passed the $700 billion Inflation Reduction Act, a scaled-down version of the Build Back Better Act. The Senate voted to pass … END_OF_DOCUMENT_TOKEN_TO_BE_REPLACED

Randi Weingarten, president of the American Federation of Teachers, one of the most powerful labor unions in the country, accused Sen. Marco Rubio … END_OF_DOCUMENT_TOKEN_TO_BE_REPLACED

As Democrats from Capitol Hill to California have ignored — if not cheered on — the Biden Border Crisis™ from Day One, it’s been a “slightly” … END_OF_DOCUMENT_TOKEN_TO_BE_REPLACED

On this week’s broadcast of FNC’s “Fox News Sunday,” former ambassador to the United Nations … END_OF_DOCUMENT_TOKEN_TO_BE_REPLACED

Friday, a Texas jury returned a whopping judgment of $42.5 million in punitive damages against … END_OF_DOCUMENT_TOKEN_TO_BE_REPLACED