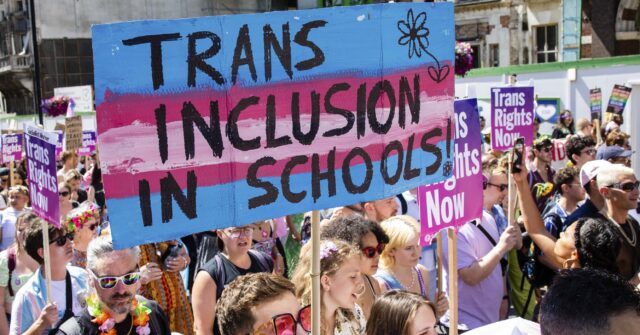 Schools in Britain that are forcing transgender policies onto their pupils are running the risk of being sued, the UK Attourney General has warned.

Suella Braverman, the Attorney General for England and Wales, has told schools in the country that they may be in breach of the law should they keep pushing transgenderism onto their students.

The statement comes as both primary and secondary schools in the country come under fire for militant pro-transgender policies, with one establishment even threatening the parents of a six-year-old boy that their child would be viewed as “transphobic” if he failed to “believe” their “trans” classmate was “gender-fluid”.

In a move that could be seen as an attempt to boost her culture war credentials in the hope of of earning a top job in a future UK cabinet, Braverman has now said that schools forcing transgenderism policies on their pupils could be opening themselves up to lawsuits, telling schools that they must not force their students into going along with trans ideology.

“Pupils should not be punished for refusing to adopt a preferred pronoun for a gender-questioning child in a case where the school has decided to affirm a child’s preference,” Braverman wrote in a piece published by The Telegraph.

“A school cannot compel other children to take part in the social-transitioning,” she continued. “Children should also not fear punishment for refusing to take part in activities promoted by trans-lobby groups such as Stonewall or face any disadvantage for questioning what they are being taught on gender identity.”

In particular, Braverman said that schools which failed to provide single-sex toilets, or enabled a child to socially “transition” to a different gender without parental consent could be in breach of their legal duty of care.

“…schools and teachers who socially transition a child without the knowledge or consent of parents or without medical advice increase their exposure to a negligence claim for breach of their duty of care to that child,” Braverman warned, while also warning that “there is also a separate duty to provide single-sex toilets in schools, breach of which would be unlawful”.

Disabled Children Being Bullied as ‘Transphobic’ for Failing to Use Mandated Pronouns https://t.co/u9tGqhS90G

While the timing of Braverman’s warnings comes just weeks before a new UK government is due to be formed, and her name is in the running for Home Secretary, the threat of legal consequences could nevertheless impact a UK school system that is becoming increasingly influenced by transgenderism politics.

A parental campaigning group in Scotland warned only last month that children are being castigated by their peers and teachers for failing to fall in step with the trans agenda, even claiming one instance where a disabled child was bullied after failing to use another child’s preferred pronouns.

Meanwhile, another school in the south of England hit the headlines earlier in the year after its principal told the parents of one six-year-old child that he would be viewed as “transphobic” should he fail to “believe” that another pupil was “gender-fluid”.

A letter from the school reportedly claimed that children who showed “feelings of discomfort and inability to trust or connect with someone based on their transgender status,” or who failed to use a student’s “adopted name” would be branded “transphobic” by the school.

Our weekly recognition of less-than-meritorious excellence in journalism worthy of a skewed version of Pulitzer Prize consideration. As an extension … END_OF_DOCUMENT_TOKEN_TO_BE_REPLACED

The left has hated Rep. Liz Cheney (R-WY) and her father, former Vice President Dick Cheney, for years. Some still do and are furious that the … END_OF_DOCUMENT_TOKEN_TO_BE_REPLACED

History be damned, there has to be hatred with a centuries-old flag representing libertarian … END_OF_DOCUMENT_TOKEN_TO_BE_REPLACED

History be damned, there has to be hatred with a centuries-old flag representing libertarian … END_OF_DOCUMENT_TOKEN_TO_BE_REPLACED

It’s only a week, but already there seems to be a ton of questions about the FBI raid against … END_OF_DOCUMENT_TOKEN_TO_BE_REPLACED

Let’s put ourselves in the shoes of the congressional Democrats for a moment. I know — but just for … END_OF_DOCUMENT_TOKEN_TO_BE_REPLACED

A man shot himself after crashing his car into a barricade near the U.S. Capitol building early … END_OF_DOCUMENT_TOKEN_TO_BE_REPLACED