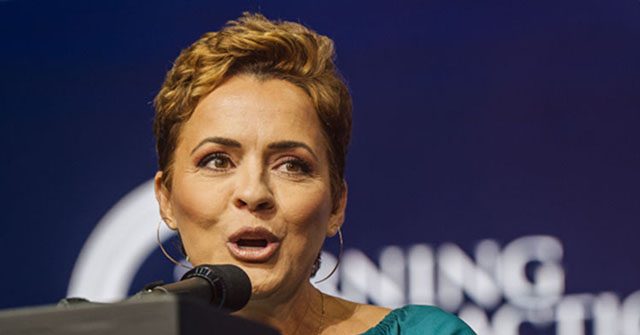 Results are still pending in Arizona’s Republican gubernatorial primary, though former Fox 10 Phoenix anchor Kari Lake leads her opponent Karrin Taylor Robson. It is unclear when a winner could be declared.

Lake, backed by former President Donald J. Trump, holds a more than 11,300 vote lead over Robson with 80 percent reporting, the Associated Press election results compiled by the New York Times show. Lake has 294,260 votes versus Robson’s 282,936. In a tweet, Dave Wasserman of the Cook Report suggested Lake will come away with the nomination, though only one county is reporting more than 95 percent of its votes.

As of 2:45 p.m EST, the vote differential had not changed since Wasserman’s tweet at 8:49 a.m. EST, and the percentage of votes counted in each county was as follows:

On Wednesday morning, Maricopa County Recorder Stephen Richer tweeted that additional results from the county will be posted at 7:00 p.m. local time or 10:00 p.m. EST. He noted that some 130,000 early voting packets were scanned overnight until 6:00 a.m. local time, and a subsequent signature verification process was to take place soon after. From there, they would be sent to a “bipartisan processing team,” and whatever results are counted by day’s end will be posted this evening. “We will also be contacting all voters whose signature we deemed not-matching,” and voters will have five business days “to cure their signature[s].”

At 7:00 PM tonight, the County will post whatever we tabulate today.

We will also be contacting all voters whose signature we deemed not-matching.

Voters have 5 business days after Election Day to cure their signature.https://t.co/Dp6AA54q7t

During Arizona’s primary elections, the RNC and Republican Party of Arizona’s poll observer program documented and reported multiple failures by Pinal County’s Elections Administrator, including 63,000 mail-in ballots delivered to the wrong voters and multiple Republican-heavy precinct locations running out of ballots. This is a comprehensive failure that disenfranchises Arizonans and exemplifies why Republican-led efforts for transparency at the ballot box are so important. Pinal County Elections Director David Frisk should resign immediately.

“Due to unprecedented demand for in-person ballots, Pinal County has experienced a ballot shortage in certain, limited precincts,” a tweet from the county government page noted, adding that “additional ballots” were being printed and distributed to polling precincts short on ballots.

Due to unprecedented demand for in-person ballots, Pinal County has experienced a ballot shortage in certain, limited precincts. Pinal County is continuing to print additional ballots and distributing them to each affected precinct polling place.

I’ve often talked about the animosity many in the gun community feel toward the ATF. It’s a real thing, after all, and the ATF doesn’t seem to care … END_OF_DOCUMENT_TOKEN_TO_BE_REPLACED

You’ve read the stories. FBI Director Chris Wray bugged out on his Senate hearing where he managed to say… pretty much nothing. The only substantive … END_OF_DOCUMENT_TOKEN_TO_BE_REPLACED