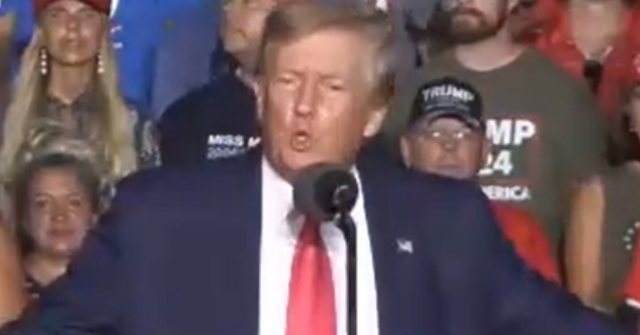 Former President Donald Trump will be holding a Save America Rally in Waukesha, Wisconsin at 7 p.m CDT. He will be speaking in support of Tim Michels, who is running for governor of the state.

Michels received the former president’s endorsement in June, and he is running against Lt. Gov. Rebecca Kleefisch in the Republican gubernatorial primary, set to be held August 9. Kleefisch enjoys the support of former Vice President Mike Pence, causing this race to echo the recent gubernatorial primary in Arizona, where the former running mates also supported different candidates.

As with several primary races this year, this one has been interpreted as part of a “proxy war” between Trump and the Republican establishment to shape the future of the party. As of Wednesday, Trump’s endorsement record sits at 172-10. 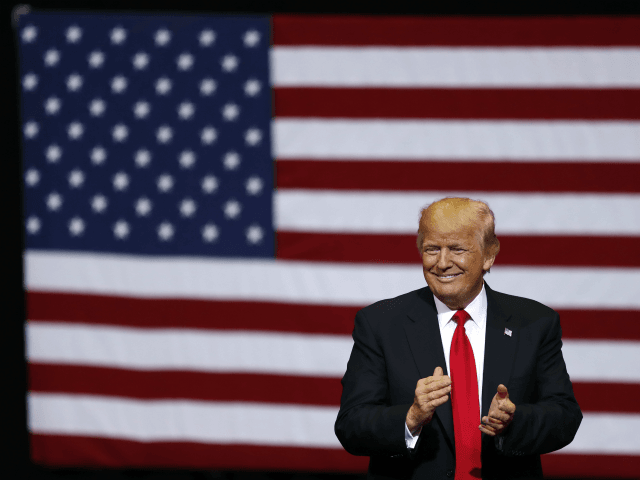 Candidates backed by former President Donald J. Trump are now 172-10 in statewide and federal races in 2022 after a perfect night in Kansas, Michigan, and Missouri. His candidates are undefeated so far in Arizona – but results are still pending in the gubernatorial race – while he also has two candidates in Washington whose races are still awaiting results.

It was a similar story in Michigan, where all eight candidates with Trump’s backing advanced to the general election. John Gibbs and GOP gubernatorial nominee Tudor Dixon headlined the contests in the Great Lake State. Gibbs proved victorious in his race against Rep. Peter Meijer (R-MI), who was one of the ten impeachment Republicans. Dixon advanced to the general after securing 40.6 percent of the vote, nearly doubling her closest competitor Kevin Rinke at 21.9 percent.

The remaining Trump-backed candidates who secured nominations in Michigan include:

The winning continued in Missouri, where Attorney General Eric Schmitt – one of the “ERIC[s]” Trump endorsed in the race Monday night – clinched the GOP nomination for U.S. Senate. Reps. Blaine Luetkemeyer (R-MO), Sam Graves (R-MO), and Jason Smith (R-MO) all advanced to the general election in their reelection bids.

Out in Arizona, Blake Masters, along with five other candidates, took home nominations, while three races remain undecided, though Trump-endorsed candidates lead them all. Masters ran as a populist candidate and beat out opponents including Jim Lamon and Mark Brnovich, securing 39 percent of the vote with 78 percent reporting.

Trump-backed gubernatorial candidate Kari Lake has taken an over 11,000 vote lead with 80 percent of the vote reported in her contest against Karrin Taylor Robson, who is backed by former Vice President Mike Pence. Further results in the race from Maricopa County are not expected until 7:00 p.m. local time, according to county Recorder Stephen Richer.

Aside from Masters, the other five candidates who clinched nominations Tuesday include:

Similar to Arizona, results have stalled in Washington State, where Trump-backed candidates Joe Kent and Lauren Culp challenged pro-impeachment Reps. Jaime Herrera Beutler (R-WA) and Dan Newhouse (R-WA). Kent sits in third place in the open primary race for the Third Congressional District with 57 percent reporting, while Culp is also in third place with 47 percent reporting in the Fourth Congressional District. Both candidates need to come in at least second place in order to ensure their advancements to the general election.

Trump entered the evening with an endorsement record of 147-10 following a major win in Maryland, where his candidate Dan Cox blew out Kelly Schulz, who was endorsed by Gov. Larry Hogan (R-MD). His endorsement record is now perfect in 26 states following Tuesday, and it could very well grow by the end of Wednesday:

Moreover, the 45th president’s endorsement record remains perfect in his U.S. Senate endorsements with Masters’s win in Arizona, Schmitt’s victory in the Show Me State, and Moran’s win in Kanas. The thirteen other U.S. Senate candidates who have prevailed in their primaries include:

The midterm primaries pick up again Thursday night in Tennessee. 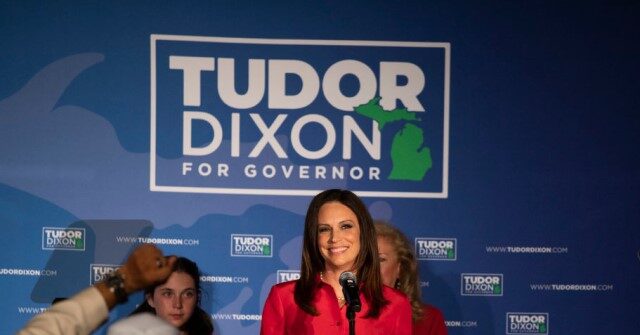 Fresh off securing the GOP bid in Michigan’s gubernatorial primary, Tudor Dixon is crediting former President Donald Trump’s backing for serving as a “rocket launch” for her campaign.

“I think that helped quite a bit,” Dixon said of Trump’s endorsement just days before the primary. “And we were rising in the polls, but, boy, that really shot us. It was our rocket launch at the end of the campaign. So, we are very grateful … to the president for coming into the race. And it seemed to seal the deal at the end, and we are excited about where we are going now.”

The Michigan Republican then railed against her incumbent opponent, Gov. Gretchen Whitmer (D), and her handling of the coronavirus pandemic.

“The main issue is education, but that’s a combination of a few different things in the state,” Dixon outlined. “Education is key. We are 38th in the nation. All of the data shows us that by 2030 if we don’t make a change, we are going to be in the bottom five states in the nation. It is critical that our kids are getting the right education but also getting back on track.”

She continued, “[T]his is something that when we look back at 2020 what Gretchen Whitmer did — she kept our kids out of school and then had the opportunity to give them reading scholarships to get them back on track, and she vetoed that. So, it is really important not only that we improve our education system as a whole but get our students back on track and make sure we are providing that to parents; whatever they need to get their kids back on track.”

Tudor Dixon secured victory on Tuesday in Michigan’s Republican gubernatorial primary contest, and will now go on to face off against incumbent Democratic Gov. Gretchen Whitmer in the governor’s race later this year.

“The Great State of Michigan is being destroyed by the Radical Left Democrats. Governor Gretchen Whitmer is the Queen of lockdowns (except for her husband), school closures, and a suffering economy that’s not just hurting Michigan, but the entire Country. It’s time for a BIG change, and a BIG comeback!” Trump declared in a statement. “Tudor Dixon will make a great Governor and has my Complete and Total Endorsement. She will not let you down!”

Trump had also issued a statement endorsing “ERIC” in Missouri’s Republican U.S. Senate primary, an unusual move considering that there was more than one candidate with that name running in the contest.

“There is a BIG Election in the Great State of Missouri, and we must send a MAGA Champion and True Warrior to the U.S. Senate, someone who will fight for Border Security, Election Integrity, our Military and Great Veterans, together with having a powerful toughness on Crime and the Border. We need a person who will not back down to the Radical Left Lunatics who are destroying our Country. I trust the Great People of Missouri, on this one, to make up their own minds, much as they did when they gave me landslide victories in the 2016 and 2020 Elections, and I am therefore proud to announce that ERIC has my Complete and Total Endorsement!” Trump said in the statement.

Kansas attorney general Derek Schmidt won the state’s GOP gubernatorial primary and will move on to compete against incumbent Democratic Gov. Laura Kelly during the general election. Schmidt had been endorsed by Trump.

Trump is widely expected to mount another White House bid during the 2024 election cycle.

The White House announced that, finally, Joe has beaten back COVID. Again. I think this was his 12th rebound from being COVID negative. For the media … END_OF_DOCUMENT_TOKEN_TO_BE_REPLACED

The Partisan Playbook AP Photo/J. Scott Applewhite The Senate is working overtime this weekend to pass the $433 billion spending bill known as the … END_OF_DOCUMENT_TOKEN_TO_BE_REPLACED

Shower rooms have changed a bit. So have Christian associations. In Port Townsend, Washington … END_OF_DOCUMENT_TOKEN_TO_BE_REPLACED

Unbelievable? Nope. Not in the least. A Jewish group at the liberal City University of New York … END_OF_DOCUMENT_TOKEN_TO_BE_REPLACED

Former Hawaii Democrat congresswoman Tulsi Gabbard, who, in one of the greatest presidential debate … END_OF_DOCUMENT_TOKEN_TO_BE_REPLACED

John Harwood, the Democratic representative from CNN, is attacking Marco Rubio for calling the … END_OF_DOCUMENT_TOKEN_TO_BE_REPLACED