ROME — Speaker of the House Nancy Pelosi attended Mass in the Vatican presided over by Pope Francis Wednesday, and received Holy Communion not from the pope himself but from another priest assisting at the Mass.

It was unclear whether the priest knew who Mrs. Pelosi was or that she has been banned from receiving Communion in her home archdiocese of San Francisco for her aggressive promotion of abortion, which the Catholic Church considers to be murder.

At a reception Tuesday evening at the U.S. Embassy to the Holy See, Pelosi said she was visiting Rome in a private capacity as part of a family vacation.

In 2021, Pelosi praised Pope Francis’ “immense moral clarity,” but carefully avoided any mention of abortion, which Francis has described as “murder” and a “scourge,” likening it to hiring a paid assassin to take out a child. A “just society recognizes the primacy of the right to life from conception to natural death,” he has asserted.

In January 2015, Pelosi said that she knew “more about having babies than the pope,” insisting that a woman has “the right” to an abortion.

In her acceptance speech for abortion giant Planned Parenthood’s highest honor — the Margaret Sanger Award — Pelosi, who identifies as a Catholic, went still further, calling pro-lifers (like the pope) “dumb,” “closed-minded,” and “oblivious.” 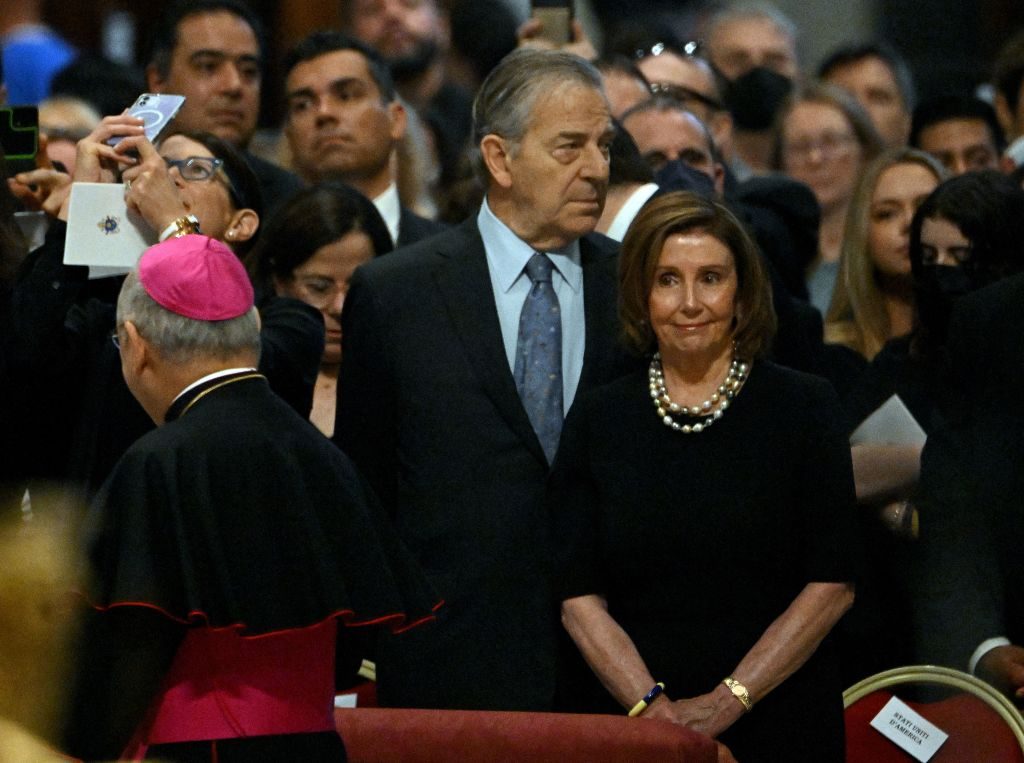 U.S. Speaker of the House Nancy Pelosi (R) attends a mass for the Solemnity of Saints Peter and Paul led by the pope on June 29, 2022 at St Peter’s basilica (TIZIANA FABI/AFP via Getty Images)

In a 2015 interview, Pope Francis underscored the paradox of modern secular societies that go to great lengths to protect children from harm, and yet defend a so-called “right” to abortion.

“Curiously,” he said, these countries with very strict laws regarding the protection of minors, who even punish fathers or mothers who spank their children, “have laws allowing them to kill their children before they are born.”

“Those are the contradictions we live with now,” he said.

Following the Supreme Court’s decision to overturn Roe v. Wade last Friday, returning the issue of abortion to the states, Mrs. Pelosi called the court’s ruling the cumulation of a “dark, extreme” effort led by the Republican party.

“Because of Donald Trump, Mitch McConnell and the Republican Party, their super majority and Supreme Court, American women today have less freedom than their mothers,” Pelosi said. “With Roe and their attempt to destroy it, radical Republicans are charging ahead with their radical crusade to criminalize health freedom.”

A flurry of U.S. Bishops have rallied behind San Francisco Archbishop Salvatore Cordileone, who has barred Nancy Pelosi from receiving Holy Communion because of her aggressive abortion advocacy. https://t.co/n1iEJpaz3b

The U.S. Catholic bishops, on the other hand, registered their “joy” over the court’s decision, praising the ruling for overturning an “unjust law” that had resulted in “the deaths of tens of millions of preborn children, generations that were denied the right to even be born.”

“It is a credit to the Catholic Church that it led the discussion on the morality of abortion for all these years,” Dr. Donohue noted in his June 24 essay. “This ruling makes us proud to be Catholic.”

In a dear colleague letter dated Jun. 27, Pelosi outlined several abortion bills House Democrats will take up before the upcoming elections in November. Among them is another version of the Women’s Health Protection Act, a bill that would create a federal right to abortion and drastically roll back state abortion restrictions — restrictions that are now legal since the Supreme Court overturned Roe v. Wade in a landmark decision on Friday.

Legislation to codify Roe has passed the House before but failed to win enough support in the Senate to overcome a filibuster by pro-life Republicans. It has virtually no chance of passing under the current makeup of Congress.

Two other bills House Democrats will advance include legislation protecting the right to travel out of state for an abortion and a privacy bill that would prevent prosecutors in pro-life states from accessing data stored in reproductive health apps to enforce abortion restrictions.

In her letter, Pelosi blasted the “extremist Supreme Court” and accused the court of attempting to “punish and control the American people.”

“Democrats must continue our fight to expand freedom in America. Doing so is foundational to our oath of office and our fidelity to the Constitution,” Pelosi said.

Her letter singled out Justice Clarence Thomas’ concurring opinion in Dobbs v. Jackson Women’s Health Organization, in which Thomas wrote that the Supreme Court should go farther than overturning Roe and “reconsider all of this Court’s substantive due process precedents, including Griswold, Lawrence, and Obergefell.” Those are several highly controversial cases dealing with contraception, sodomy laws, and gay marriage, respectively.

“Because any substantive due process decision is ‘demonstrably erroneous,’ […] we have a duty to ‘correct the error’ established in those precedents,” Thomas wrote.

“Justice Clarence Thomas confirmed many of our deepest fears about where this decision may lead: taking aim at additional long-standing precedent and cherished privacy rights, from access to contraception and in-vitro fertilization to marriage equality,” she wrote. “Legislation is being introduced to further codify freedoms which Americans currently enjoy. More information to follow.”

Thomas’ opinion was not shared by the other justices in the majority. In the opinion authored by Justice Samuel Alito, the court explicitly rejected the proposition that Dobbs should be used to question the court’s rulings on issues not related to abortion.

“And to ensure that our decision is not misunderstood or mischaracterized, we emphasize that our decision concerns the constitutional right to abortion and no other right,” Alito wrote. “Nothing in this opinion should be understood to cast doubt on precedents that do not concern abortion.”

But Pelosi’s letter does not address the substance of the Supreme Court’s decision in Dobbs. The final paragraph reveals that Pelosi’s outrage is directed at motivating voters to the polls in November to protect Democratic majorities in Congress.

“It is clear from how Donald Trump and Mitch McConnell stacked the Supreme Court that elections have ramifications,” Pelosi wrote. “It is essential that we protect and expand our pro-choice Majorities in the House and Senate in November so that we can eliminate the filibuster so that we can restore women’s fundamental rights – and freedom for every American.”

Did you know that Karine Jean-Pierre is the first openly gay, black, immigrant White House Press Secretary in history? You’d be hard-pressed not to … END_OF_DOCUMENT_TOKEN_TO_BE_REPLACED

To those who think neo-pronouns are for the birds: You’re actually right for once. As delivered by … END_OF_DOCUMENT_TOKEN_TO_BE_REPLACED