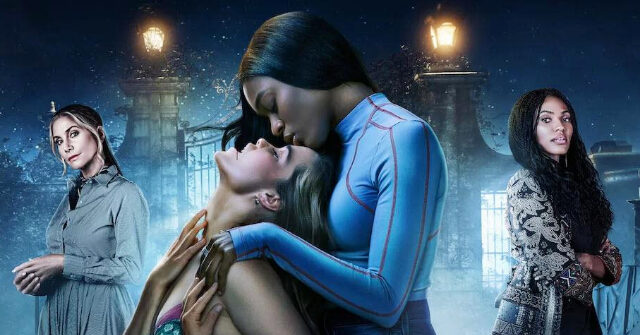 Netflix has so many problems on its plate — fleeing subscribers, angry transgenders, knives-out competition — that a boycott by fans of a teen lesbian vampire series seems like a gnat-sized annoyance in comparison.

But their outrage was vociferous enough on Wednesday to cause #CancelNetflix to trend on Twitter after the streamer drove a stake through the heart of First Kill after just one season. The sapphic drama series, which debuted in June, was neither a critical nor popular success, but its premature demise had its loyal followers seeing red.

Some of the show’s fans have accused Netflix of “lesbophobia” and racism, noting that First Kill featured characters who were gay women of color. “Why do y’all hate lesbians so much?” one fan asked.

Netflix is legit going down in history as lesbophobic and racist and they can’t do anything about it! #SaveFirstKill #CancelNetflix pic.twitter.com/cmukV1UqyJ

Like my thing is we’re never going to get a dark skin lesbian lead again. Like this was rare for media. This was a rare sighting for people that look like me. And they just canceled it. Like I still can’t process this shit bro #cancelnetflix #SaveFirstKill

The show’s rating and views were just fine. When will companies stop canceling shows that gives their lesbian viewers representation? Why do y’all hate lesbians so much?#CancelNetflix #SaveFirstKill pic.twitter.com/GmNtRCUcNX

Deadline reported that Netflix canceled First Kill after the series failed meet the thresholds for viewing and completion of episodes needed to renew the series for a second season. But that reasoning didn’t appear to convince the show’s fans.

That’s strange. It’s like people actually liked this show and watched it for 99+ million hours or something #FirstKill #CancelNetflix pic.twitter.com/wV7i3HoDid

Many First Kill fans took special delight in seeing so many people cancel their Netflix subscriptions.

As Breitbart News reported, Netflix revealed last month that it lost close to 1 million subscribers in the second quarter — the largest quarterly loss of customers in the company’s history. The exodus of subscribers has pressured the streamer to cut costs and lay off hundreds of employees.

Shares of Netflix are down more than 60 percent for the year so far.

There were some rumors that Dallas Cowboys running back Tony Pollard would see more snaps, which could mean star running back Ezekiel Elliot … END_OF_DOCUMENT_TOKEN_TO_BE_REPLACED

On this week’s broadcast of FNC’s “Fox News Sunday,” former ambassador to the United Nations Nikki Haley, discussed what could happen in the 2024 … END_OF_DOCUMENT_TOKEN_TO_BE_REPLACED

Friday, a Texas jury returned a whopping judgment of $42.5 million in punitive damages against … END_OF_DOCUMENT_TOKEN_TO_BE_REPLACED

If Rep. Liz Cheney were trying to prove she’s the worst GOP politician in decades, what would she be … END_OF_DOCUMENT_TOKEN_TO_BE_REPLACED