Ayaansh Kumar of New Jersey is just 22-months-old but he already knows how to use a cellphone to buy merchandise.

While using his mother’s phone, the child was having fun clicking on things and ordering over $1,700 worth of furniture that was in an online cart she set up with her Walmart account, Fox News reported Saturday.

He apparently located the store’s cart icon, and it was not long before packages started arriving at the family home located in Middlesex County.

The family has since run out of room for the boxes, the parents told the outlet during an interview.

Pramod Kumar, who is the father of three children, said, “This came as a surprise to us, as we never thought that he would place that many orders. We have been getting packages all week now and are running out of space in our home. Today we got two more big packages.”

One tiny tot sure knows how to shop.

Video footage showed the boxes being delivered to the house and some stacked inside.

Mother Madhu Kumar said, “We have 10 to 12 big, big packages here now,” and Pramod noted, “These are accent chairs in very big packages. I can’t even lift some of them.”

He also said, “We had put the items in an online cart for our review later, to revisit these items and see if we really wanted them or not. My wife thought she would go back and check these out later, to see what she wanted or not.”

Walmart described its app as having everything people need in one place.

Madhu said they needed two to four chairs but “there were so many items in the online shopping cart, and our son went there and clicked ‘order’ for all of them. So he bought 10-12 chairs.”

She noted, “He placed all of the orders, and I didn’t see my email until days later. Soon the packages started arriving.”

Now, the family hopes to be given a refund when they try to return some of the merchandise.

“Initially we were thinking we would return everything,” Pramod told Fox News.

“But now, after this news has made so many people laugh and made them smile — and especially during this bad time of COVID, and all of these other things going on — we are just very happy that this is making people laugh,” he explained.

The order removes the state’s previous option for unvaccinated workers to test regularly for the coronavirus instead of getting vaccinated. Medical exemptions and exemptions for “deeply held” religious beliefs will still be granted, Murphy said. The order includes all workers in congregate settings such as prisons and group homes.

“We are no longer going to look past those who put their colleagues and, perhaps more importantly, those who are their responsibility in danger of COVID,” Murphy said. “That has to stop.”

According to the report, 43 percent of the state’s nursing home and other long-term care facility staff have received a booster shot, and 88 percent are fully vaccinated. State officials reportedly did not have statistics about other healthcare workers. 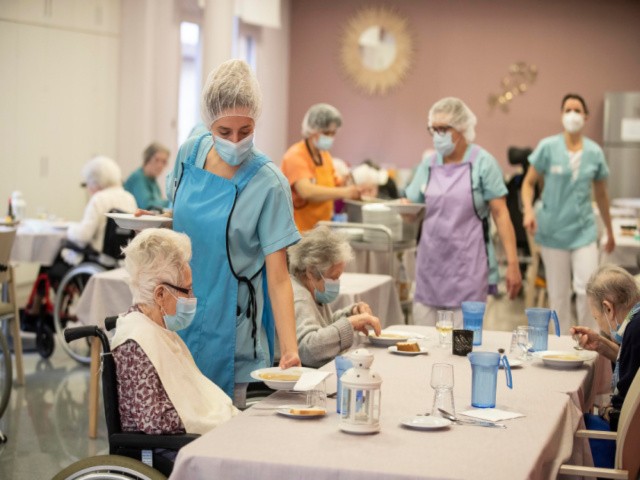 The updated mandate has garnered varied reactions from healthcare worker unions. George Gresham, president of 1199SEIU United Healthcare Workers East told the publication he supports the order and believes “universal vaccination” is the best way to “return to normalcy.”

“This includes ensuring that everyone has the maximum protection against the virus and its potentially devastating effects, and we have long supported vaccinations and boosters according to established science,” Gresham said.

Debbie White, a nurse and president of the Health Professionals and Allied Employees union, had the opposite reaction and worries the mandate will increase the state’s doctor and nurse shortage.

“We are in the middle of an enormous surge in our hospitals and many health care workers are sick,” White said. “Every health care facility in New Jersey is faced with the challenge of finding enough staff to provide care. While we appreciate the need to increase vaccination rates, this does not solve the problems that exist right now.”

Amazon — the multinational e-commerce giant — is working to generate bipartisan support in Washington, D.C., for the federal legalization of … END_OF_DOCUMENT_TOKEN_TO_BE_REPLACED

Although America has its appalling share of child sex offenders, the law and culture still consider such behavior a heinous crime – at least until the … END_OF_DOCUMENT_TOKEN_TO_BE_REPLACED

So-called ‘Plan B’ restrictions have ended in England, with widespread mask mandates being … END_OF_DOCUMENT_TOKEN_TO_BE_REPLACED

Prince Andrew’s lawyers on Wednesday demanded a trial by jury in the U.S. District Courts as he … END_OF_DOCUMENT_TOKEN_TO_BE_REPLACED

The following content is sponsored by the Palm Beach Letter. Cryptocurrencies may be essential … END_OF_DOCUMENT_TOKEN_TO_BE_REPLACED

Kudos to Ramesh for his post on this issue. The attempt to use alumni preferences to justify racial … END_OF_DOCUMENT_TOKEN_TO_BE_REPLACED

It has been evident for a long time that the Left only likes democracy if it wins. Proof of that … END_OF_DOCUMENT_TOKEN_TO_BE_REPLACED

Irish fishermen look set to take on the Russian Navy, with a fishing organisation in the country … END_OF_DOCUMENT_TOKEN_TO_BE_REPLACED

On Wednesday, RedState reported on a Quinnipiac poll out of Georgia which showed some disturbing … END_OF_DOCUMENT_TOKEN_TO_BE_REPLACED

Which, unfortunately, is going to be where a lot of GOP dreams are going to meet a similar fate this … END_OF_DOCUMENT_TOKEN_TO_BE_REPLACED

Perhaps as an unlooked-for consequence of his woke rant, Disney seems to be taking actor Peter … END_OF_DOCUMENT_TOKEN_TO_BE_REPLACED