New York City Mayor Bill de Blasio (D) on Monday announced students will be subjected to weekly coronavirus testing, which he said will begin next week, on September 27.

“We will now go to weekly testing. We’ll be testing in elementary, middle, and high school each school every week,” de Blasio said Monday, announcing the updated protocols. “That will allow more kids to safely remain in the classrooms.”

He added that they are changing the quarantine approach as well. If there is a positive case in the classroom, unvaccinated children will no longer have to quarantine, as long as they were masked and maintaining a distance of three feet. Previously, such students had to quarantine for ten days.

“That will allow more kids to safely remain in the classroom,” the Democrat mayor said.

The policy follows a push from the United Federation of Teachers, which demanded changes. Michael Mulgrew, president of the teachers’ union, wrote in a letter:

While so far our public schools have successfully reopened, I am concerned that this year’s reduced frequency of Covid testing means that thousands of children will spend days in classrooms without the early warning system that last year made our schools among the safest places in the community.

The news comes as New York City ramps up its vaccine passport requirements, demanding businesses discriminate against unvaccinated individuals. Enforcement began last month. Businesses that violate the rules can face fines of up to $5,000.

“It’s time for people to see vaccination as literally necessary to living a good and full and healthy life,” de Blasio said as he announced the “Key to NYC Pass” last month.

Three Houston women were charged after authorities said the group assaulted a New York City hostess when they were asked to provide proof of vaccination to dine inside a restaurant.

Video footage showed the incident involving the tourists at Carmine’s Restaurant in Manhattan that occurred at approximately 5:00 p.m. on Thursday, ABC 13 reported.

“It also happened to be the third day since enforcement of New York City’s vaccine mandates began,” the outlet continued:

City inspectors had just commended Carmine’s for their enforcement of the policy, but hours later, the hostess was attacked by the three women from Houston who didn’t want to eat outside. The women have been identified as 49-year-old Sally Lewis, 44-year-old Kaeita Rankin, and her 21-year-old daughter Tyonnie Rankin.

In video of the scuffle, the group nearly knocked over a podium as one of them appeared to grab the shirt collar of a woman standing behind it.

“Oh my God,” the woman shouted as bystanders intervened.

At one point, a man in a white T-shirt was seen carrying a woman away from the scene while another man wearing a white apron helped him.

“This turned into a mess, and from there its inexcusable, ridiculous,” Carmine’s owner, Jeff Banks, told reporters.

The victim, who had been working for just three weeks, reportedly asked the women for proof of vaccination and identification cards to match them.

“When she questioned the legitimacy of their vaccination cards, the out-of-town visitors got upset and lunged at her, punching her repeatedly and also injuring two other staff members. The women reportedly didn’t want to show ID, which police say contributed to the belief they were not valid,” the ABC article read.

The three women were subsequently arrested and charged with assault and criminal mischief.

The owner has joined other restaurants in the area to raise concerns regarding the enforcement of the vaccine mandate, and hired private security to stand beside the hostess booth over the weekend.

New York City Police said around 8:15 a.m. Sunday a male approached a 16-year-old male in a Manhattan subway station and asked the kid for a dollar.

After the teen refused to offer a handout, police said the male followed the teen in the East Broadway Station (F Line), made an “anti-white statement,” and kicked the kid in the abdomen and leg.

The NYPD’s Hate Crime Task Force issued a notice about the incident on Twitter and urged anyone with information to call 800-577-TIPS.

How did folks respond?

A debate ensued among some Twitter users after one declared that the attack “isn’t a hate crime lmfao.”

Another replied, “IT’S ABSOLUTELY A HATE ARE U SERIOUS??????? Calling anyone anti-their color then assaulting them is A HATE CRIME. U PEOPLE ACT LIKE NOTHING BAD CAN HAPPEN TO US?????????”

To which the first commenter shot back, “Because it can’t lmfao. We’re privileged, and we need to recognize it. There aren’t even any white slurs. OMG someone got called a cracker, so what.”

Others chimed in against the commenter who didn’t believe the attack was a hate crime since the victim is white:

Others took issue with the language of the NYPD Hate Crimes’ tweet:

Yet another commenter offered a race-related zinger to the mix: “I’m sure he was just provoked by the victim’s inherent white rage.”

Enforcement of New York City’s “Key to NYC” Pass began this week, requiring businesses such as restaurants and gyms to discriminate against unvaccinated individuals by denying them entry into their establishments.

Mayor Bill de Blasio (D) originally announced the mandate in mid-August while touting a month-long period to educate the masses on the move, which requires gyms, restaurants, and entertainment venues to bar unvaccinated individuals from entering their establishments or face monetary consequences.

“It’s time for people to see vaccination as literally necessary to living a good and full and healthy life,” he said at the time, softly rolling out the policy in mid-August. Inspections and enforcement, however, began this week. Now, per the city’s mandate, individuals who are eligible to be vaccinated must show proof of at least one shot of vaccination to eat at an indoor restaurant, bar, or other eatery, via a copy of their vaccination card or proof on one of the city or state apps.

Further, according to the Wall Street Journal, “the city amended its work rules to allow employers to fire fast-food workers who refuse to show proof of vaccination”:

The city on Monday is beginning to enforce the vaccination-proof mandate, with inspectors from various agencies checking for signs and written plans, a spokeswoman for the New York City’s mayor’s office said. Restaurants have had to comply with the rule since Aug. 17, though some New York City owners said they have been waiting for the full mandate to kick in before beginning to card customers.

New York’s rules allow customers without proof of vaccination to be inside a restaurant for a short period, roughly 10 minutes or less. Customers can use the bathroom, pay a bill or order takeout, the city says, but still must wear a mask. They can also be served outside. 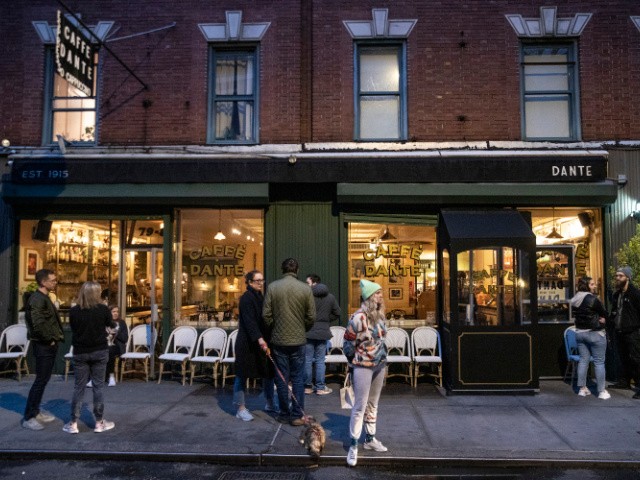 Patrons wait for their orders as food and cocktails are for sale to go at Caffe Dante bar and restaurant in Manhattan on March 19, 2020 in New York City. (Photo by Victor J. Blue/Getty Images)

Businesses that fail to comply could face thousands of dollars in fines — a devastating blow to businesses still attempting to recover from the mass shutdowns, particularly in New York City, last year. The first violation will be $1,000, but further offenses could result in fines up to $5,000.

De Blasio, meanwhile, on Wednesday bragged about the number of doses of vaccines administered — 11,106,486 to date.

“Great number. Growing strong. You’re going to see this number continue to go up again in these next days especially because of both the incentives and the mandates having a full effect over the next few weeks,” he said.

While openly socialist U.S. Rep. Alexandria Ocasio-Cortez (D-N.Y.) was
attracting negative attention for her “Tax the Rich” gown inside the Met Gala earlier this week, Black Lives Matter protesters drew some attention of their own as they demonstrated against police outside the lavish New York City event, Fox News reported.

Protesters chanted the name of Mike Rosado — a Bronx man who died last month in a shootout with police, the cable network noted — and a megaphone-toting officer told the protesters they were being arrested for disorderly conduct.

Some major scuffles broke out, with officers restraining a protester while the crowd told cops to “let go of her!” Fox News said.

But one of the more eye-catching and ear-catching moments occurred when at least two of the protesters called a black cop the N-word, after which the officer had to be restrained by his colleagues and was led away from the conflict.

The clip begins with a protester yelling “don’t let that [N-word] f***in’ walk away!” in reference to the black officer; the protester also accused the cop of putting his “hands on people.”

Another protester can be heard yelling “you done [N-word], you done!”

As the protesters appeared to get closer to the officer in question, the cop began to approach the protesters — and then was quickly pulled away by at least three of his colleagues.

As the groups separated, one of the protesters hollered at the cop in question, “F*** you, bitch-ass [N-word]!”

The clip showing the aforementioned action is the second one below. (Content warning: Racial slurs, profanity):

The individual who posted the above videos accused the cop of being “absolutely rabid” and “out of control.”

Below are two other videos showing the protesters in action and the cops’ response to them. (Content warning: Profanity):

According to
Patch, the protests started Monday afternoon in Lower Manhattan, then moved uptown by around 6 p.m. The outlet said protesters demanded defunding and then abolishment of the NYPD, among other things.

Patch, citing an NYPD spokesperson, said nine people were taken into custody near Fifth Avenue and East 81st Street, but there was no indication if any were charged with crimes.

Supermodel Doutzen Kroes said in a defiant social media post that she would not be getting vaccinated for the coronavirus. Kroes spoke out after a … END_OF_DOCUMENT_TOKEN_TO_BE_REPLACED

In this clip, BlazeTV's Chad Prather delivered an epic rant that most if not all conservatives will identify with. Here is what Chad had to say about … END_OF_DOCUMENT_TOKEN_TO_BE_REPLACED

And the Firm Grasp of the Obvious Award goes to … Chuck Todd of NBC News! “I think he’s got a pretty big credibility crisis on his hands,” … END_OF_DOCUMENT_TOKEN_TO_BE_REPLACED

In a worrying trend for free speech on college campuses, a growing number of students are expressing support for shouting down a campus speaker they … END_OF_DOCUMENT_TOKEN_TO_BE_REPLACED

President Donald J. Trump proved to the Republican Party that the only way to meaningfully advance … END_OF_DOCUMENT_TOKEN_TO_BE_REPLACED

A masked Texas couple said that management at a Rowlett, Texas, bar and restaurant told them that … END_OF_DOCUMENT_TOKEN_TO_BE_REPLACED

Gun buybacks are a joke. First, they don’t take guns out of criminal hands for the most part. Most … END_OF_DOCUMENT_TOKEN_TO_BE_REPLACED