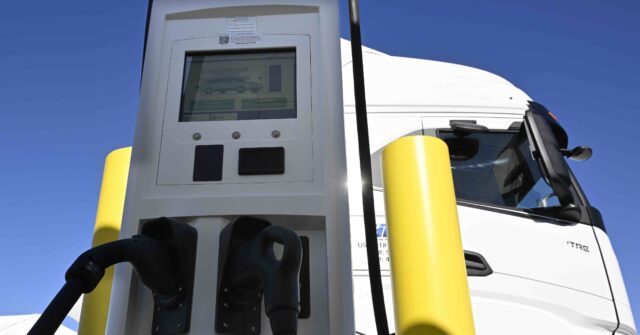 The State of California is continuing its aggressive policies pushing consumers and companies to adopt electric vehicles by proposing to force shipping companies to use electric trucks at the state’s beleaguered port facilities.

Despite a supply-chain crisis that resulted in record backlogs at Los Angeles and Long Beach ports last year — partly contributing to New York overtaking them — the California Air Resources Board (CARB) is pressing on.

The Wall Street Journal reports the state will impose an electric truck mandate, despite the lack of charging infrastructure and the space to build it, to create a market for electric trucks en route to a broader transition:

The California Air Resources Board is proposing phasing out older big rigs operating in the busy corridors shuttling shipping containers between ports, rail yards and warehouses and require that all new vehicles be powered by clean fuels starting in 2024. From 2025, the state would bar trucks powered by internal combustion engines that have more than 800,000 miles on them from operating at ports and rail yards.

The goal is to push more than 30,000 heavily-polluting trucks to clean energy by 2035. Trucking industry officials say there is a big gap between the target and the charging infrastructure that barely exists today and would take years to build.

“Nobody is saying we don’t want to move to advanced technology,” said Matt Schrap, chief executive of the Harbor Trucking Association, an advocacy group that represents thousands of the state’s port truckers. Truckers can’t meet the deadline, he said, “because there’s no charging.”

The year 2035 is familiar because that is also the deadline by which Gov. Gavin Newsom (D) and CARB have declared that the state will no longer allow the sale of most gas-powered passenger vehicles, requiring drivers to purchase electric vehicles.

The state’s power grid currently lacks the capacity for a full shift to an electric fleet, so regulators are scrambling to plan the charging infrastructure and electricity transmission facilities required.

Earlier this year, state authorities advised the owners of electric vehicles not to charge them in the afternoon and evening hours during a heat wave, when solar panel would provide less power, creating a shortage.

California’s switch from fossil fuels to “renewable” energy sources has a negligible effect on global climate, partly because the state’s carbon savings are erased by rising fossil fuel use in China and developing countries.

On Friday, CNN security analyst Juliette Kayyem suggested making 26 the minimum age to purchase an AR-15. Kayyem made her comments after being asked … END_OF_DOCUMENT_TOKEN_TO_BE_REPLACED

The Walt Disney Company was expecting big things from their latest animated movie "Strange World," the House of Mouse's first movie to feature an … END_OF_DOCUMENT_TOKEN_TO_BE_REPLACED

(The opinions expressed by contributors are their own and do not necessarily represent the views of RedState.com.) While it hasn’t received much press … END_OF_DOCUMENT_TOKEN_TO_BE_REPLACED

Quick-thinking cops in St. Petersburg, Florida, are being praised for preventing a potential “mass … END_OF_DOCUMENT_TOKEN_TO_BE_REPLACED

Most Americans are not personally worried about contracting coronavirus, a survey from The … END_OF_DOCUMENT_TOKEN_TO_BE_REPLACED

Nearly a quarter of Americans said they have not been vaccinated against the Chinese coronavirus, a … END_OF_DOCUMENT_TOKEN_TO_BE_REPLACED