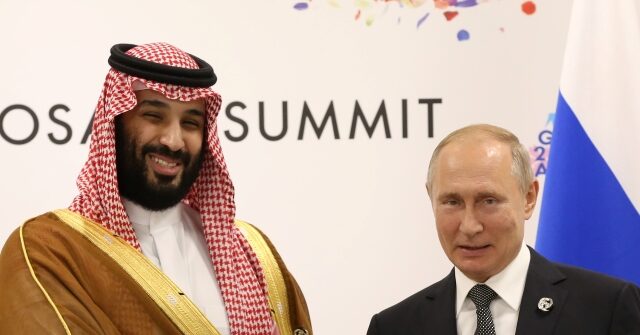 Saudi Crown Prince Mohammed bin Salman, who enjoys close relations with Russia and has overseen a reported increase in purchases of Russian oil, was “crucial” in brokering an agreement to release ten fighters captured fighting for Ukraine, Saudi Arabia’s top diplomat told the BBC on Friday.

The day before, the government of Ukraine announced a larger prisoner swap deal with Russia that resulted in 215 Ukrainians and the ten foreigners leaving Russian custody in exchange for the freedom of 56 Russians: 55 captured soldiers and pro-Russian Ukrainian oligarch Viktor Medvedchuk.

Both Ukrainian President Volodymyr Zelensky and Russian leader Vladimir Putin expressed gratitude to Saudi Arabia for playing a role in the exchange, particularly serving as a middle ground for the arrival of the ten freed foreigners.

Russia first invaded Ukraine in 2014, colonizing Ukraine’s Crimean peninsula and aiding pro-Russia separatists in the eastern Donbass region. In February, Putin greatly escalated the eight-year-old war with a full-scale assault on Ukraine, particularly targeting Kyiv and its outskirts, as well as southern regions around the port city of Mariupol.

Russia’s assault was met with disgust and condemnation from much of Western Europe and the United States. Washington and the European Union have attempted to enact sanctions that greatly reduced demand for Russian oil, and thus their price – inadvertently resulting in nations like China and India buying up large amounts of cheap Russian oil. Saudi Arabia, according to multiple reports by Reuters, has been among the nations to greatly increase its supply of Russian oil, selling the foreign product to its citizens while selling Saudi oil at a much higher price to foreign buyers.

Regarding the war, Riyadh has called for diplomacy and peace without declaring itself an ally of either party, maintaining lines of communication open with both Moscow and Kyiv.

“Prince Faisal described the release of detainees as ‘an important achievement’ and said he was pleased the 10 men were now returning to their families,” the BBC relayed, without quoting the foreign minister at length. “While Riyadh negotiated the release of the international prisoners it is understood Turkey mediated the exchange of the Ukrainian and Russian captives.”

The British network noted that Faisal dismissed allegations that Saudi Arabia was trying to find a role as a peacemaker in the conflict to mitigate the reputational damage it suffered following the gruesome murder of Washington Post contributor Jamal Khashoggi at a Saudi embassy in Turkey in 2018.

In separate remarks to Fox News, Faisal said bin Salman put effort into convincing Putin that the swap would help Russia in the long run.

“His Royal Highness was able to convince President Putin that this is a humanitarian gesture that is worthwhile, and this is how we achieved this result,” the foreign minister said. “His Royal Highness has always been convinced that dialogue is the primary avenue to resolve differences, and he made quite clear through the beginning of this conflict when he reached out to both President Putin and President [Volodymyr] Zelenskyy that we believe that there should be a negotiated settlement, and we continue to work towards that.”

“And I think that attitude allowed for a really transparent discussion and was able to facilitate this result,” he concluded.

Bin Salman’s office weighed in on Thursday, apparently eager to ensure the world knew of his role in the prisoner exchange, publishing a readout of a call that day between the crown prince and Zelensky.

“The Crown Prince affirmed the Kingdom’s keenness and support for all international efforts aimed at resolving the crisis politically, and stressed the continuation of efforts to contribute to alleviating the humanitarian consequences resulting from it,” according to the Saudi state news agency SPA.

Zelensky posted a note on Twitter confirming the conversation and thanking bin Salman “for facilitation in the release of foreign citizens, involvement in mediation and the leading role of Saudi Arabia in the region.” In a speech to Ukrainians, Zelensky also highlighted Saudi Arabia’s role in the affair.

“All of them will return home through the mediation of Saudi Arabia. I am sincerely grateful to everyone who contributed for your help!” Zelensky said, announcing 215 “pieces of good news.”

“The Ministry of Foreign Affairs expresses the gratitude and appreciation of the government of the Kingdom of Saudi Arabia to the Russian Federation and to Ukraine for their response to the efforts made by the Crown Prince for the release of the PoWs,” a formal statement issued Thursday read, according to Saudi news outlet al-Arabiya.

Bin Salman’s friendly ties to Putin appear to have played a role in the exchange. The crown prince has invested significantly in cooperation with Russia on the oil economy, notably scheduling a phone conversation with Putin in July after a visit to Saudi Arabia by leftist American President Joe Biden. Among the reasons Biden met with bin Salman in his home country, despite vowing to turn Saudi Arabia into a “pariah” state in the past, was to convince the country to increase its oil supply and drop prices, a request that has gone entirely ignored. Instead, Saudi Arabia has increased oil purchases from Russia, according to reports, essentially negating the effects of American sanctions on Moscow.

According to Reuters, Saudi Arabia more than doubled Russian oil imports between April and June 2022 compared to the same time period last year.

Saudi Arabia was primarily involved in the release of a group of foreigners who were fighting alongside the Ukrainians against Russia, including two Americans. According to Kyiv, the other eight prisoners released were British, Moroccan, Swedish, and Croatian.

In the early days of the war, Zelensky invited foreigners with combat experience to travel to Ukraine and aid the war effort, setting up an agency meant to screen volunteers and train them.

The family of one of the two freed Americans, U.S. Army veteran Alexander Drueke, expressed shock at Saudi Arabia’s role in his freedom.

“I never dreamed that it was a possibility that the Saudi government would be able to do something like this,” Drueke’s aunt said in remarks to the Washington Post. “But any port in a storm.”

A libertarian group filed a lawsuit on Tuesday challenging the legality of the Biden administration’s federal student loan forgiveness plan. The group … END_OF_DOCUMENT_TOKEN_TO_BE_REPLACED

When we last left Congressional representative Katie Porter (D-CA), RedState revealed that she benefited from lower-cost housing in the high-rent … END_OF_DOCUMENT_TOKEN_TO_BE_REPLACED

With a tempest bearing down on Florida Politico tries a pre-emptive hit on Governor DeSantis and drowns in failure. The press sometimes just cannot … END_OF_DOCUMENT_TOKEN_TO_BE_REPLACED

While normal people are watching the approach of Hurricane Ian towards Florida with dread, the national press seems downright excited that they might … END_OF_DOCUMENT_TOKEN_TO_BE_REPLACED

New York City has historically been the American city with the most gun control. Not only does state law hold there, but the city has its own brand of … END_OF_DOCUMENT_TOKEN_TO_BE_REPLACED

NASA successfully crashed a spacecraft into an asteroid Monday, in a demonstration of “the world’s … END_OF_DOCUMENT_TOKEN_TO_BE_REPLACED

Among the many anti-gun bills recently signed by California Gov. Gavin Newsom was a measure aimed at … END_OF_DOCUMENT_TOKEN_TO_BE_REPLACED

President Biden continues to look weak in front of world leaders. This is not only a bad look for … END_OF_DOCUMENT_TOKEN_TO_BE_REPLACED

In a court filing on Tuesday morning, the Pacific Legal Group filed the first lawsuit against the … END_OF_DOCUMENT_TOKEN_TO_BE_REPLACED