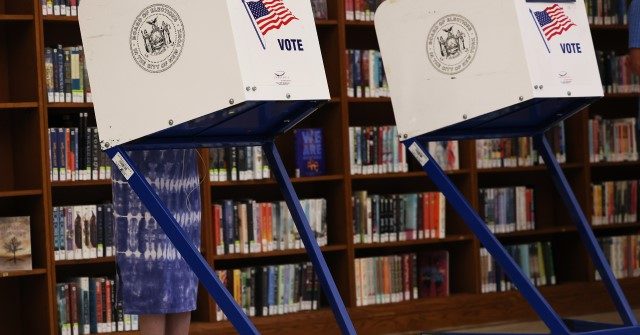 Voters in several states head to the polls on Tuesday in the final major primary election night before a few big elections upcoming in August, with Republicans hoping to keep momentum growing ahead of November and Democrats clamoring to hang on to the slivers of power they still have.

Several big states like New York, Illinois, and Colorado will select GOP and Democrat nominees in primaries on Tuesday, while other states like Utah and Oklahoma will do the same. Mississippi will hold a runoff election for the GOP primary for the district of Rep. Michael Guest (R-MS), who was surprisingly much weaker than expected in the primary’s first round a few weeks ago with challenger Michael Cassidy earning more votes than Guest the first go-around. Establishment Republicans have gone all in for Guest and tried to turn the tide against Cassidy, so Tuesday’s results will show whether they were successful or whether Cassidy was able to harness his shocking first round performance into a formal nomination win.

The first primary elections since the U.S. Supreme Court overturned Roe v. Wade nearly 50 years after the Court first made the ruling will also provide evidence as to whether or not the left has newfound energy heading into this all-important midterm election season.

Voters in New York will select a GOP nominee for governor. Rep. Lee Zeldin (R-NY) is easily the favorite but faces several challengers, including former New York City mayor Rudy Giuliani’s son Andrew Giuliani and businessman Harry Wilson. The winner of the GOP nomination for governor is likely to face incumbent Democrat Gov. Kathy Hochul in November. Hochul rose to the position when her predecessor Andrew Cuomo resigned in disgrace.

Several congressional primaries in both parties are worth watching here, too, as Republicans battle to succeed retiring Rep. Chris Jacobs (R-NY) upstate, and downstate Democrats have an internecine member-member primary battle between Reps. Jerry Nadler (D-NY) and Carolyn Maloney (D-NY)–two committee chairs forced to run against each other due to redistricting.

In Illinois, Republicans will select nominees for both the governor and Senate races–which could become competitive in November with the current environment. Republicans have won statewide in Illinois in recent years, so that remains a possibility. But more importantly, GOP primary voters will decide a member-member primary caused by redistricting between Reps. Mary Miller (R-IL) and Rodney Davis (R-IL). Former President Donald Trump has gone all in for Miller and hosted a rally with her this weekend.

Colorado voters will decide several key primaries, including who the GOP nominee for U.S. Senate will be. In Utah, Sen. Mike Lee (R-UT) aims to hold off a primary challenger while he prepares for a general election battle with Never Trumper Evan McMullin–and Democrats appear to be colluding with McMullin to influence the outcome of the election in a desperate ploy to beat Lee.

Oklahoma, meanwhile, has both U.S. Senate seats up this year with the looming retirement of Sen. James Inhofe (R-OK). Sen. James Lankford (R-OK) aims to hold off a primary challenger, while Rep. Markwayne Mullin (R-OK) appears from public polling to be the frontrunner in the GOP primary to succeed Inhofe.

The polls close in Mississippi, Illinois, and Oklahoma at 8 p.m. ET,  New York and Colorado at 9 p.m. ET, and in Utah at 10 p.m. ET. South Carolina also has runoffs scheduled for Tuesday–and the polls close there at 7 p.m. ET–but there are no major races of national political importance there this week.

Follow along here for live updates as the results pour in from across the country.

In the GOP primary for U.S. Senate in Illinois, Kathy Salvi holds an early lead with 4 percent reporting. Her more than 10,000-vote lead is nearly 30 percent better than the second highest vote-getter Peggy Hubbard at this time.

With 1 percent reporting in the 15th district GOP primary in Illinois, Rep. Rodney Davis (R-IL) has a slight lead over Rep. Mary Miller (R-IL). This is a banner race GOP primary between two members.

The very first results are pouring in from across the country. In Mississippi, with less than 100 votes in, Guest has an early lead.

From Trump’s team, this is the list of endorsements he has on the line tonight:

The polls have closed in Mississippi, Illinois, and Oklahoma. Results should be coming in imminently in each place.

A would-be gas thief paid dearly for his misdeed over the weekend, catching fire as he drilled a hole in a truck’s gas tank at a Salt Lake City business.

It all was caught on surveillance video in broad daylight Saturday morning, KSL-TV reported — fittingly at Summit Fire & Security.

Video shows the crook underneath a work truck on the side where the gas tank is located, the station said, adding that a white pickup truck is parked next to the work truck.

Suddenly the thief pops up with his shirt on fire and emerges in front of both trucks, rolling on the surface of the parking lot in an attempt to extinguish the flames.

The guy rolled about 10 times before the flames were out, after which he ditched his charred shirt and ran into the white pickup truck that the driver drove forward to pick him up.

The below screenshot shows what appears to be a red gas container left behind under the truck, as smoke billows from the bottom — and the hapless would-be thief about to remove his shirt:

“Some people try to take the easy way out of everything,” Branch Manager Travis Mills told KSL as the surveillance clip ran.

Mills added to the station that the crook “tried to siphon gas out of it, and he wasn’t getting the siphon to work. So he decided to drill the gas tank, and that’s when he caught on fire.”

He added to KSL that “the reason why he’s fleeing is that, if there were more gas in it than a gallon, this thing would have absolutely turned into a bomb. It’s sad because times are tough for a lot of people, but it’s not worth the $5 that he would have saved for the the injury that the guy sustained.”

In addition, the company has suffered multiple catalytic converter thefts and smash-and-grab thefts in recent years, the station said.

The outfit even installed a $30,000 security system prior to Saturday’s incident, KSL reported: “It’s been expensive,” Mills added to the station.

Now, the attempted gas theft is setting them back financially even more.

The truck is now off the road due to its damaged gas tank, KSL said, and replacing the tank will be costly — if a replacement tank can be found.

“Horrendous expense,” Mills added to the station. “We have downtime with our guys, immediately.”

Tony Allred, division chief for the Salt Lake City Fire Marshal told KSL “given the gas prices in the valley and nationwide, we are seeing an increase in gas theft.”

Allred added to the station that “drilling into a tank is extraordinarily dangerous,” as the drill, drill bit, or even static electricity could spark an explosion.

‘Zackly. What could possibly go wrong? Moreover, it’s not like some of us haven’t predicted it from the very beginning. TikTok, the popular … END_OF_DOCUMENT_TOKEN_TO_BE_REPLACED

The New York Times reports that police are seeking a 22-year-old white man in connection with the July 4 Highland Park attack. The individual is … END_OF_DOCUMENT_TOKEN_TO_BE_REPLACED

We’ve seen a lot of the left losing their minds over the Supreme Court’s decision to overturn Roe v. Wade while Democratic lawmakers have done all … END_OF_DOCUMENT_TOKEN_TO_BE_REPLACED

It’s difficult to be impressed by anything the Biden-Harris Administration is up to these days, but … END_OF_DOCUMENT_TOKEN_TO_BE_REPLACED

There are 91 U.S. military veterans in the 117th Congress: 17 serve in the Senate, 74 serve in the … END_OF_DOCUMENT_TOKEN_TO_BE_REPLACED

Happy Independence Day, Americans! On today’s podcast, I talk about one of the greatest recent … END_OF_DOCUMENT_TOKEN_TO_BE_REPLACED

Progressives accuse conservatives of single-handedly killing American democracy. And unless you are … END_OF_DOCUMENT_TOKEN_TO_BE_REPLACED