Ukrainian Interior Ministry adviser Anton Gerashchenko told the U.K. Daily Mail in an article published Wednesday that Ukrainian “intelligence services” were killing Ukrainians suspected of collaborating with the Russian military “like pigs” in areas where Kyiv has pushed back the ongoing invasion.

The British newspaper highlighted multiple examples of individuals — civilians with backgrounds such as chicken farm security guard and alleged pedophile — currently in Ukrainian custody and facing prosecution for aiding the Russian invasion. Those cases, where some form of legal process appears to be in place, contrast significantly with Gerashchenko’s insistence that Ukrainian law does not protect collaborators and that the government is actively encouraging extrajudicial killings.

Russia invaded Ukraine in early 2014, colonizing its Crimean peninsula with little interest from then-President Barack Obama or the greater West. Russian strongman Vladimir Putin expanded what became an eight-year-old war in the Ukrainian Donbas region, which borders Russia, this February, announcing a “special operation” to eradicate alleged “Nazism” in Ukraine by overthrowing President Volodymyr Zelensky. Zelensky, who is Jewish and lost family in World War II, has expressed outrage and disgust at the accusations.

This time, unlike under the Obama presidency, the administration of leftist President Joe Biden and allies in Europe have reacted to Russia’s escalation by pouring billions of dollars into the Ukrainian military and implementing sanctions on the Russian economic, which have led Russia to expand trade ties with third-party nations such as India and Brazil.

The Daily Mail highlighted the harrowing situation in Balakliya, eastern Ukraine, where the reported discovery of a Russian torture chamber at a local police station following the ouster of Russian forces has prompted civilian outrage and retaliation. Russian occupiers spent about six months running Balakliya; Zelensky announced the full liberation of the town on September 8, according to Ukrainian state media outlet Ukrinform. 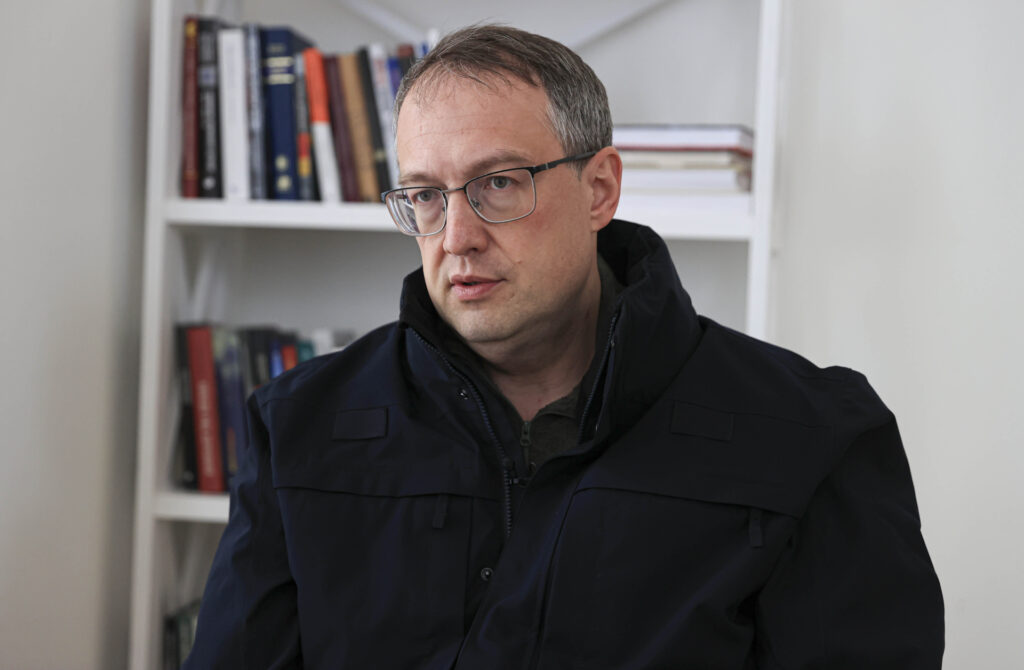 The newspaper claimed that Ukrainian officials are compiling lists of alleged collaborators and quoted the Interior Ministry official as stating that a “hunt” was on to kill them.

“A hunt has been declared on collaborators and their life is not protected by law,” the Daily Mail quoted Gerashchenko as saying. “Our intelligence services are eliminating them, shooting them like pigs.”

Gerashchenko, an active Twitter user, has not shared the remarks in the Daily Mail interview on his social media profile at press time, though he has discussed the situation in Balakliya.

She never stopped believing Ukrainian soldiers would free them. When they arrived, she was so happy to treat them with all she had – homemade pancakes.

Glory to our Heroes!

Another unnamed Ukrainian official referred to the targeted individuals, mostly identified as civilians, as “losers.” The alleged collaborators are reportedly facing retribution because Russia did not allow them to cross the border.

The documents allegedly shared by Ukrainian government officials appeared to confirm at least 29 “retribution killings.” Elsewhere, the newspaper identified another 29 “suspicious deaths” of individuals suspected of aiding the Russians.

The Ukrainian officials’ attitude towards collaborators in the Daily Mail report is reflected in past public statements emphasizing the importance of neutralizing the threat of alleged traitors, with or without due process.

“If I could have the opportunity to check all of our country’s citizens for involvement in cooperation with the Russian Federation, I would definitely do it, because this is a very dangerous situation,” National Defense Secretary Oleksiy Danilov said in August, appearing to encourage aid from the public in helping find collaborators. “And it doesn’t matter where those moles are today. We need to find and ‘poison’ these rats.”

“We need to ensure that none of them remain on our territory. This is a matter of our national security. And their presence in any agencies is very, very dangerous. Why? Because the Russian Federation does not give up hope of achieving its main goal — to destroy us as a state,” Danilov asserted, according to Ukrinform.

At the onset of the war escalation in February, Zelensky announced that the government would hand out firearms to any civilian seeking to aid in fighting Russia; in less than a month, Ukrainian officials said they had distributed 18,000 firearms to civilians. Ukrainian officials have also enabled the civilian capture of Russian military equipment by announcing in March that civilians do not need to declare Russian tanks or other valuable items in their taxes.

As of September, Ukraine’s State Bureau of Investigation (SBI) had announced 881 legal cases related to charges of “high treason” and “collaborative activities.”

“As noted, 315 people were served with notice of charges, 216 people were put on a wanted list. In addition, 1,164 people are being checked for involvement in treason and collaborative activities,” Ukrinform reported last month. “Most cases were opened in Donetsk, Luhansk, Kherson regions, and Kyiv city.”

Zelensky appeared to hint in remarks in April, in which he announced legal processes against two generals stripped of their rankings in response to alleged evidence of treason, that extrajudicial handling of such accusations would be deemed necessary.

“Regarding antiheroes. Now I do not have time to deal with all the traitors. But gradually they will all be punished,” Zelensky said, announcing, “the ex-chief of the Main Department of Internal Security of the Security Service of Ukraine Naumov Andriy Olehovych and the former head of the Office of the Security Service of Ukraine in the Kherson region Kryvoruchko Serhiy Oleksandrovych are no longer generals.”

In July, Zelensky also moved to strip Prosecutor General Iryna Venediktova and Security Service Head Ivan Bakanov of their titles in response to hundreds of cases of alleged treason under their leadership.

“Such an array of crimes against the foundations of the country’s national security and the connections that have been exposed between the employees of the security agencies of Ukraine and Russia’s special services rise very serious questions to the relevant leaders,” Zelensky said at the time. Observers deemed the move particularly dramatic as Bakanov was a childhood friend of Zelensky’s.
The latest announcement of a high-profile potential treason case was reported on Thursday, according to Ukrinform, implicating lawmaker Renat Kuzmin. The Ukrainian SBI formally accused Kuzmin of “high treason” on Monday for sharing social media posts deemed to be pro-Russia.

“In particular, starting in March 2021 and even after Russia’s full-scale invasion of Ukraine, Kuzmin voiced propaganda narratives in his addresses, messages on social networks, and on his own website,” Ukrinform claimed. “The purpose of posting such statements was to shape up anti-Ukrainian sentiment in society and exert media influence to the detriment of the sovereignty, territorial integrity, inviolability, and security of the state.”

While international law allows for due process trials for alleged collaborators, the situations described by the Daily Mail in which the Ukrainian government appears to be encouraging the extrajudicial execution of civilians may run afoul of war crimes. As dictated by the Rome Statute, warring parties are considered to be engaging in criminal behavior if engaging in the “willful killing” of protected persons, which includes civilians. The Rome Statute also explicitly outlaws “intentionally directing attacks against the civilian population as such or against individual civilians not taking direct part in hostilities.”

Enablers of the opposing warring party or collaborators represent a gray area in international law, not explicitly identified in the Rome Statute as protected parties but also not falling into the category of formal combatants, rendering them civilians.

Ukraine is not a party to the Rome Statute. War crimes, however, are considered part of a small group of laws known as “peremptory norms” in international law, meaning any court anywhere has the jurisdiction to enforce them.

Human rights organizations have denounced Russia for widespread evidence of the mass killing of civilians in Ukraine.

“In recent weeks, we have gathered evidence that Russian forces have committed extrajudicial executions and other unlawful killings, which must be investigated as likely war crimes,” Amnesty International Secretary-General Agnès Callamard denounced in May.  “The intentional killing of civilians is a human rights violation and a war crime. These deaths must be thoroughly investigated, and those responsible must be prosecuted, including up the chain of command.”

Kanye West said Thursday on FNC’s “Tucker Carlson Tonight” that he liked Donald Trump. West said, “It was wild that I didn’t know how close my … END_OF_DOCUMENT_TOKEN_TO_BE_REPLACED

Drag queen "Lil Miss Hot Mess" is accusing Republican Sen. Marco Rubio of "bigotry" after the lawmaker from Florida called out the radical left in a … END_OF_DOCUMENT_TOKEN_TO_BE_REPLACED

Google is celebrating the news that Velma, one of the main characters from the widely-beloved world … END_OF_DOCUMENT_TOKEN_TO_BE_REPLACED

While I didn’t think it possible, the Democrats have found one more way to degrade and demean … END_OF_DOCUMENT_TOKEN_TO_BE_REPLACED

Ah, Joe Biden. He’s a continuing font of gaffes. A lot of the time, he seems to have no idea what he … END_OF_DOCUMENT_TOKEN_TO_BE_REPLACED