After two consecutive winters of drought, Californians are hoping that a new forecast for heavy rain will be fulfilled. The San Francisco Chronicle reported Wednesday that a storm could bring two inches of rain to the state October 20 through 24.

There’s a chance the Bay Area could see above-normal rainfall this month that would slightly improve drought conditions and potentially put an end to the region’s wildfire season, according to meteorologists.

A storm system over the northeastern Pacific Ocean could bring as much as 2 inches of rain from the Bay Area up to Redding from Oct. 20-24.

The heavy rainfall would be “possible near-record-breaking precipitation for late October,” according to the National Weather Service’s Climate Prediction Center.

On Thursday, meanwhile, residents of Southern California are bracing for Santa Ana winds that bring warm air and strong gusts to the region, potentially fanning the flames of wildfires, including the ongoing Alisal Fire near Santa Barbara.

As Breitbart News reported Wednesday, that blaze threatens the historic Reagan Ranch, where the 40th president and his wife used to vacation, and where young conservative activists participate in educational programs today.

The ongoing drought has seen massive wildfires, as water levels drop to extreme levels in the state’s dams, cutting farmers off from state and federal water supplies, and forcing the shutdown of hydroelectric plants. The state has not built new reservoir capacity in four decades.

The Alisal fire in Santa Barbara County, California, is threatening the ranch once owned by late President Ronald Reagan, and firefighters are working to save the “Western Whitehouse.”

The 688-acre ranch, dubbed Rancho del Cielo, served at a vacation home for Reagan and first lady Nancy Reagan during his time as president.

Deadline reported on the development:

The Reagans bought the ranch in 1974, as his term as governor was ending. It served as a western White House during his presidency, hosting a number of world leaders. The property was sold to the conservative Young America’s Foundation in 1998.

“YAF leadership is working with Congressional allies and other leaders who are their offering support in acquiring resources to help fight this fire,” the foundation said in a statement, adding that there were several fire engines on the property and fire retardant was being sprayed around the structures. The foundation also was working to provide access to emergency crews to two lakes at the ranch that contain more than one million gallons of water.

Scott Walker, former governor of Wisconsin and president of the foundation, said his organization has “taken the necessary steps, as much as a property owner can do, to shield Rancho del Cielo from this very threat. I have confidence our team and the emergency crews will do everything they can to protect Rancho del Cielo and the surrounding area.” 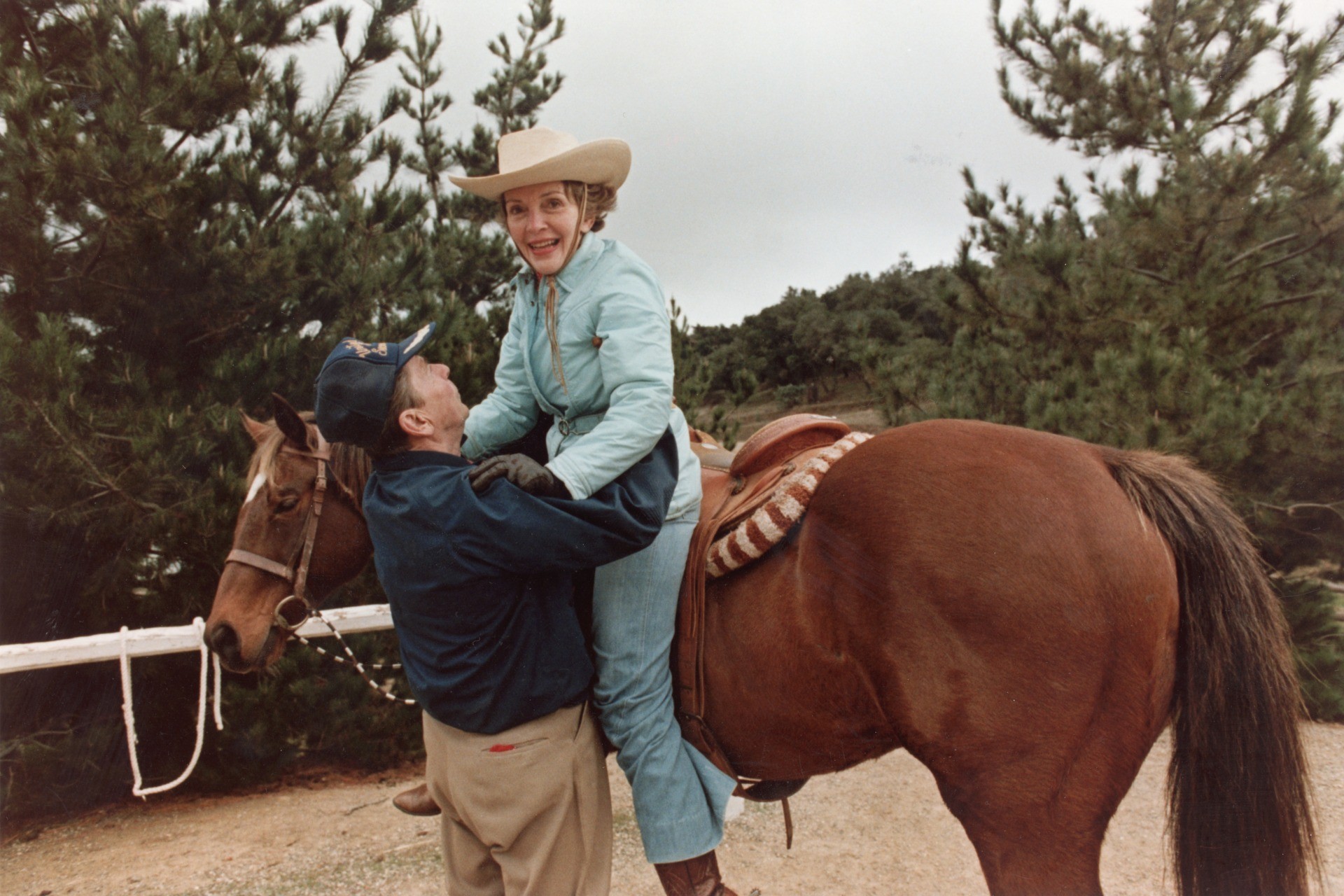 November 26, 1981: US president Ronald Reagan lifts First Lady Nancy Reagan down from the saddle of her horse after riding at Rancho Del Cielo, California. She wears a cowboy hat strapped around her chin. (Photo by Ronald Reagan Library/Getty Images)

The NBC affiliate WSLS in Virginia reported on the fire:

A major highway in Southern California coastal mountains remained closed Wednesday and evacuation orders were in place as a growing wildfire chewed through dry vegetation in the region. More than 760 firefighters battled the Alisal Fire, which covered 21 square miles (54 square kilometers) along the south Santa Barbara County coast and was only 5 percent contained, county fire officials said.

The fire erupted Monday on a ridge and swept toward the ocean, forcing the closure of U.S. 101, the only major highway on that section of the coast. Evacuation orders and warnings were in place for ranches and several rural communities.

“While the area is lightly populated, the blaze burning in dense chaparral threatened more than 100 homes, ranches and other buildings,” the report concluded.

President Joe Biden appeared to violate the citywide mask mandate in Washington, DC, over the weekend. In a video posted to social media, the … END_OF_DOCUMENT_TOKEN_TO_BE_REPLACED

The Justice Department’s “National Strategy for Countering Domestic Terrorism” laid out by U.S. Attorney General Merrick Garland in June as well as … END_OF_DOCUMENT_TOKEN_TO_BE_REPLACED

Apparently, unruly behavior at NFL games is not strictly an American phenomenon after British NFL fans began pelting the field with bottles and cups … END_OF_DOCUMENT_TOKEN_TO_BE_REPLACED

More than 16,000 migrants who tested positive for COVID-19 while in Immigration and Customs … END_OF_DOCUMENT_TOKEN_TO_BE_REPLACED

A viral video shows a Washington state trooper saying “Jay Inslee can kiss my ass,” during his … END_OF_DOCUMENT_TOKEN_TO_BE_REPLACED

China launched a nuclear-capable hypersonic missile into space that circled the Earth, according to … END_OF_DOCUMENT_TOKEN_TO_BE_REPLACED

“If it’s Sunday, it’s ‘Meet the Press.” The venerable sign-off of the longest-running television … END_OF_DOCUMENT_TOKEN_TO_BE_REPLACED

For more than a day, whenever I clicked on far-left Variety, the TOP STORY was about some Woke … END_OF_DOCUMENT_TOKEN_TO_BE_REPLACED

Hillary Rodham Clinton has released a novel under her name, State of Terror, in which critics claim … END_OF_DOCUMENT_TOKEN_TO_BE_REPLACED