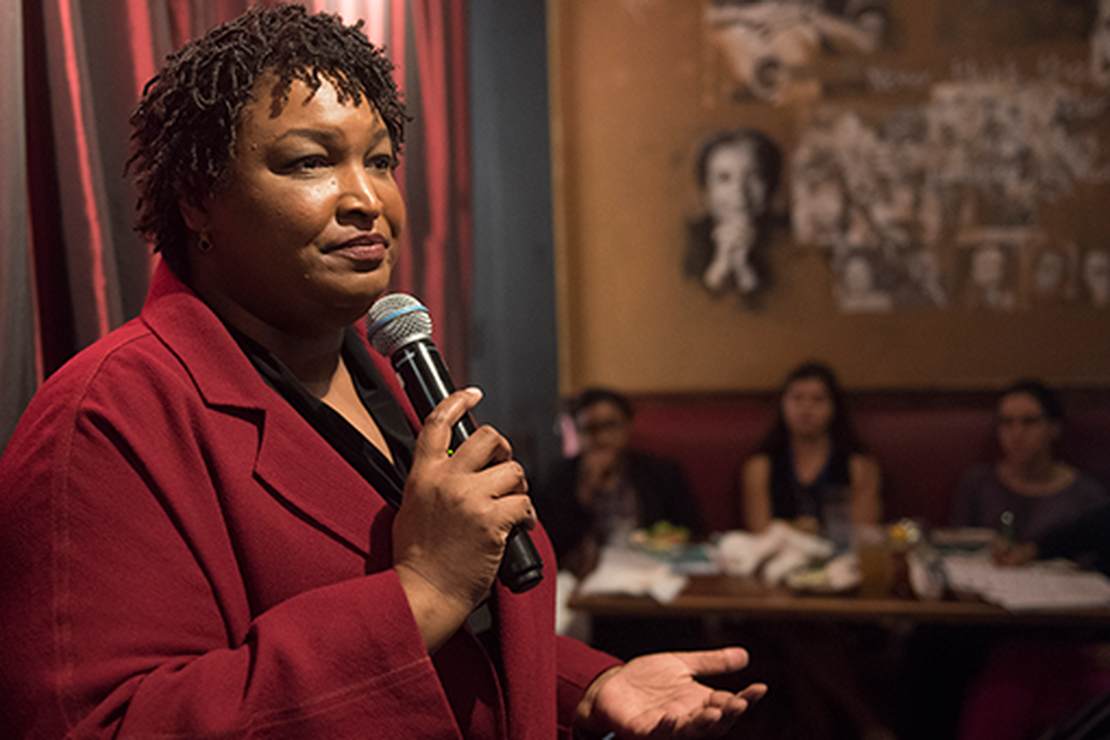 As we previously reported, Georgia Democratic gubernatorial nominee Stacey Abrams is on the ropes big time in her second effort at trying to defeat Republican Gov. Brian Kemp, and when Democrats are desperate they usually end up doing pretty desperate things.

And that’s exactly what Abrams did Tuesday in startlingly illuminating comments regarding her position on abortion. As my RedState colleague, Bonchie wrote earlier, Abrams declared the assertion that the fetal heartbeat begins at six weeks to be a lie that was allegedly “manufactured” by the patriarchy because they want to control women or something.

“It is a manufactured sound designed to convince people that men have the right to take control of a woman’s body,” Abrams, who supports abortion up until birth, declared at an Atlanta event.

On Twitter, she made matters worse for herself by suggesting it was important that black women, in particular, be allowed to abort at any stage of pregnancy because “Outlawing abortion perpetuates the cycle of poverty that disproportionately affects Black + Brown women & harms our economy.”

I must confess I didn’t have “Stacey Abrams says women of color should be allowed to abort their unborn children to save the economy” on my bingo card, but here we are.

Predictably, the Washington Post’s Glenn Kessler, who we’ve been reliably told is a “fact-checker” for the newspaper, tried rushing to Stacey Abrams’ rescue by claiming she wasn’t wrong, at least on when the fetal heartbeat begins:

FWIW, “fetal heartbeat” is a misnomer. The ultrasound picks up electrical activity generated by an embryo. The so-called “heartbeat” sound you hear is created by the ultrasound. Not until 10 weeks can the opening and closing of cardiac valves be detected by a Doppler machine. …

He then laughably offered up a link to an NPR “report” on the issue thinking it backed up his claim. It didn’t, which we’ll get to in a minute.

As you might imagine, Kessler was ripped to shreds by people who took him to task not just for the characterizations he used but also over his supposed “facts,” which as it turns out weren’t “facts” at all.

Up until about two months ago, Planned Parenthood of all places had the inconvenient facts about when a fetal heartbeat begins on its website:

Stacey Abrams: “There’s no such thing as a heartbeat at six weeks”

There was also this brutal thread from radiologist Pradheep Shanker that demolished Kessler’s argument and similar arguments made by pro-abortion leftists on the fetal heartbeat issue. Sharing some of the highlights from it below.

“Glenn… This is scientifically and medically incorrect. 100%. Ultrasound can’t detect electrical activity. Who told you otherwise?” Shanker asked before noting that “The NPR link you cited is WRONG.”

“Ultrasound only detects density and motion. It cannot detect any electrical activity at all. This is a scientific fact,” Shanker tweeted.

“It is true that the valves in the heart develop later. However, the cardiac muscles that are located in the embryological heart are contracting. They are in fact moving inward and outward. That is how you define a beat,” he went on to say.

Before urging Kessler to delete his tweets and “issue an apology because this is really a pathetic scientific document,” Shanker continued to dive deeper into the science.

“[Is] the beat the same as a fully grown adult beat? Of course not. We’re talking early [in] biological development. However, the cardiac tissue is contracting, which is literally what a beat is. To say otherwise is scientific misinformation, and cannot be treated otherwise. ”

Most importantly, the video and audio proof is there for all the world to see:

So as it turns out, Kessler was just as wrong as Stacey Abrams was. One thing he neglected to fact check, however, was the rest of her her statement where she talked about how the fetal heartbeat argument was supposedly a weapon of the patriarchy, as former NRSC advisor Matt Whitlock observed.

“What about the idea that what many doctors (and Johns Hopkins School of Medicine) call a heartbeat is ‘a manufactured sound designed to convince people that men have the right to take control of a women’s body’ as Abrams alleges?” Whitlock asked.

Though we have no independent confirmation, rumor has it that Kessler has been too busy to answer inquiries because he’s trying to re-attach his patootie after it was handed to him in this debate. So I’d say the chances of him answering the question are low, about as low as his knowledge base is on fetal heartbeats.

Kanye West said Thursday on FNC’s “Tucker Carlson Tonight” that he liked Donald Trump. West said, “It was wild that I didn’t know how close my … END_OF_DOCUMENT_TOKEN_TO_BE_REPLACED

Drag queen "Lil Miss Hot Mess" is accusing Republican Sen. Marco Rubio of "bigotry" after the lawmaker from Florida called out the radical left in a … END_OF_DOCUMENT_TOKEN_TO_BE_REPLACED

Google is celebrating the news that Velma, one of the main characters from the widely-beloved world … END_OF_DOCUMENT_TOKEN_TO_BE_REPLACED

While I didn’t think it possible, the Democrats have found one more way to degrade and demean … END_OF_DOCUMENT_TOKEN_TO_BE_REPLACED

Ah, Joe Biden. He’s a continuing font of gaffes. A lot of the time, he seems to have no idea what he … END_OF_DOCUMENT_TOKEN_TO_BE_REPLACED