On Wednesday, fighting between Azerbaijani and Armenian forces in the separatist enclave of Nagorno-Karabakh threaten to spread into a larger war.

As the Soviet Union wound down, war broke out between Armenia and Azerbaijan, resulting in a sweeping victory by Armenia in 1994 after a six-year war. Nagorno-Karabakh gained autonomy in 1994 as the “Republic of Artsakh.” The Lachlin Corridor corridor was created, allowing overland travel from Nagorno-Karabakh to Armenia.

Since that time, no one has been happy with the results. The government of Nagorno-Karabakh has been accused of a below-the-radar ethnic cleansing, allegedly expelling several hundred thousand ethnic Azerbaijanis.

The area has also been the scene of the third-rate knock-off of great power completion. The Azerbaijan government is supported by Turkey probably because of pique over not solving the “Armenian problem” in 1915. Russia and Iran support Armenia. Iran has a very real stake in the struggle as Azerbaijan shares a long border with Iran, and the area is overwhelmingly Azerbaijani. Russia, naturally, imagines it has special authority because of the “sphere of influence” bullsh** we’re supposed to nod our heads to when it is mentioned.

In 2020, Azerbaijan and Armenia fought a six-week war called the September War. Azerbaijan won a victory that stopped just short of annihilating the Republic of Artsakh. As you can see on the below map, yellow represents the area that Artsakh ceded to Azerbaijan. The bluish area is territory captured by Azerbaijan but still claimed by Artsakh. The orange area is what remains of Artsakh. The Russians have about 2,000 troops inside Artsakh as a “peacekeeping” force. 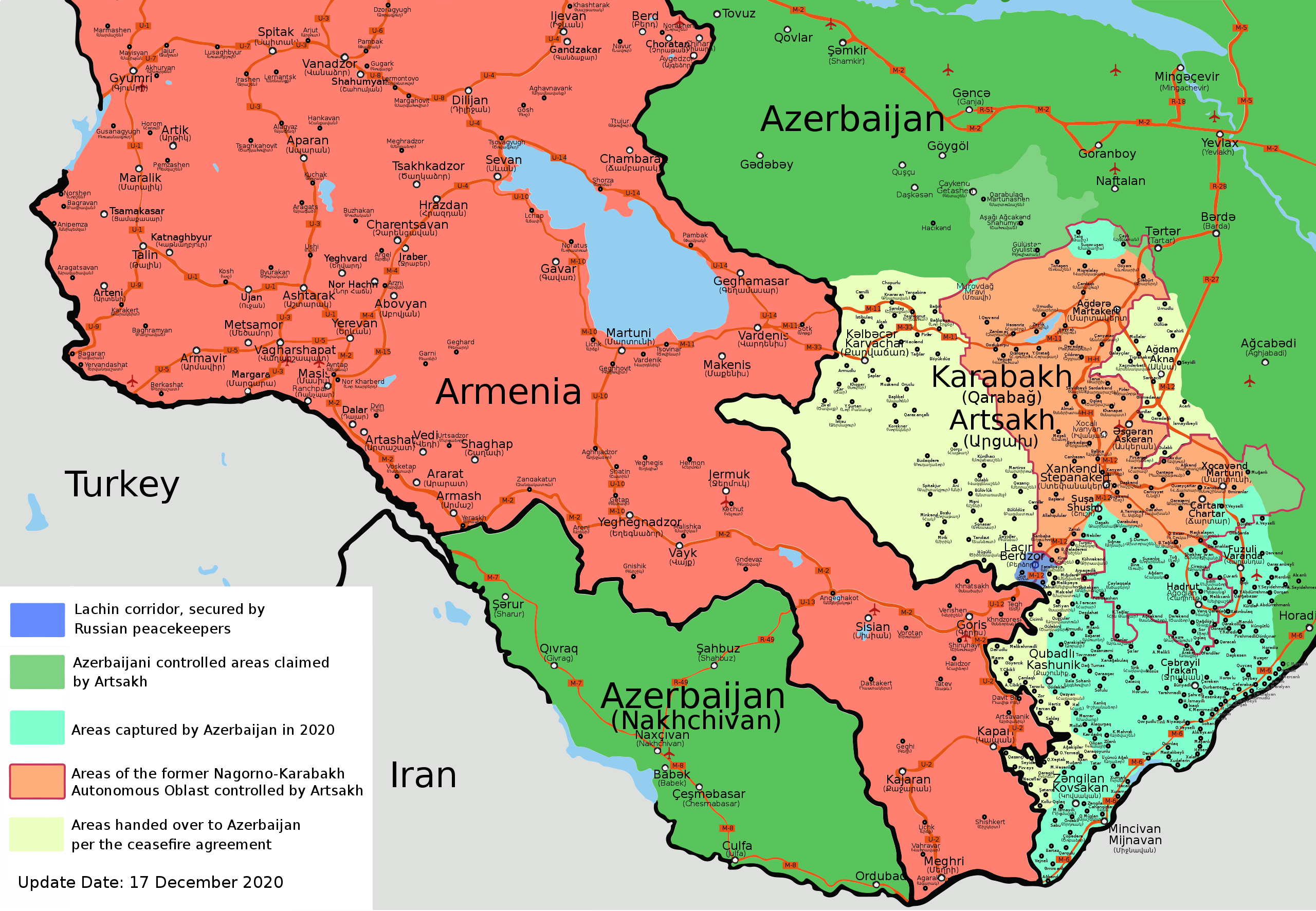 The current iteration of this ongoing conflict kicked off on Wednesday when Azerbaijan claimed that one of its soldiers had been killed. It retaliated with a drone strike killing two Armenians. Below you can see an Azerbaijani drone, probably a Turkish Bayraktar, striking Armenian troops.

The president of Artsakh has called for “full mobilization.” Iran is sending troops to the border.

Iranian military vehicles moving toward toward the border with Azerbaijan tonight as large-scale fighting erupted earlier in the day between the Armenian and Azerbaijani armies. pic.twitter.com/rZQesA288k

I don’t think anyone is really sure how this plays out. Azerbaijan has shown it can overmatch the Russian-backed separatists of Artsakh. Fourteen hundred Russian “peacekeepers” is not a lot of men to stop a war. Moreover, Azerbaijan is rightfully not worried about Russian intervention. The Russian armed forces have discredited themselves in Ukraine to the point where no one fears them. If Azerbaijan is determined to press the issue, the Russian peacekeeping force is meaningless. While Iran moving equipment to the border might be an ego boost for regime supporters, the Iranian military is barely competent to fight ISIS. It definitely is not in the same league as either Azerbaijan or Armenia. Azerbaijan has spent the past few years building closer ties to the West. In 2019, Azerbaijan sent a delegation to the Warsaw Conference, where it voted to label Iran as a sponsor of terrorism. It has also signed an agreement with the EU to supplant Russia as a source of natural gas.

The EU reached a deal today with Azerbaijan to increase gas purchases through the Southern Gas Corridor from 8 bcma (billion cubic meters per year) to 20 bcma by 2027.

2027 is also the year by which the EU is supposed to have phased out Russian gas completely. pic.twitter.com/RvSHvCR5wx

In short, if war breaks, Armenia and the separatist state of Artsakh will find themselves completely isolated. By hitching its wagon to a Russia-Iran coalition, Armenia has deprived itself of anyone who will support it. The EU is not taking sides in this flare up as you can see by the butthurt from this pro-Armenia account:

2) In “Nagorno Karabakh” not “the South Caucasus.”

4) Committed to “Azerbaijani gas/oil” not “peace in the region.” pic.twitter.com/XuDvQx6q9K

Turkey, Israel, and the US have military aid agreements with Azerbaijan. Armenia has 1,400 Russian peacekeepers and jacksh** otherwise. Armenia is keenly aware of this as it is trying to open negotiations with Turkey to reestablish diplomatic recognition and open the Armenia-Turkey border; both were severed after the first war between Armenia and Azerbaijan. Turkey, however, has linked any movement in that direction with face-to-face negotiations by Armenia with Azerbaijan.

As Russia becomes more and more bogged down in Ukraine, look for more of this on Russia’s periphery. As Russia recedes from world power status, its ability to control the actions of neighboring states will be reduced, and more regional actors will step up to intervene in those conflicts without regard to Moscow’s desires.

Days after House Speaker Nancy Pelosi enraged Chinese officials with a trip to Taiwan, a congressional delegation made an unannounced two-day visit of … END_OF_DOCUMENT_TOKEN_TO_BE_REPLACED

Welp, now it’s getting really interesting, America. “It,” of course, being the FBI raid on Donald and Melania Trump’s private residence at Mar-a-Lago. … END_OF_DOCUMENT_TOKEN_TO_BE_REPLACED

Levi Strauss & Co. heir Dan Goldman has reportedly thrown millions of dollars from his own … END_OF_DOCUMENT_TOKEN_TO_BE_REPLACED

EAGLE PASS, Texas — Within the course of a few short hours, nearly 700 migrants waded across the Rio … END_OF_DOCUMENT_TOKEN_TO_BE_REPLACED

President Joe Biden rode his bike in front of reporters again on Sunday, this time peddling along … END_OF_DOCUMENT_TOKEN_TO_BE_REPLACED

I remember asking early on in the pandemic, “if masks and lockdowns work so well, why aren’t they, … END_OF_DOCUMENT_TOKEN_TO_BE_REPLACED

The older brother of a U.S. Marine who was killed during the tumultuous U.S. withdrawal from … END_OF_DOCUMENT_TOKEN_TO_BE_REPLACED

One person is dead, and 17 others are injured after a driver crashed his vehicle into a crowd of … END_OF_DOCUMENT_TOKEN_TO_BE_REPLACED