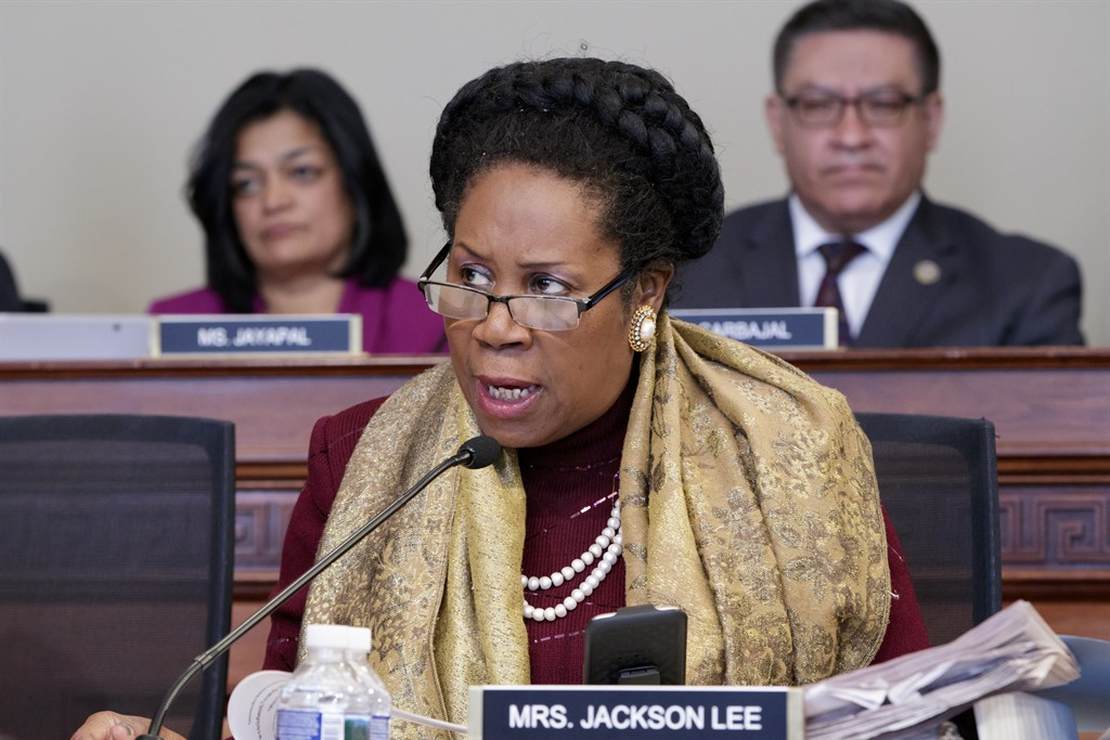 You can’t make it up. Thankfully, veteran race-hustler Texas Rep. Sheila Jackson Lee can and just did. Democrats in general are phenomenal at connecting dots that don’t exist, but Jackson Lee can connect virtually anything to “racism” in fewer dots than most — except for MSNBC’s Joy Reid, of course.

In her latest display of ninja-like mastery, Jackson Lee, on Thursday, drew a ridiculous connection between COVID and slavery during a disjointed speech on the House Floor as she once again called for reparations, as reported by The Blaze. While she claimed her spiel wasn’t accusatory (of course, it was) and only about “reconciliation,” “restoration,” and “repair,” her words were as delusional as— well, as delusional as SJL always is — and with a straight face, mind you:

Therefore, she claimed: “Reparations are curative; they’re not punishment.”

Rep. Sheila Jackson Lee (D-TX) gives powerful support for reparations for descendants of those enslaved in the U.S.:

“You did not see us attack this most solid and somber institution — sacred — on January 6, 2021. We were not the masses that were trying to undermine democracy.” pic.twitter.com/TVED0whyKV

Jackson Lee cited a Harvard Medical School study and claimed that “reparations for African-Americans could have cut COVID-19 transmission and infection rate, both among blacks and the population at large.”

Not that I distrust everything that comes out of Sheila Jackson Lee’s mouth, but I decided to do a bit of digging on my own. You know, that “trust but verify” thing. Anyway, several Harvard Medical School references to COVID and race disparity pop up on Google, including Pandemic Inequality, with the subhead: Study IDs racial, ethnic disparities in hospital mortality for COVID, non-COVID patients.

During the COVID-19 pandemic, Hispanic Medicare patients hospitalized with COVID-19 were more likely to die than non-Hispanic white Medicare beneficiaries, according to a study led by researchers from the Department of Health Care Policy in the Blavatnik Institute at Harvard Medical School.

The analysis also found that existing pre-pandemic racial and ethnic disparities in hospital mortality widened during the pandemic—an exacerbation that was fueled by a widening gap between deaths of Black and white people, the researchers said.

The analysis measures racial and ethnic disparities in death and other hospital-based outcomes for both COVID-19 and non-COVID-19 patients based on an examination of complete hospitalization data for Medicare beneficiaries nationwide.

So, while Jackson Lee conveniently “forgot” that part — non-COVID patients, as well — my anecdotal observations of several friends and acquaintances who died from COVID-related complications showed that every one of them had underlying pre-existing conditions, ranging from obesity to diabetes, respiratory or heart problems, and several autoimmune diseases.

I say only this: Sheila Jackson Lee is using a broad-as-hell brush to paint a specific picture that doesn’t exist —in and of itself — for the sole purpose of once again seeking “reparations” that would cost U.S. taxpayers between $10 trillion and $12 trillion, or roughly $800,000 for each “eligible” Black household.

As noted by The Blaze, Jackson Lee is the sponsor of H.R. 40, the Commission to Study and Develop Reparation Proposals for African Americans Act. The bill was first introduced into Congress by Democrat John Conyers in 1989. The bill’s purpose:

This bill establishes the Commission to Study and Develop Reparation Proposals for African Americans. The commission shall examine slavery and discrimination in the colonies and the United States from 1619 to the present and recommend appropriate remedies.

The commission shall identify (1) the role of the federal and state governments in supporting the institution of slavery, (2) forms of discrimination in the public and private sectors against freed slaves and their descendants, and (3) lingering negative effects of slavery on living African Americans and society.

Jackson Lee’s bill only cleared committee once, in April 2021.

The Democrat Party, which has been hellbent to redistribute wealth in America for six decades, or more, remains at odds between two wise observations from two wise men.

There is all the difference in the world between treating people equally and attempting to make them equal.

Hence, the Democrats’ current codeword “equity” has replaced “equality.” Why?

British playwright George Bernard Shaw, a socialist advocate who disdained capitalism, advocated the following words of wisdom to fellow socialists of his time:

A government which robs Peter to pay Paul can always depend on the support of Paul.

Therein lies the cornerstone of today’s Democrat Party, gang. Sheila Jackson Lee, Joy Reid, and other race-hustling hacks are merely attempting to take a larger piece of a redistributed pie.

Florida woman Amanda Ramirez is suing Kraft Heinz Foods Company after her cup of microwavable macaroni and cheese took longer than 3.5 minutes to be … END_OF_DOCUMENT_TOKEN_TO_BE_REPLACED

China has been locking its citizens down for over two years under its zero-COVID policy, and it's becoming more and more clear that this isn’t just … END_OF_DOCUMENT_TOKEN_TO_BE_REPLACED

Famed comedian Jay Leno has struck again, but this time, no one's laughing. At least not heartily.As he has regularly for the last three decades or … END_OF_DOCUMENT_TOKEN_TO_BE_REPLACED

A recent report by CriticalRace.org found that 58 of the top 100 medical schools in the United … END_OF_DOCUMENT_TOKEN_TO_BE_REPLACED

Shelby County is a speck of blue in ruby-red Tennessee; one of just four counties to vote for … END_OF_DOCUMENT_TOKEN_TO_BE_REPLACED

Who knew that the free press was so anti-free speech? I mean, I guess we all did to some extent, but … END_OF_DOCUMENT_TOKEN_TO_BE_REPLACED