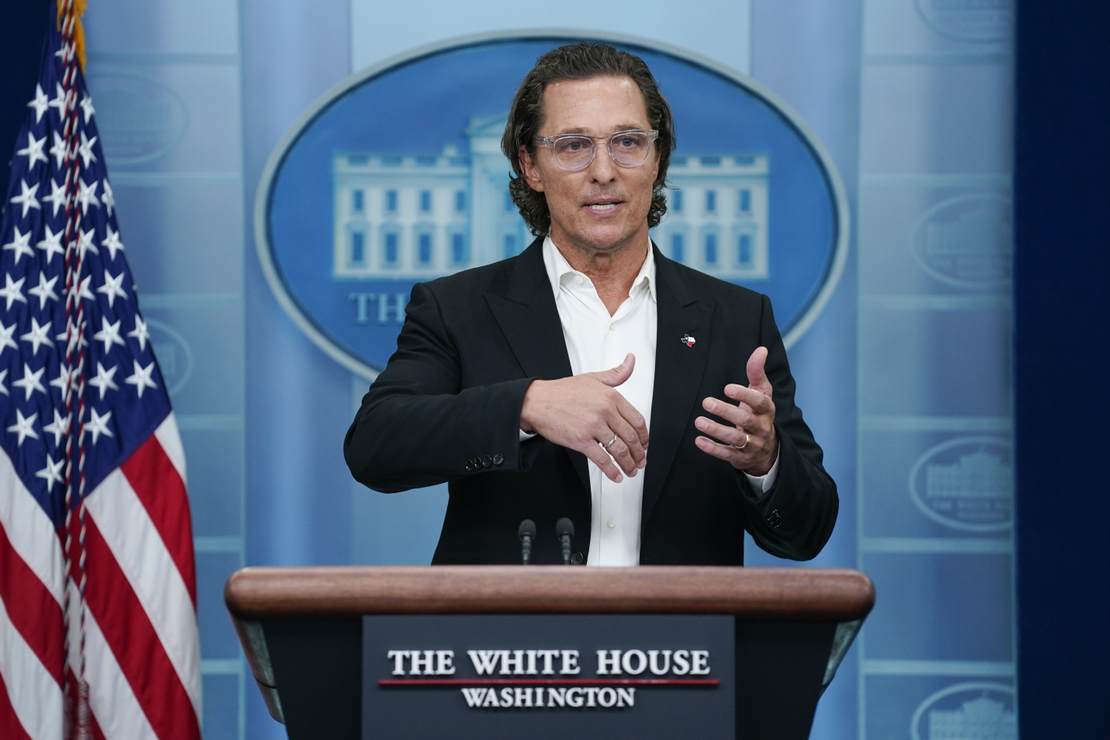 In this episode of Hollywood Actors and Visions of Grandeur…

As we reported in June following the Uvalde school massacre, Uvalde-born Hollywood heavyweight Matthew McConaughey penned an op-ed for USA Today in which he talked about gun “responsibility.”

There is a difference between control and responsibility. The first is a mandate that can infringe on our right; the second is a duty that will preserve it. There is no constitutional barrier to gun responsibility. Keeping firearms out of the hands of dangerous people is not only the responsible thing to do; it is also the best way to protect the Second Amendment. We can do both.

Fair enough. Depending on one’s definition of gun responsibility, that is.

But, as my colleague Streiff wrote at the time, McConaughey, during a White House press room lecture to America, “sold the White House’s gun-grabbing agenda today, just like he has for years.”

McConaughey’s time at the White House press briefing room lectern was interesting and perhaps even effective in convincing the mushy middle and go-along-to-get-along Vichy Republicans to abandon the Second Amendment. I say that because some of the hosts on Fox News were tripping over themselves to declare it a sign that we have entered a “new moment” where gun grabbers and law-abiding gun owners can realize the prophecy found in Isaiah 11:6.

There were two parts to McConaughey’s speech. The specific proposals, he spelled out in a USA Today (do real people, other than hotel/motel residents, read this paper?) op-ed, and were covered by my colleague Bob Hoge’s post titled Matthew McConaughey Op-Ed Calls for Gun ‘Responsibility’ After Uvalde. The basic points are the same tired, old stuff that has been around for 20 or more years.

The actor ticked through several “requirements.”

As Streiff noted, McConaughey’s “basic points are the same tired old stuff that has been around for 20 or more years.”

So where has all of this led? The Hollywood A-lister told attendees at San Francisco’s Dreamforce conference this week he would “be arrogant not to” consider a future White House bid. It should be noted that McConaughey, who has never publicly identified with either major party — should we guess? — did not say what his time frame would be, but he didn’t rule out 2024, as reported by SFGate.com.

Yeah I’ll consider it in the future, I’d be arrogant not to, absolutely I would consider it. If I got into any form of politics I’d be remiss not to also go in as an artist and a storyteller; help put a narrative together. You’re the CEO of a state and a nation, a lot of compartmentalization and choices to be made. They scare me but I’m not afraid of ’em.

Got hubris, Matthew? Much less a modicum of understanding about the requirements of the presidency, vs. the “artistic storytelling” talents of a person who makes a living pretending to be other people? That’s not to say Democrats aren’t outstanding “storytellers” [liars], of course.

The “Dazed and Confused” star then played the “patriotically drawn to public service” card:

If that happened to me I would be pulled into it. If I’m living right, which I’m trying to, we get pulled into things … it’s inevitable. I didn’t choose it, it chose me.

Oh, please. What, “If destiny calls, I must respond to that call”? Not quite like Beto “Clueless Skater Dude” O’Rourke’s silly “I was born for this” line as he began his spectacularly-failed bid for the 2020 Democrat presidential nomination, which he promptly abandoned after running out of money, but damn close.

To be fair, perhaps we should take McConaughey at his word (for now) when he suggests extreme political polarization is gripping the country. That is correct. But the actor also suggested there’s room for someone who can reach out to “reasonable folks” on both sides. The question is, from which side would the Hollywooder reach out?

There’s definitely a greater divide now than there has been. One thing is we have to admit that part of that divide is the Kool-Aid we’re being sold. The divide is not as thick as we’re being sold; most of us are much more near the middle than we’re being told.

That observation is also correct. The problem is, each extreme insists that only the other extreme is drinking the Kool-Aid.

After all, Joe Biden was at one time a “moderate Democrat,” which he assured us during his January 2021 inauguration address was how he would run his presidency. That now-worthless pledge to pursue “unity” during “a time to heal for America” nonsense. How’s that worked out, so far?

While McConaughey is certainly no Lyin’ Biden or radical leftist, he is a Hollywood actor who appears to at least lean to the left. And make no mistake: that Hollywood actor is no Ronald Reagan.

Police officers in Milwaukee don’t seem to trust their sidearms. They carry the Sig Sauer P320, a firearm popular with a lot of people and basically … END_OF_DOCUMENT_TOKEN_TO_BE_REPLACED

As if Washington, DC, wasn’t dysfunctional enough, the city’s deputy mayor has been arrested and charged with assault and battery. According to Fox 5, … END_OF_DOCUMENT_TOKEN_TO_BE_REPLACED

As my colleague, Sister Toldjah reported, there were some memorable moments during Joe Biden’s remarks while visiting Florida on Wednesday to survey … END_OF_DOCUMENT_TOKEN_TO_BE_REPLACED

President Joe Biden made a vulgar comment that was caught on a hot mic during his review of the damage from Hurricane Ian Wednesday. Biden arrived … END_OF_DOCUMENT_TOKEN_TO_BE_REPLACED

The FBI has raided the home of a pro-life activist in connection with a protest that took place in March of 2021. Other participants at the event were … END_OF_DOCUMENT_TOKEN_TO_BE_REPLACED

The right of self-defense is, generally, about as non-controversial as you can get. Even vehement … END_OF_DOCUMENT_TOKEN_TO_BE_REPLACED

The FBI is out with its numbers for murders and other violent crimes over the past year. The numbers … END_OF_DOCUMENT_TOKEN_TO_BE_REPLACED

After President Ronald Reagan was shot in 1981, as he was about to undergo surgery, he joked to the … END_OF_DOCUMENT_TOKEN_TO_BE_REPLACED

According to a recent report on active shootings released by the FBI, armed citizens have stopped … END_OF_DOCUMENT_TOKEN_TO_BE_REPLACED

When the magic words “vote fraud” are mentioned, what comes to mind for most people, no matter their … END_OF_DOCUMENT_TOKEN_TO_BE_REPLACED