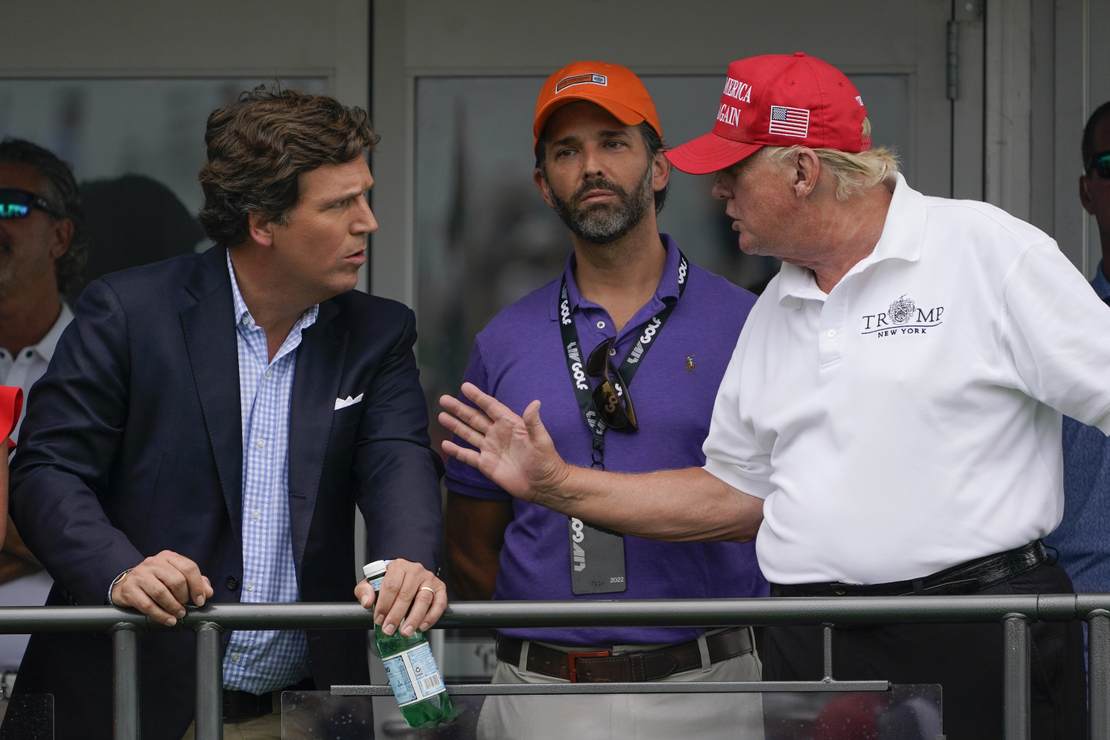 News of dozens of subpoenas being sent by the DOJ to Trump supporters broke on Friday and was finally confirmed on Monday. The subpoenas, which were ostensibly tied to investigations surrounding January 6th, targeted over 40 people. Two more phones were seized from Trump associates as well, including his in-house counsel.

It marked another move in what appears to be a highly politicized investigation targeting the political enemies of Joe Biden for nothing more than wrong-speak. Backing that assertion up was Tucker Carlson, who obtained some of the subpoenas and provided some of the disturbing demands within them.

In the clip, Carlson provides an excerpt from the subpoena that purports to define what the current investigation is about. Here’s how that reads.

Any claim that the Vice President and/or the President of the Senate had the authority reject or choose not to count presidential electors.

To put it frankly, it is chilling to think that the DOJ could base an investigation on something that is clearly under the bounds of free speech. And to be clear, it is completely irrelevant whether Mike Pence had the above-mentioned authority or not. Americans are allowed to hold opinions, and they are allowed to discuss those opinions, even if they don’t hold up to factual scrutiny.

It is a violation of the First Amendment for the government to criminally target individuals based simply on what they said unless it is a direct incitement to violence or a threat. Nothing about that passage is either of those things. In other words, the DOJ is firmly in the territory of trying to prosecute thought crimes.

There’s also the issue of precedent here. Carlson brings up the fact that the DOJ did not seek to go after leading Democrats in 2016 that sought to stop the counting of electors for Donald Trump. He’s correct, and it’s a blind spot in all this that is simply being ignored because it’s convenient to ignore. That January 6th occurred at the hands of protesters does not suddenly make wipe out the free speech rights of others.

The Fox News host then lists some of the names these subpoenas are targeting, including Stephen Miller and Jenna Ellis, but the most shocking is Boris Epshteyn. That is Trump’s current lawyer. Yet, the DOJ is demanding his communications, many of which are privileged, with a wink and a nod promise to sort through everything. That’s banana republic stuff.

I’ll end with something Carlson mentions near the beginning of the clip, which is that there is no accountability or transparency being demanded in the face of all this. Instead, the American press, with few exceptions, is spending its time either ignoring these overreaches or outright supporting them. That’s terrifying because it feels like we’ve reached a place where anything goes as long as seeks to harm Donald Trump, and it won’t stop there. These precedents being set are going to be abused by left-wing officials long into the future. It’s another reason why Republicans must retake the White House in 2024 and that there must be a will to gut these out-of-control agencies.

A libertarian group filed a lawsuit on Tuesday challenging the legality of the Biden administration’s federal student loan forgiveness plan. The group … END_OF_DOCUMENT_TOKEN_TO_BE_REPLACED

When we last left Congressional representative Katie Porter (D-CA), RedState revealed that she benefited from lower-cost housing in the high-rent … END_OF_DOCUMENT_TOKEN_TO_BE_REPLACED

With a tempest bearing down on Florida Politico tries a pre-emptive hit on Governor DeSantis and drowns in failure. The press sometimes just cannot … END_OF_DOCUMENT_TOKEN_TO_BE_REPLACED

While normal people are watching the approach of Hurricane Ian towards Florida with dread, the national press seems downright excited that they might … END_OF_DOCUMENT_TOKEN_TO_BE_REPLACED

New York City has historically been the American city with the most gun control. Not only does state law hold there, but the city has its own brand of … END_OF_DOCUMENT_TOKEN_TO_BE_REPLACED

NASA successfully crashed a spacecraft into an asteroid Monday, in a demonstration of “the world’s … END_OF_DOCUMENT_TOKEN_TO_BE_REPLACED

Among the many anti-gun bills recently signed by California Gov. Gavin Newsom was a measure aimed at … END_OF_DOCUMENT_TOKEN_TO_BE_REPLACED

President Biden continues to look weak in front of world leaders. This is not only a bad look for … END_OF_DOCUMENT_TOKEN_TO_BE_REPLACED

In a court filing on Tuesday morning, the Pacific Legal Group filed the first lawsuit against the … END_OF_DOCUMENT_TOKEN_TO_BE_REPLACED