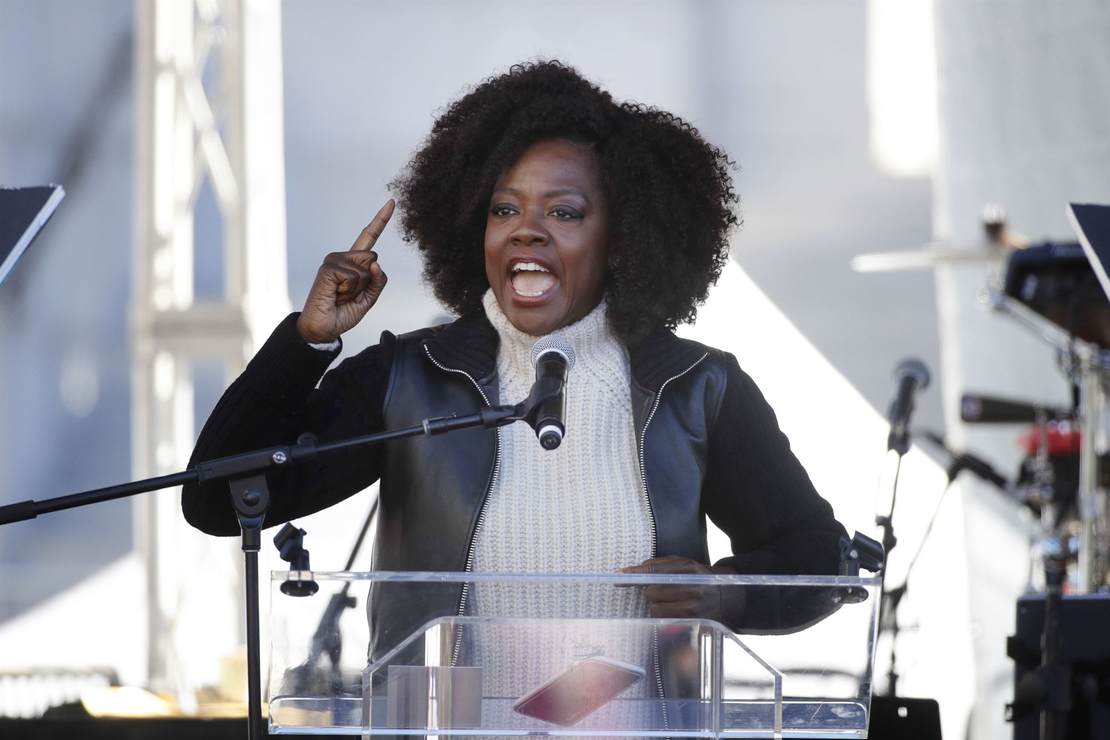 On Monday, I reported that many fans were attacking the black female-led film “The Woman King” and while its defenders attempting to make it out to be an onslaught from racists and sexists, what isn’t being publicly talked about much is that a lot of the backlash is coming from the black community.

The reason for the anger is that the film centers around an all-female group of warriors called the “Agojie” who fought for the “Dahomey” kingdom in the early 1800s. According to the film, the Dahomey were on the front lines of pushing colonialist white people out of Africa who were out to enslave the African people. However, in real life, the Dahomey and their female warriors were actually known for raiding African villages, brutally torturing and killing those who couldn’t be used, and selling others they captured to slave traders.

This had many people, including the black community, angry that Hollywood was glorifying the very people we all agreed were the bad guys.

(READ: ‘The Woman King’ Has the Black Community Boycotting It for Lies Both In and Out of the Movie)

According to lead actress Viola Davis, a lot is on the line and if this film doesn’t see success then there will never be another black female-led movie in Hollywood again. This is, of course, sensationalist nonsense used to both scare and guilt people into seeing the film, but these supposed “stakes” are now causing Davis to turn around and defend the accusations leveled at the movie directly.

According to Variety, Davis and her husband Julius Tennon said that the movie was “edutainment” and that they had to take liberties with historical accuracy in order to make the movie.

“We entered the story where the kingdom was in flux, at a crossroads,” said Davis. “They were looking to find some way to keep their civilization and kingdom alive. It wasn’t until the late 1800s that they were decimated. Most of the story is fictionalized. It has to be.”

“We are now what we call “edu-tainment.” It’s history but we have to take license,” he said. “We have to entertain people. If we just told a history lesson, which we very well could have, that would be a documentary.”

Right off the bat, you can probably see the massive issues in their defenses.

For one, fictionalizing stories is pretty typical for Hollywood, but even when the changes are great the story more or less tries to stay the same. It’s what made the story worth telling in the first place. A solid example of this is Ridley Scott’s “Kingdom of Heaven” which portrays the fall of Jerusalem to Saladin. While functionalization did indeed happen, many of the general story beats were kept on target. Characters remained who they were in essence and the historical context was largely kept intact.

This is not the case in “The Woman King” which injects heaping doses of message-first movie-making into the film and takes a very important defining trait about the kingdom it’s talking about and tosses it for modernity’s sake. The rules of social justice filmmaking are absolute. An African kingdom with female warriors cannot be considered villainous by modern standards.

In short, the movie is lying and it’s lying about one of the worst possible things it can do in order to deliver a girl-power movie with black people as the sole good guys. If slavery is one of the worst things that ever happened to black people in their history, then conveniently turning a blind eye to it isn’t going to win hearts.

To put this into perspective, let’s play one of my favorite games: “Swap it.”

What if I put together a movie called “The European King” and told the story about a guy named Adolf Hitler who just wanted to lead his people out from under the boot of an allied force that kept his country and people in poverty, and began fighting a war that would turn into a bloody conflict to allow his fellow Germans to flourish?

The amount of backlash this would receive would be deserved. Hitler was, of course, one of the bloodiest dictators in world history and committed atrocities against the Jewish people that would echo for generations.

While Hitler’s destruction of human lives far outpaced that of the Dahomey, the comparisons are there to be made. The makers of “The Woman King” would have done far better to have just made a movie with a fictional African kingdom, but they wanted that “based on a true story” tag on their film because rewriting history to give their ideology historical backing was worth its weight in gold.

I guess they just counted on people being stupid or willing to look the other way. Sadly for them, they got neither.

With social justice advocacy being the main marching order for Hollywood, the movies that it releases are next to guaranteed to be leftist message carriers. Nine times out of ten, these flicks are going to follow certain rules that make them predictable, boring, and insufferable.

One of the more popular defenses to a lack of viewers and copious criticisms is to claim that the film suffers from some societal lacking. Racists, sexists, and bigots are just so populous and so powerful that any movie featuring “diversity” or “women’s empowerment” is automatically trashed, bashed, and discarded.

Never mind the movies with primarily black casts and women-led films that do well. It’s the white patriarchy’s influence over society.

The release of “The Woman King” has awoken this fight on the internet once again. The film is facing controversies left and right and the usual defenses have been mounted. However, two things about the movie stand out like a sore thumb and both of them are lies. The first is about the film’s subject and the other is about how it’s being received.

To give you a heads up, “The Woman King” concerns the story of a real-life African kingdom of “Dahomey” in the early 1800s. The focus is put on an all-female warrior group called the “Agojie” and their efforts to stop colonialism and slavery.

Only that’s not what happened historically and both the right and many in the black community seem to be finding issues with it. In fact, it spurred the creation of the hashtag #BoycottWomanKing on Twitter.

According to Bounding Into Comics, many are angry about the portrayal of the main character and her tribe as heroes when really they were brutal enslavers of their fellow Africans:

In reality, the Dahomey were one of the most prominent slave trading states of their time.

According to History vs. Hollywood, the Dahomey not only “conquered neighboring African states and took their citizens as slaves, selling many in the Atlantic slave trade in exchange for items like rifles, tobacco, and alcohol,” but it was their engagement in this trade that “brought Dahomey most of its wealth.”

Regarding the Agojie themselves, the website notes that “The Agojie (women warriors) fought in slave raids along with the male fighters.”

“There are accounts of Dahomey warriors conducting slave raids on villages where they cut the heads off of the elderly and rip the bottom jaw bones off others,” History vs. Hollywood further details. “During the raids, they’d burn the villages to the ground. Those who they let live, including the children, were taken captive and sold as slaves.”

It shouldn’t be lost on anyone that the slave trade that the left loves to bring up as the reason white people should feel continuous guilt actually had an African nation with an all-female tribe involved in the sale and movement of Africans across the Atlantic. Moreover, they brutally murdered anyone who wasn’t useful during these raids.

There are other complaints as well. The movie follows the rules of modern woke films. John Boyega plays a king but he’s neutered in order to make the women around him seem more powerful and independent. This makes the film pretty predictable and wildly unbelievable.

The second lie is taking place in the reviews.

As Ryan Kinel of RK Outpost noted in a recent video, audience reviews have this film at a whopping 99 percent, which is ultra-rare for Rotten Tomatoes. As of this writing, the score still stands.

However, as Kinel points out, this score seems a bit off when you head to other websites. On IMDB the score sits at 5.9/10. On Metacritic, the film is only 2.8.

To be fair, the film brought in $19 million box office in its opening weekend, making it the number one film in America, but even with that level of participation, it’s highly unlikely that the film would achieve the perfect scores Rotten Tomatoes is saying it’s getting.

We have to wonder why Rotten Tomatoes is doing this and/or who is paying them for it.

In the end, this is an absolutely perfect example of Hollywood going to extremes to push a lie in the name of social justice. This tribe’s status as noble freedom fighters is about as realistic as their film’s Rotten Tomato score. Moreover, they are willing to glorify African slave traders just because they had female soldiers, making it clear that one of the worst sins in human history is forgivable so long as you have the right skin color and genitals.

With each passing day, the media narrative of a “Democrat comeback” ahead of the midterm elections drifts further and further away from reality. This … END_OF_DOCUMENT_TOKEN_TO_BE_REPLACED

The mainstream media isn’t too happy with me after I denounced Amazon’s attempts to DEI Tolkien’s works. Piece after piece has come out accusing me of … END_OF_DOCUMENT_TOKEN_TO_BE_REPLACED

Dr. Leah Torres who describes herself on Twitter as an "OB/Gyn providing evidence-based medicine" and a "Sex-positive, gender-affirming repro health … END_OF_DOCUMENT_TOKEN_TO_BE_REPLACED

Some bad news on the legal front on Monday from the Supreme Court. The Supreme Court has declined to hear a case challenging Joe Biden’s vaccine … END_OF_DOCUMENT_TOKEN_TO_BE_REPLACED

"The Handmaid's Tale" is a story of a dystopian future in the United States where women are reduced to property of the state, birth rates plummet, and … END_OF_DOCUMENT_TOKEN_TO_BE_REPLACED

A Christian nurse in the United Kingdom is suing a health clinic in North London, claiming the … END_OF_DOCUMENT_TOKEN_TO_BE_REPLACED

On Monday, Planned Parenthood officials announced plans for a mobile clinic that will travel to the … END_OF_DOCUMENT_TOKEN_TO_BE_REPLACED